Unlike the average person, whose greatest fear is accidentally dropping their cell phone in a toilet, my greatest fear is something far more devastating. I live in constant fear that I might one day accidentally kill Ray Charles. And unlike losing a measly cancer magnet in a human waste receptacle, my fear actually has long-term consequences. Ray Charles is a famous musician, cultural icon, and all around beloved figure. Killing him would not only be wrong, but it would also probably be in bad taste. He's a helpless old man, and I'm a nearly able-bodied young hoodlum. 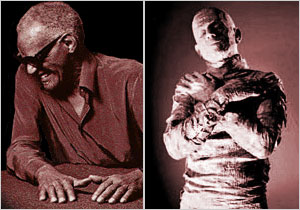 THE RESEMBLANCE IS UNCANNY!You're probably asking yourself why I would fear accidentally killing Ray Charles, and that's pretty valid question. To answer your question, I must first counter your question using simple trickery – such as slight of hand, or perhaps a well-placed punch to the forehead – and then ask you this question: are mummies dangerous? And hold on a goddamn time span of sixty seconds, because I'm not talking about the kind of mummies you see in museums. I'm talking about the real deal – walking, grunting, and flailing arms slowly in your direction. I'm talking terror rapped in a package so tight, it may as well have been that crappy shirt eight sizes too small you got for Christmas. Starting to see the bigger picture? Yeah, well on top of all that, mummies also carry curses. What kind of doctor do you know of that can treat an ancient curse? And don't say Jesus, because he was a carpenter and it would be illegal for him to practice medicine.

Chances are, you answered yes to my question, agreeing that mummies are dangerous. So when you see a mummy wandering around, undoubtedly towards the nearest, most attractive woman, you're going to try to stop it. As an American, I consider it my civic duty to smash democracy into the gullet of any theocratic undead monstrosity I see. And so should you, provided you're an American. If you aren't American, contact your government and ask them their policy on mummies.

Of course by now you're wondering what the hell this has to do with Ray Charles. Well, Ray Charles happens to look an awful lot like a mummy in his current state. Plus his old, wavy voice doesn't exactly make him sound like a none-mummy. Oh, and watch the guy walk around! He wanders around like he can't see where he's going, which is EXACTLY what a mummy would do! I don't have anything against Ray Charles, but I fear that if I ever saw him in real life, I'd most certainly mistake him for a mummy.

I can see it now, clear as day. Ray Charles would be wandering down the road with his arms held in front of him, moving slowly and unsurely while mumbling incoherently to himself. I'd see him, and fearing that one of my nation's many attractive women might be in danger, I'd run at him with whatever blunt object I might happen to have with me. Since my watch broke, I've been carrying a grandfather clock with me, so I'd probably smash his not-quite-mummy brains into the ground with that. It would all happen in the blink of an eye, and I'd feel like a hero. But then I'd realize something was wrong. Everyone would stand there staring at me as I tower over the broken, not-quite-mummy body and grandfather clock pieces, and look on in horror. I'd suddenly realize my worst fear came true. I killed Ray Charles thinking he was a mummy.

Artist depiction of my worst fear actually happening!I can't begin to explain how frightening it is to replay that horrible vision in my mind, occasionally rewinding it to watch how funny it looks backwards, but mostly watching it going forwards frame-by-frame. Each blow I inflict comes back to haunt me, not as physical pain, but as crotch-searing emotional pain. The kind of pain most women must feel when they realize they didn't do a good job cleaning the house or cooking dinner.

I don't know how the world would treat me if my greatest fear ever came true, but I imagine it wouldn't be good. Who cares that I thought I was doing the right thing? The image of a broken Ray Charles would be enough to seal my fate and reputation forever. So now young child-like human, take your petty fears of public speaking or falling into a vat of carbolic acid and laugh – laugh knowing your fears are nothing. I know true fear, and I have stared it in the face-like area. True, maybe my eyes did wonder down out of curiosity, but I mostly stared it in the face area.

Finally, I think it's high time that Americans get together and make sure Bob Hope dies. Not because he looks like a mummy or anything, but because it's just time.

Fresh from attending the premiere of his latest Hollywood blockbuster, Fragmaster has uploaded the second to last Fireman Comic! Yes, you read that right, I said second to last! One of the longest running comic strips of all time and space is coming to an end. Fragmaster, Fireman Comics dedicated curator has apparently run out of comic strips to restore. Either that, or his shameful chocolate frosting addiction has devoured his work ethic.

Now direct your posterior on over to the Fireman Comics page for more Fragmaster and Fireman Comic excitement!