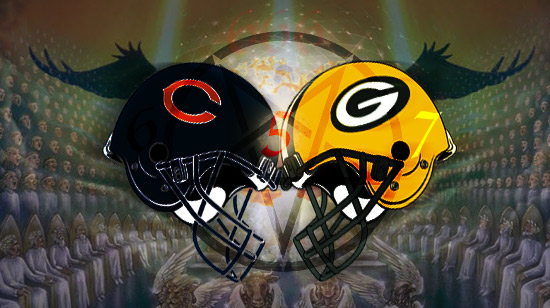 My companions are mostly gone, dead in so many ways, devoured, or simply disappeared in the night like dreams that fade when you awake. I only know my allegiance by the last scraps of my Feelin' So Fly Like a Cheesehead shirt wrapped around a festering wound on my leg.

The gruesome attrition of the days have forced the game into a stalemate. The rotten stench of it, my love. I am so glad I gave your ticket to my best friend, Huck. He is dead. Wandered onto the field during the game, deliriously searching for food. Last I saw Caleb Hanie was wearing his skin as a poncho.

All of the running backs from both teams lie concussed upon the frozen concrete of Soldier Field, a sickening mass of limbs, no longer identifiable by team. Kuhn is human centipeded into Matt Forte. Chester Taylor is just a face with eyes madly rolling amidst torn ACLs. He's babbling about the Vikings. The referees have gone feral, throwing flags stitched with pieces of meat to draw us out, then falling upon the unwary with horse collars and devouring them alive. I've seen it happen. I've heard their exultant whistles.

There are so few of us now, hiding in the stands, praying at the crude altar we built to Favre. We used to pray to Rodgers. He used to come to us at night with cheese curd and Jalapeno poppers. We haven't seen him in days. We can hear Julius Peppers moving through the stands searching for something to eat. Some of the men with me think you can hide from him by remaining perfectly still, but I know better. He can hear your heartbeat. The only way to stop Peppers is to stop your own heart. It is a skill many of us learned from our fathers in Wisconsin.

Jay Cutler wears his weird, sidelined fatso shirt and serves a seven-eyed goat that lactates insulin from its scabrous nipples. Some say it's related to the Cubs, but I don't buy it. Cutler lays in its arms, blinded by his neuropathy, suckling so loudly we can hear him, and in between sugary mouthfuls he mutters about picks. He howls and launches wild passes into the stands. Greg Olsen is out there somewhere, untouchable, searching for balls to grasp in his tiny, T-rex-like arms.

The last score I remember was a 700-700 tie, but that was before the game degenerated into a daily blood ritual between Urlacher and Matthews. They and their lines emerge from their tunnels bathed in blood, dressed in the pelts of their victims, and they clash from sun up till sun down. Any man or woman caught on the field during their battle will be rent limb from limb, their bodies hurled into the stands to feed the kickers who have formed their own clan and speak their own language.

The players are hardly our only danger. Great slabs of ice fall from the heights and crash down into the stands. Snow is piled several feet high, stained red where men have been slain. At night the howling winds carry Cutler's cries throughout the stadium and extinguish every candle or fire we have lit.

Lovie Smith watches all this from the sidelines. His face betraying no emotion. I sometimes wonder what he is thinking, but fear that if I look upon him too long his head will slowly rotate to face me and I will cease to exist.

I don't know if this will ever reach you. I plan to give it to Todd Collins who seems to be the only man here unaffected by this madness. He wanders around in shorts and a t-shirt, eating hot pretzels, carrying a playbook he never opens. I hate to entrust this to a Bear, but unless Aaron Rodgers returns to us I fear that I must.

God save me and God save Green Bay. If only Aaron would return to us. If only he still loved us. Maybe...maybe I am him. I don't remember anymore.