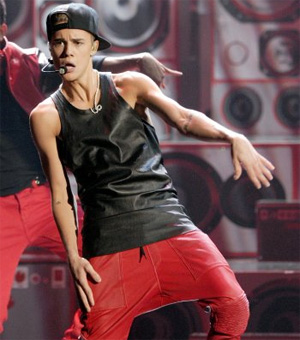 I knowed Jazzy Charms by the name Jacques Ducharme, grown up Natchitoches in de crook of de Cane river and come to Baton Rouge wit nothin' but a gleam on dem eyes. Straight off he stoled my girl. I was in good with miss Odalie Pretieux after much courtin' an for I know what's doin he arm in arm wit my Odalie. She was sweet as juga keen and he was on her like funk on de moufette.

I can recover from losing my lady to de spells, but all de same I went to call upon her and caught him bein' throwed out her boardin' house. I reckon he got over familiar with her too quick. I was spittin mad and followed him intending for a confrontation. Instead I caught him in de consortations with de spooky bird.

You think voodoo, but I know better. This is Salem witching, M. Usher. The devil come to Jacques Ducharme as that spooky bird and they biddy wrassled under a bayou moon. An after that I follow him and he done gone back to Natchitoches and laid up an ag. Don' ask me what ways he done it. A gentle man will not speak of that but suffize it to say it involved a reach into a privy john. 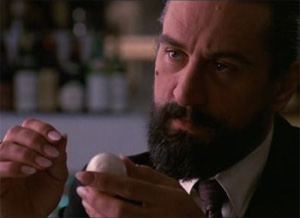 When he crack open that ag a puff of red smoke come out and I heared the devil hisself give out a laugh. Sound just like Vincent Prix from de Thriller. The very next day I went to call on Odalie and all her hair done fell out. I tried to calm her down, comfort her, but she throwed herself off Loopey Long bridge on account of Jacques Ducharmed saying hurtful things to her.

Dat precious bebe you got, M. Usher, he under the sway of de true devil. Jazzy Charms ain't not but a hateful magicien.

There only two way you can do to get yerrself rid of the real devil. One is get a priest. Not no California priest neither. You call out to the Vaticams or to Bayou L'Ourse if they got the telephone fixed at Callume's shack. 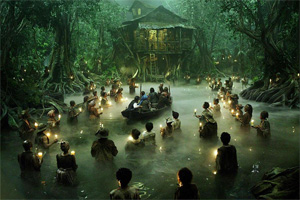 Let it ring twelve time. If dey pickup, ask for Papa Poche and he will get on de hairplane and fly hisself to you and de bebe. Do a blessing on de bebe and ward off devil works.

Other way is you got to fiddle 'gin him. Ya got a fiddle? Ya go right on up to Jacques and ya say, "Devil, I challenge ya to fiddlin' for this bebe's immortal souls."

Devil can't resist a wager. When he get out that fiddle you just gwon and put him in a sack. Ya heared right again. Put a big ol canvas hog sack on dat devil an you throw him in a river. Don' think you done a mudha. You gwon check dat bag in de morrow. Ain't nothin' but a bad smell in it.

M. Usher, I hope ya got it in ya to save dat bebe. All my heart is tied up in knots with worries. Time enough once he well to worry about de songs. Save de bebe.