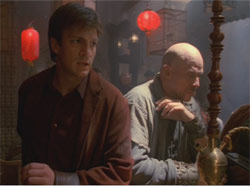 Gorram ah kua is humped without the likes of me.I first pressed palms with lan jao bin Mal Reynolds on a planet whose name I can't remember, in a town I don't remember, drinking away the last of the coin in my pocket at a dive I can barely remember. I do have some recollections of an appalling whiskey, but it was cheap and eatin' a hole in my belly.

My last gig, before meetin' the esteemed Cap'n Renyolds, was an engineering hand aboard an Alliance freighter. No story to how I lost that one, no reavers or anything like that, just me and the Alliance don't mix. They're all about wearing stupid hats and I'm all about not doing exactly whatever it was they wanted me to do.

So there's me, Hickory Burnsides, with zero prospects and hardly two plug nickels to rub together, drowning my sorrows on some planet wedged in the chui kank of the 'verse. In walks my supposifyin' salvation, browncoat war-hero, smuggler, and ship's captain: Malcolm Reynolds.

Well, define good, but sure as Shakespeare that's me he's talkin' to and he don't even know it. I raise up my hand and motion him over, do the introductions like. He tells me he's got a first-officer and a pilot, but what he needs is someone can fix their broken ass engine.

"Firefly class," he says with a gleam of pride, "she's old and persnickety, but I do love her."

Now I ain't never one not to rise to the occasion, so I up and told him I knew all about Fireflies. Spun a right tall tale for the man, years of experience is what I tell him.

"Down the last of your tarantula juice, get your hot roll and let's mosey," he actually said to me.

Ain't never heard none of them terms before, but I'm willing to broaden my slang horizons or my name ain't Hickory Burnsides. Then I think he said something in Chinese about my mother. On account of I figured it would at least be interesting, I followed him out of the bar.

That's how I got aboard Serenity. Y'all said you was prospectin' for a story about workin' as a grease monkey? Right, well, I'll tell you the tale of my time aboard that ship, and why everyone aboard her can gum lim pay eh lan jiao. 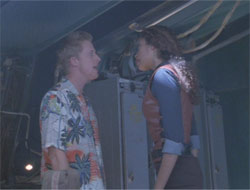 These two. Not fond of them.Cap'n Reynolds introduced me to the crew first. Some goofus in a floral shirt and his pan-racial girlfriend. Apparently the split-tail and Reynolds fought together at the battle of Serenity Valley, wherever that is. Reynolds said she's a woman you can tie to, which I reckon means he trusts her.

Not my sort of folk, I s'pose, but I weren't complainin' on account of they weren't no Alliance. No uniforms or stupid hats, no standin' to attention when certain folk is around. I recall on one occasion we had to stand to attention for half a day because some shucks what looked like they was gonna clean under a sink was around. They was wearin' blue rubber gloves and I figured them for touched but I guess in the Alliance blue kitchen gloves outranks the little hat with the banana on the front. Go figure.

Nevermind. On the subject of introducin' that's about all that needs said. Then Cap'n Reynolds showed me the ship.

This ship's engine appeared for all the 'verse to be made out of rust and steam pipes, had a weird propeller what turned on the inside of the ship, and I think it had mold growin' on it. Cap'n Reynolds told me he needed it fixed pronto so they can get back in the black. I bit on my lip as opposed to tellin' him my mind which was he better buy real estate because his junk pile would turn to dust afore it saw the other side of any atmo.

On account of my self control on the subject of strangulatin' employers I bit on my wise mouth and told him it were all shiny.