Blue Stripe: The Life and Times of a Zion Tech Support Operator 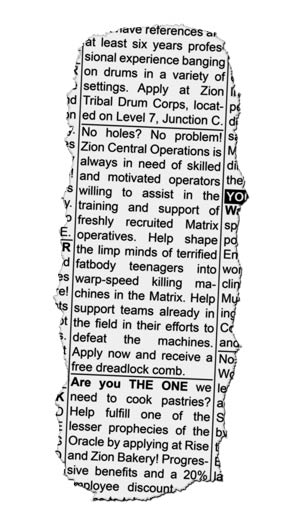 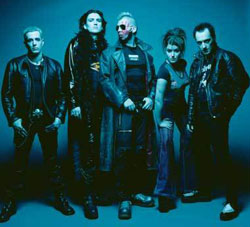 Me and a few of my friends in support. Well, not my friends, but they're the people who sit near me and don't wear see-through mesh shirts every day. I can't eat lunch with those people.I am 36 years old, 40 pounds overweight, my name is Asmodeus, and I am a tech support operator. I was born in Zion, the last and only free human city. I'm not wired for the Matrix. I'm not a red pill, and that means my whole world consists of caverns, giant industrial fan blades, inadequate lighting, and rusty surfaces.

My gripes with this shithole and the pretentious dickheads that live here could fill 50 volumes, but I think I can give you a summary of my feelings.

When I sleep I dream that I am one of those mechanical squids with the glowing red eyes, pulling them all limb from limb. I don't really feel all that personally invested in the war against the machines. Ask me on the right day and I might just admit that I sort of hope they win.

From what I understand, this is supposed to be more about my job and less about my personal life, so I'll try to focus in on that.

I have worked as a tech support operator doing helpdesk and general troubleshooting for the last six years. Before that I worked as a sludge farmer in the sump district. You know that tasteless glop everybody eats? It's a processed fungus that grows on top of decaying sewage. Bon Apetite!

Some of my friends resent the fact that I got the job with Zion tech support. They think it's all glitz and glamour and that I'm some hotshot hero leaving the hard working folk behind. These friends have never been to Zion tech support.

It looks like an abandoned factory. The ceiling is like fifty feet up and there are these pathetic fluorescent lights that hang down and barely illuminate anything. We may have fifty different computer monitors each, but we work inside of rusty metal cubicles.

The floor is a greasy grate that occasionally releases bursts of noxious chemical smells. We work 16-hour shifts with one break for lunch (that tasteless glop I mentioned) and to get in or out we have to ascend a slippery four-story metal staircase that has no railing. If Zion had an Occupational Safety and Health Administration one of their inspectors would catch on fire if he walked in here. 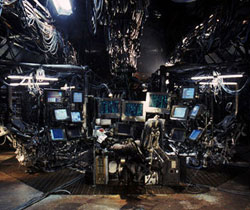 This is my work area. No accident that it looks like a futuristic S&M device.Did I mention the drum and bass music they play over the speaker system? The warning siren when there is an accident is a relief from the monotony. Last week a guy got his foot crushed in a computer. I don't even know what to say about that.

The average day for me is just a routine of loading skills for the newbies and trying to figure out why some guy in the Matrix running from the cops is trying to karate chop his way through a brick wall. Occasionally, there is a hardware glitch, but it's usually the fault of the ingrates from the programming factory.

As you can probably infer, my work is fairly repetitive and, therefore, soul draining. I mostly help people train for becoming a Matrix operative or provide support for teams in the field who lose their operator or need an additional operator. We work on the ticket system, so I have just gone through and selected a few of the more interesting tickets.

I hope you enjoy reading about my misfortune, unless you're from Zion, in which case I hope you get decapitated by a robotic lobster.