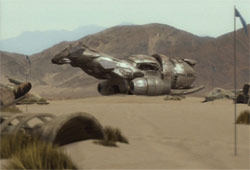 She's old and ugly, but on the other side of the coin she's slow as a puddin' foot.Somehow this old cow poke figured out how to get this junk heap up and underway. Cap'n Reynolds may not cotton to the way I talk freely and such, but ain't no complaints coming from him on the topic of engines.

Over canned beans in the galley the crew talked about where we was going. Sounds to me like we are picking up a shipment of magical little girls on Maidenhead III, one of the core worlds, to take them to some such and such space station out near gorram undiscovered space. I hear for to tell that some of them little girls is karate experts, others can read minds, some of them hunt reavers and space vampires and what have you, and all manner of other such beyond my ken.

Our siao lan pilot is always on the outs with the split tail, but listenin' to their arguments it's apparent to every man but them that they're eager to grapple. Ain't no concern of mine, got no worries 'cept to keep this piece of history space worthy. 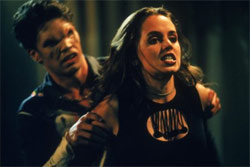 Watch out for that reaver, little magical girl!Well, I reckon I might as well write this down on account of the long haul we're in for headin' out to the peripheries and boundaries and what have you of known space. Turns out our esteemed Cap'n Mal Reynolds got himself a moral streak despite all the swaggerin'. He seems them girls from Maidenhead III and figures out they ain't on no fun field trip. They got hoods and shackles and Blue Sun wants him to sign all kinds of papers afore he takes 'em.

So instead of takin' a juicy load of magical girls worth a gorram fortune, he refuses the contract and signs on to haul oats out to some do-nothing colony called Rustwater Creek. 600 tons of oats is a fair bit of oats, but ain't no money in oats.

I expect to be paid this month in canned beans and stern looks from the Cap'n. 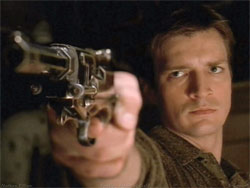 That's the serious face he makes when he's givin' out some justice.Y'all is in for a surprise: Rustwater Creek, population 86, don't have no money to pay us for the oats. Some robber baron or some such took all their money and their cattle and horses and whatnot are starving because they built their colony on a planet with just about no grass. Way to be, plow chasers. How about next time you go to a planet with no grass you bring a truck instead of a horse?

So everybody here is real unhappy and Cap'n Reynolds is contemplatin' do some damn fool thing like just up and giving them the oats and then going after the robber baron.

Mighty noble of him and all, what with the good and the evil and the stands against authority, but this crewman ain't lookin' forward to gettin' a free round of bad beer at the bar in town as payment for riskin' his hide fightin' some rich sumbitch with a private army. My suggestion during palaver, which was duly ignored seeing as how Cap'n Reynolds and his pu bor bin got all moralizing on me, was to sell the gorram oats to the gorram robber baron.

Instead he wants to fly to the robber baron's ranch and scare all his horses, get shot at by a bunch of meatheads, and then swoop in and teach him some sort of lesson or something. I'll let you know how that goes.

We done shot up the robber baron's posse and blew up his ranch by having me overload the engines. Course once we left atmo the damn boilers blew so now I got me a whole mess of work, third-degree burns on my arm, and ain't no money coming for our big oat delivery. Cap'n Reynolds got the townspeople to give us a bunch of pairs of boots to trade on Mill Holler, a nearby planet. I just gotta get these engines workin' again.

Far as I can tell, if Mill Holler got paved roads I intend on stayin' put right there. I'd rather be saluting some boner wearin' kitchen gloves or work for some chao ah beng than any more of this bull pucky. 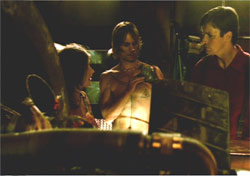 Have fun with that thing, you gorram clod head.Once we got to Mill Holler, Cap'n Reynolds sold the boots and my cut is a whoppin' 50 credits. Just enough to put my bones up in a real bed for a few days and get some real food - and by that I mean whiskey - in my guts. I ain't given the man no letter of resignation, I'll let him figure out the job situation by his lonesome. In fact, I put some clod head from the bar onto the idea of workin' as his engineer, some core world runaway name of Bester. Seems like he got more rock salt than sense in his head, so he should be a good fit for Serenity and her crew. May they have all sorta great adventures together.

Me, if I never see another corroded fuel coupling or another spinny thing that I don't even know the word for sticking out of an engine, well, that would be the arrangement I'm seekin' out. No more horses or oats, no more whiny colonists, thank you very much. If worse comes to pass, I'll sign back up for the Alliance. I'm sure they always need somebody what'll stand and salute when someone walks by to clean under the sink.