Humans have always shared a close relationship with the animal kingdom. In fact, some scientists even speculate that animals evolved from tiny human beings. While we may never know where exactly animals came from, we do know that many of them are friendly and willing to work for us in exchange for room and board.

In general, we all tend to treat animals with respect. They provide us with meat, synthesize milk for us, and even ferry us to and fro. Unfortunately, there are some corporations out there that love to exploit our animal friends. One of these corporations is the giant, life-devouring entity known as the Bradford Exchange.

In the interest of protecting our animal friends, I want to expose some of the Bradford Exchange's most egregious abuses. I warn you: what you are about to see is incredibly disturbing. 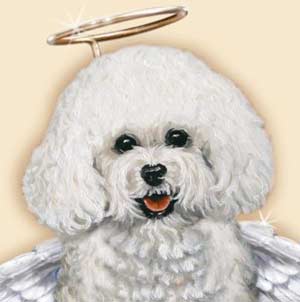 Since it's pretty much my duty to write about dogs each and every week, I felt morally obligated to include this thing. The Bichon Frise is easily one of the most horrendous looking strains of canine in existence. What's most disgusting is that buried inside this abomination is some lingering trace of wolf DNA. Think about it: over time, humans successfully transformed the majestic and deadly wolf into a yapping pile of cotton. If that isn't a grand testament to the evils of man, I don't know what is.

Naturally, the Bradford Exchange has capitalized on this great wrong, turning the godforsaken Bichon Frise into a tasteless ornament to affix to your Thomas Kinkade pop-up Christmas tree. The only saving grace of this ornament is that it depicts a dead Bichon Frise. That's at least somewhat merciful.

There is a glaring hypocrisy at play here: if they made little ornaments depicting dead retarded children people would be outraged. Yet somehow the dead canine equivalent of a dead retarded child gets a free pass. What kind of world are we living in? 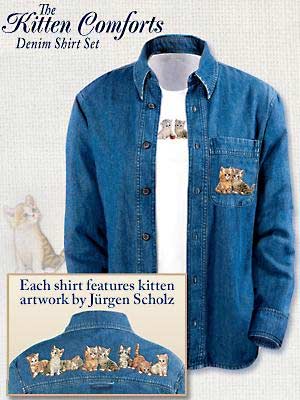 The only thing Americans love more than denim shirts is adorable kittens. This revolutionary product combines these two great loves in a way that is both natural and satisfying, like a well-executed sex party.

Normally a shirt like this would cost you upwards of seventy-thousand dollars, but you can get the complete two-piece set for a mere $79.95. I'm saddened that the genius scientists working in the Bradford Exchange underground laboratory failed to implement a critical feature: realistic purring. We've had the technology to make cell phones vibrate, so why can't we make this shirt vibrate to simulate the feline's proprietary purring function? It almost seems like a no-brainer.

Oh, and if you're brave enough to wear something like this, you'll probably want to snag the corresponding sneaker set. In concert with the sneakers, this jacket can help suffocate whatever shred of dignity and credibility you have left. 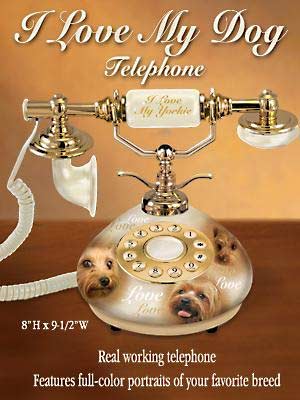 I Love My Dog Telephone

Expressing your love to a dog can be a difficult act. Sure you could pet the dog, feed it, or take it for a walk. Maybe you could buy it a squeaky toy or give it a delicious biscuit. Too bad all of those things are trite and downright insulting. Your dog is smart and knows when you're being condescending.

The ideal way to express your love to a dog is to purchase a telephone decorated with attractive images of its breed. When the dog sees this stunning antique-style phone, its tail will start wagging like a windshield wiper in a downpour. Congratulations! You made a long distance call to its heart.

Sadly, in another tragic design blunder, this phone does not produce barking sounds when it rings. 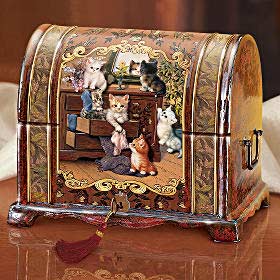 It's probably impossible to accurately tally all the hours mankind spends searching for the perfect kitten-encrusted music box. The kitten music box is practically the foundation of Maslow's Hierarchy of Needs. It's the gaping hole philosophers and theologians alike have tried and failed to fill.

Our seemingly interminable longing may finally be at end. The Bradford Exchange has created an elegant music box with "European appeal" that showcases a small consortium of kittens engaged in some old-fashioned mischief. Best of all, once you breach the seal and open this sacred box, you're rewarded with a priceless treasure: the melody of "Don't Worry, Be Happy." Suddenly, I'm no longer worried. I'm happy!