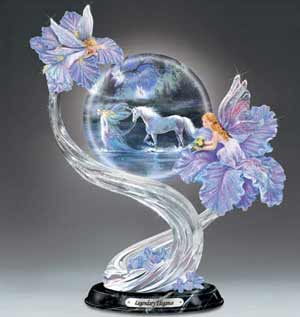 Every day average people like you and me walk to our mailboxes or pick up newspapers only to discover that, hidden deep within, is a big wad of advertisements for dreadful mail order products such as porcelain baby angels or calendars with inspirational quotes and pictures of drooling dogs. More shocking than those simple items are the gloriously overdramatic light-up paintings and sculptures put out by companies like the Bradford Exchange. In many cases, these products make the word ridiculous seem like an understatement, but nonetheless they exist in abundance and apparently actually appeal to some people. I do not know who these people are, but I can only speculate that they are the deranged elderly, for nowhere other than Grandma's house would you ever expect to see a giant eagle statue coming out of the walls with wolves painted on the interior of its magnificent all-American wings.

The Bradford Exchange is a company manufacturing collectibles that take patriotic clichés to the most horrifying of conclusions: a hellish Dante-esque nightmare realm of eagles gnawing at your eyes and American flags coiling around your soul, raping and pillaging all that you are in a cataclysmic miasma of suffering. Every product they make is a hyperbolic enema of patriotism and Americana gone wrong. In the hands of the Bradford Exchange, the American spirit becomes a chainsaw-wielding killer rampaging across the landscape spreading terror in the form of the most repulsive art ever conceived by mortal men. And they make good money doing it.

This week I would like to stop with all the drinking and the lies and the cheap scenes for a few brief moments and offer some of my thoughts on a few pieces of Bradford Exchange memorabilia that strike me as being especially exceptional. 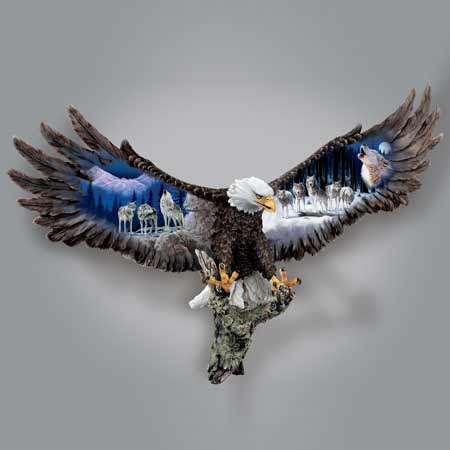 Wolves & Eagle: Bros Before Hos
In this glorious sculpture entitled "Sovereign Spirits," we see the triumphant Eagle, a beloved symbol of America, spreading its mighty wings. But what's this? Inside those wings rests a beautiful painting of wolves, a beloved symbol of capitalism and distant non-evolutionary cousin to the eagle! This one sculpture alone is so powerfully stupid that it is like a black hole sucking the entire concept of art into an all-consuming singularity, where it ceases to be. Gazing at this is to gaze at the end of human creativity, watching it die every second your eyes give it sanctuary. 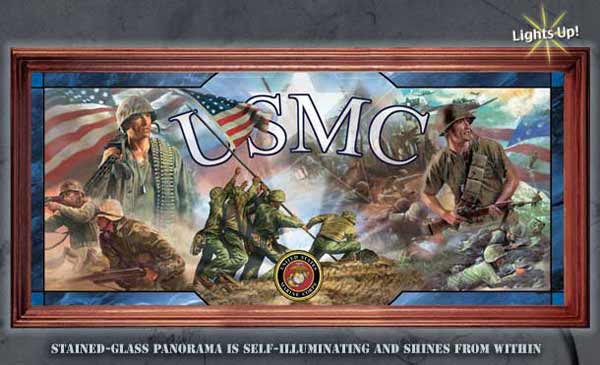 USMC: More Gay Than Jim Nabors
This picture, which takes the hard work and sacrifice of the United States Marine Corps and turns it into the artistic equivalent of a man giving a horse a blowjob, costs a mere $135. It is a profound shame that the brave Americans and Japanese that fought and died at Iwo Jima could not have known beforehand that the most enduring moment to come from that terrible event would be immortalized in a $135 light-up painting. I have no doubt that such knowledge of the future would have comforted them, for in many ways this painting is a tribute far greater than any afterlife. Like the resolve of the thousands of men that died that day and in other great battles, this manly painting lights up from within. It's only a shame it does not play a continuous sound loop of some Jap bastard screaming as he's gutted by a machine gun. 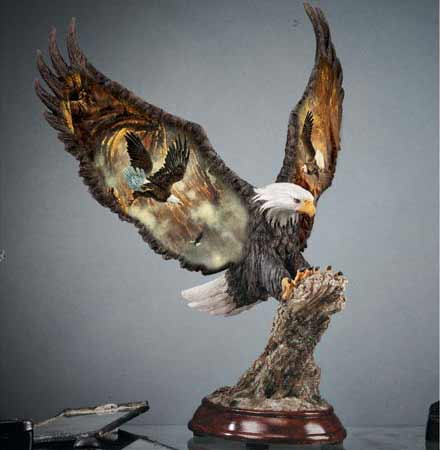 American Redundancy
The Bradford Exchange has done something mystical here, creating a recursive eagle statue. Like the wonderful "Sovereign Sprits," this statue is a moving two-for-one special, giving you not just a lovely three-dimensional eagle, but also paintings of eagles. If they could somehow add a third layer of eagles to this, it would be a work of staggering genius. But as is, with only two layers of eagles, it strikes me as being awfully plebeian and uninspired. It's like the artist sculpted this eagle, then thought, "holy crap, I should paint something on the wings." Then, after brainstorming for days, he couldn't think of anything and just started painting more eagles on the wings. Great job, ace! 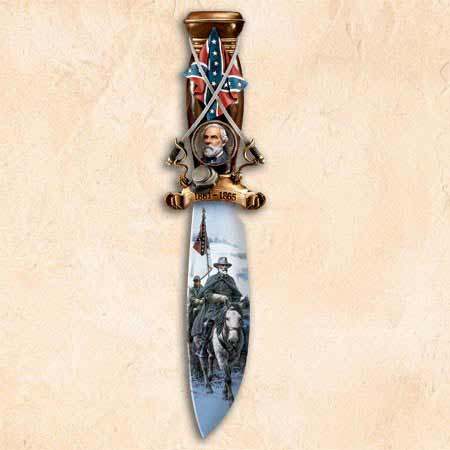 General Lee's Sword of Omens
In honor of the Confederate States of America, America's forgotten retarded brother, the Bradford Exchange has created this glorious replica of General Robert E. Lee's actual knife, which he used in his fight with President Abraham Lincoln atop Mt. Rushmore. Though Lee eventually died in the battle, his knife was smuggled back to the South where the priests of the Confederate Temples held it in high esteem. Now, more than a century after the Civil War, you too can own a piece of history with this legendary weapon that will imbue any trailer or mobile home with extraordinary character and charm. As a bonus, it wards off black people, making it a valuable home safety device.

And those, my friends, are but a cruel taste of what the Bradford Exchange offers. They seem to do quite well for themselves as far as coming up with new ideas goes, but just in case they are scratching their heads for inspiration I'd like to offer up a few suggestions. Richard "Lowtax" Kyanka also had a few ideas of his own, which I have included here as well. Bradford Exchange, I am hereby releasing the following items to you to do with as you please! 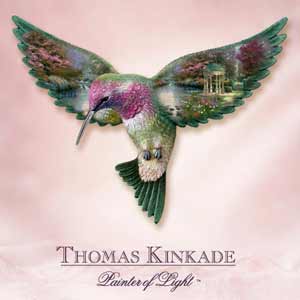 A cuckoo clock in the shape of a burning building, with firefighters popping out every hour. Also instead of a cuckoo noise there is a fire engine sound.

A figurine of Jesus baptizing a unicorn (Elvis is painted on the side of the unicorn).

A stirring rendition of General Patton riding on the back of an American eagle, with scenes of dogs or cats (you pick the breed) painted on the interior of the wings.

A statue of dolphins swimming along the side of a rainbow, except the dolphins are all designed with their stomachs exposed and inside each stomach is a miniature light-up American fetus.

A statue of the World Trade Centers and the reflection on all the windows are of eagles and Jesus (thanks Lowtax).

A beautiful glass Native American headdress, with images of brave Indians fighting off smallpox painted on each feather. The smallpox could probably be substituted with dragons or alcohol if the end result looks too depressing.

An eagle with a painting of a Ford truck on one wing and on the other there's a Chevy (thanks Lowtax).

A light-up painting of Dale Earnhardt's racecar with a picture on the hood depicting Jesus with an American eagle resting on his shoulder and a six-pack of PBR in hand.

A light-up painting of Thomas Kinkade spread out nude atop his millions of dollars. You could hire Mexicans to randomly add a few brush strokes to each one that comes off the assembly line so that you can call them all original works.

A beautiful porcelain sculpture of Abraham Lincoln, the Great Emancipator, delivering the Star Child that saved the world from the alien invaders in the TV series "V."

A statue of Mt. Rushmore with the addition of a two-headed Ronald Reagan, one head white, one Native American with ceremonial headdress.

An urn decorated with the majestic paintings of Thomas Kinkade.

An eagle clock which screams "AMERICA!!!!" at noon and midnight and road flares shoot out everywhere and it dials 911 (thanks Lowtax).

An entire M1A2 Abrams tank hand painted with scenes of other Abrams tanks ascending to heaven on golden stairs.

A katana painted with scenes of the Rape of Nanking and a bald eagle on the hilt crying.

To see even more, be sure to stop by today's Awful Link and explore the wealth of terrifying paintings, jewelry, and statues that will help you get in touch with the dark side of the American spirit festering within.

For further reading on this update as well as a bit of chatter with Tom "Moof" Davies, please refer to my Daily Dirt entry.