For one or two hours each week, I find respite from the usual barrage of disgusting musical failures by listening to bands I actually like. I relax and unwind with some Windir or Xasthur, then, refreshed and joyous, I return to my shackled chair into a dark closet stocked with Hot Topic's entire CD inventory. At this point, some people might think "oh, I infer from this introduction that he's taking a break from the shitpile to review Mastodon, a group that a metalhead such as himself must personally recommend." Goddammit, I am so fucking sick of that assumption.

As a large bearded misanthrope, I treasure the "personal-space bubble" my haggard appearance affords. Lately, though, total strangers of comparable girth and unkemptness have started approaching me, giving me a knowing nod and saying "dude, Mastodon." Some of them wink. I'm terrified that one of these hirsute zealots will initiate a secret Mastodon "handshake" that culminates with the Velcro-like meshing of facial scruff. I've come to embrace being mistaken for a beggar -- free change is free change -- but I can't bear the presumption of Mastodon fandom.

So now I'm shaving. I watch my stubble, coiled in the sink like the tear-matted eyelashes of a thousand massacred angels, spell out "Avenge Me!" before disappearing down the drain. You'll pay for this, Mastodon. 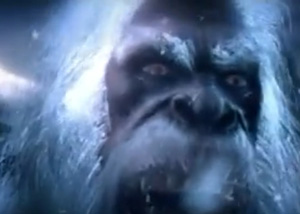 Some dude from Mastodon.This dramatic sacrifice only addressed part of the problem, because it's not just random freaks who confuse me for the kind of idiot who would appreciate Crack The Skye, a glorified bar-band record with Grateful-Dead-meets-Tool cover art. Casual acquaintances make this misstep: "So, I hear you like metal. You've gotta be loving that new Mastodon, huh?" No, I don't, and fuck you for asking. Mastodon plays metal for people who don't really like metal, and prog for people who don't really like prog. Crack The Skye is like a vegetarian hot dog: An inferior substitute for something the target audience, as well as a good percentage of the general public, finds repulsive in its original form.

Metal fares best when it's fast or extremely slow, but Mastodon chugs along at a middling tempo. This is because Mastodon actually plays "hard rock," as self-described on the Crack The Skye cover sticker. "Hard rock" encompasses Aerosmith and Zeppelin, as well as Buckcherry and Disturbed. It's the broadest catch basin for musical sewage, with the possible exception of "emo." Mastodon boasts more squandered instrumental talent than its peers, but it carries too much baggage to graduate to a real genre. Any group that ever plays a passage of what could accurately be described as "boogie grunge" should permanently remain on the hard-rock shortbus. 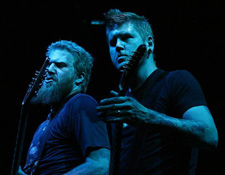 "Globally revered hard-rock masters."Crack The Skye remains listenable until the 59-second mark of opening track "Oblivion," when Brent Hinds first unleashes his obnoxious, hickish screech. Metal vocalists should sound like exotic creatures, such as snakes, or lions, or opera singers, or Norwegians. Hinds sounds like a needy trailer-park invalid. His delivery can be supernaturally whiny, like Ozzy Osbourne's voice becoming sentient and decrying the decrepit shell that houses it, or like Layne Stayley's ghost wailing in dismay upon realizing mortal needles pass right through his ethereal arm. The throatily drawled "Oblivion" chorus recalls Stone Temple Pilots and Alice in Chains, paying homage to pioneers in the field of "shitty hard-rock bands who convinced morons that they were something cooler."

Hinds uses an especially pathetic tone when he pleads "don't stay, run away" during "The Czar," but heed the simpering bumpkin's words: That song drones on uselessly for 11 minutes. The theoretical problem with "multi-part suites" such as "The Czar" is that if, say, "Part IV: Spiral" were superior to the rest of the composition, people would have to fast-forward within a single track to get to the good part. Fortunately, this annoyance never surfaces, because the sort of groups that write "multi-part suites" are mentally incapable of including any salvageable material.

Thematically, Crack The Skye concerns a paraplegic astral-traveling to Tsarist Russia. This plot falls into one of the acceptable categories for metal concept albums, which are as follows:

This quality premise and lyrics such as "the demon skin is covered in fine mist" are really the only justifications for the album's existence, even though they're filtered through Hinds' flat, syrupy croon. Mastodon's words are inconsistent, as evidenced by some Twilight-caliber talk of "lost love" and "stars falling." But the dumber the lines, the sooner they'll be perceived as deeply meaningful and tattooed across some morbidly obese girl's breastplate.

When they realize they've failed at establishing Mastodon as a legitimate metal juggernaut, the band's increasingly desperate fans start pulling the "it's awesome that they don't take themselves seriously" card, an all-purpose defense for any form of artistic incompetence. They cite the Aqua Teen Hunger Force movie-opening skit Mastodon performed, and the stupid video for "Divinations," with its lightning-shock guitar and caveman antics.

But metal is pretty much only entertaining when it takes itself seriously, for the same reason terrible action movies are more entertaining than self-conscious spoofs, and a crazy costumed guy who wanders the streets believing himself to be a wizard is more rewarding than a comic actor hired to play the part. Mastodon is a joke of a band, a disgrace to metal and beards. When the Great Reaper swings his scythe, these hard-rock fucks will not be spared.