Brothers! Here we are on the cusp of war, a mere hundred dwarves standing between our homelands and the invading horde. Our weapons are dull, our hands untrained in combat. We have not had a decent nap in weeks. Our ale stores have diminished, leading many to suckle their beards for sustenance. Some have even resorted to water and vegetables.

And yet, we do not waver. We do not back down from the costly call of destiny. Why? 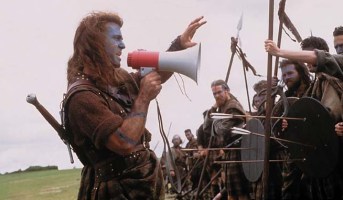 I look out over this parapet and see four thousand barbarians from the realm of men. They stalk back and forth as bloodlust consumes them. They possess incredible speed, unmatched skill, and greatswords carved from Godwood itself.

We, however, have pride. I am truly proud of you guys. Really. Borgrir, remember when you drew that mermaid? That was a great drawing. Good stuff. I'm proud of you.

Beyond the barbarians I see the clattering, restless forms of the Skeleton Lords. Their crowns are pieced together from the teeth of their victims. Each holds the femur of a legendary warrior, torn from the victim's body as it still bled out, dipped in molten gold and fashioned into a grim scepter. Some say the Skeleton Lords are unstoppable. After all, how can you kill an enemy that cannot bleed, a foe which magically pieces itself back together when you smash it apart?

I'll tell you how: With decency. We are all good, well-meaning folk, and that's something that the Skeleton Lords can't say. Let's see them defeat that!

Look out onto that field once more, and you shall also see the great crystal form of a high dragon. Note how the sunlight glints across his ruby eyes like a flash of steel reflected in a pool of blood. Some say he is as old as the world itself, possibly as old as the stars.

You know what's also old? More than half of our troops. Most of us are greybeards with so many years behind us that we can barely lift our chipped axes. That might not be as old as the dragon, but I certainly think it's impressive!

There, to the left flank, stands nearly twenty thousand crabman wizards, foul creatures whose inability to use eating utensils is only surpassed by their ability to conjure up crustacean magics. What could possibly be more mysterious than the ways of a crabman wizard?

The answer is simple: A dwarf's inability to move quickly. Well, that and the fact that our wounds bleed so profusely. It's a toss-up, really, but either way we have the crabmen beat.

What's that I see, cresting the horizon? Is it a fleet of wolfman pirate ships charging across the sea to siege our unguarded bay? I believe so! Their magnificent vessels and cannons appear to be brand new.

Also alarmingly young, however, are those few dwarves among us who are not ancient and feeble. I believe that many of you are scarcely fourteen years of age. Again, not as new as the gear belonging to the wolfmen, but quite impressive! 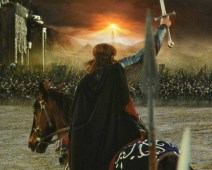 Ah, yes. As expected, the sky is darkening with the silhouettes of clockwork griffins. Those flying contraptions are built to tear and rend with metallic claws and beaks. Singular in purpose, they are frightening marvels of engineering.

If you ask me, however, I think that Chuffwold's tummy scratcher was the most clever contraption I had ever seen. So, on that point the advantage goes to us.

There, off to one side, the rest of the horde has given wide berth to two small shapes. Those would be the twin necromancers from Sylfallen. Those evil siblings are able to raise the dead to do their bidding. When the battle begins, they will breathe cruel life back into our fallen opponents and friends then turn them against us.

We, on the other hand, are courteous enough to leave the dead alone. I'm going to call that one a moral victory.

That forest to the east? Those are actually the united nations of Treemen. Sure, they're large and powerful, but isn't freedom more powerful? No? Oh.

There, directing his army's movements from the back of the battlefield, squats the incorporeal form of the Bugbear God. They say he's omniscient, that he can see all. Intimidating, right? Well, consider the fact that from where I'm standing I can see all three hundred thousand of his troops as they advance on our position. His omniscience no longer seems to be such an advantage, does it?

As you can see, my brothers, the very best qualities displayed by our enemies are equaled or bettered by the very traits which make us dwarves. Fight bravely, and let our actions today forge a new tomorrow! Borgrir, put down that drawing for one blasted moment, will you? If we lose, it's because you weren't listening to me!