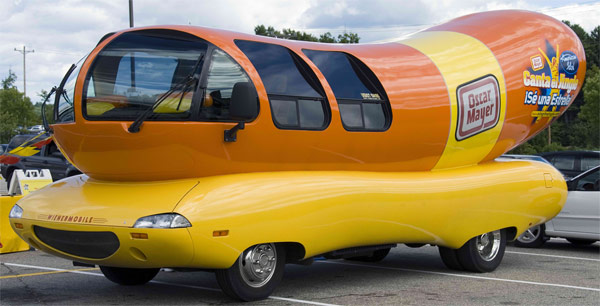 Wesley Snipes once sternly advised America to, "Always bet on black. And when you win you don't have to pay taxes on that money, because it counts as a prize and not income." In the midst of a prolonged economic downturn I think a safer bet is on hotdogs. 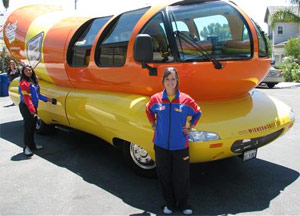 Why not? Hotdogs are inexpensive, they're full of calories, they travel well and, most importantly, the hotdog economy is always booming. You can also trust them. If I could have any hotdog-related job, other than professional hotdog eater, I would want to be deployed as one of Oscar Mayer's Wienermobile drivers. The few, the proud, the Hotdoggers.

As sure as the sight of an MPF Pursuit Special strikes fear into the hearts of road warriors, the sight of a Wienermobile patrolling America's highways strikes hunger into the hearts of children. And also probably road warriors. We mentally identify decades by the fleets of cars that filled our streets. What is cool now will become lame and then cool all over again. The Wienermobile remains unchanged. It will always be cool. It's why I've applied, like I do every single year, to join the legendary ranks of Hotdoggers.

I think if I became a Wienermobile driver the first thing I would do would be drive it through a car wash. In addition to being a great visual metaphor for placing a penis inside a washing machine, the sight of a Wienermobile driving into a car wash also serves as a reminder of the excellent hygiene of Oscar Mayer hotdogs.

Every time I stopped the Wienermobile at a stoplight I would rev the engine and try to get the car next to me to drag race. I don't think the Wienermobile is very fast. Somewhere between a wheelbarrow and a regular car, if I had to guess. That's okay; nobody would expect me to win, so the one time I did win people would be pretty excited. I would also try drifting in a Wienermobile even though I don't really understand how to do it and I think it would be dangerous.

I worry about never having the opportunity to drive a Wienermobile. Not very many people out of everyone in the world gets to do it. Few get the calling and fewer still survive training. Way less than 1%. Are there more Navy SEALs than Wienermobile drivers? Probably. I wonder what Wienermobile Hell Week is like. 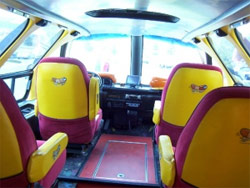 My backup plan, in case Oscar Mayer overlooks me again this year for Hotdogger Academy, is to buy an old Wienermobile. This is difficult, because very few Wienermobiles have been retired to the private sector. My hope is that a drug lord bought one and then lost his assets in a police raid and so I could buy the Wienermobile at a police auction. I bet I could get a pretty good deal. I don't think too many people know the real value of a Wienermobile.

I would be afraid of claiming to be an Oscar Mayer Wienermobile so I would invent my own kind of hotdog and call the vehicle a Hotdogmobile. I would be available for people to have events where they wanted a giant hotdog car around, like a cookout or I could take some kids to prom. I could park it at kids soccer games and give them free hotdogs at halftime. There's a lot of energy in those dogs.

If a city wanted to hire me I could also be an emergency Hotdogmobile. It could be 811 and when they call I can come to an emergency where someone needs hotdogs or is having a problem with some hotdogs. Maybe I could open a package for them or steam up some dogs for a lunatic breaking into their house.

Here's to hoping I am hired for the position. Oh, and sorry, Wesley Snipes, I believe I will be placing all of my bets on hotdogs.