One time a guy with this sticker cut me off, so I angrily jotted down the phone number. Only when I read it back did I realize that it wasn't a number at all, but a suggestion that I eat shit! To prolong my humiliation - it was the only emotion I'd felt in a long time - I actually called 1-800-EAT SHIT. Amazingly, it's a real number that plays recorded fart sounds.

This sticker usually coexists with a bunch of Morrissey and Depeche Mode stickers on the cars of wiccan girls I'd like to coexist in bed with. Unfortunately, they never respond to my myspace messages. Their inability to grasp the suffering of my tortured soul makes me feel like a bumper covered with stickers that no one can read. 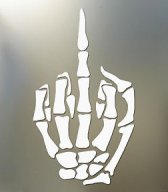 I have an intense fear of dying in a car crash. Whenever I get in my car and do a mirror check, I see the following:

Driver's Side Mirror: Me getting thrown through the windshield in slow motion, while I sing a sensitive alt-rock ballad in normal time.

Rear View Mirror: A flock of mourners gathered around my coffin as it's being lowered into the ground. A man pushes through the crowd and throws himself onto the casket, pounding on the lid and sobbing. Everyone wants to pull him off, but it's one of those awkward funerals where nobody knows each other, so they just stand there and let him get buried alive.

Passenger Side Mirror: A skeleton hand flipping me off, reminding me of the cruel indifference of the universe. Of the three images, this one terrifies me the most, so you can imagine my shock when I found out it's also a popular bumper sticker. To avoid seeing this ghastly omen while commuting, I have to pay someone with a blank bumper to drive in front of me at all times.

I've found that if I study the faces of other drivers in the rear-view mirror long enough, I begin to see them as human beings, not just rivals for the freeway, gas pump or drive-thru pharmacy where I get my neck ointment. However, I've also found that if I keep looking at them my empathy slowly fades, until I'm back in my normal, emotionless state. This odyssey through the unknown realm of caring reminds me of Joseph Campbell's model for the Hero's Journey. So I can relate to anything that says "hero" on it. 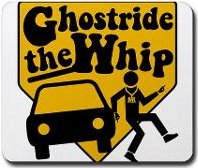 When I'm driving, I often worry about how my car looks through the Sartre-esque Gaze of the driver behind me. One time I got so worried that I turned on cruise control and climbed out the window to inspect my ride's appearance. This inadvertently began the fad called ghostriding, which has gone on to claim several lives. Now whenever I drive I'm literally ghostriding with the vengeful spirits of the people I've killed. I try to exorcise them by playing Gregorian chants on my stereo, but they just laugh at my puny 8-inch subwoofer, which doesn't do the bass voices justice.