Old Jebediah the farmer tended to his rainbow farm for some seventy years, starting from his earliest childhood days and continuing roughly to the present. In the early days the farm belonged to Jeb's father, who had carried the courageous scrap of land through its most successful years. As was the way of things, Jeb took over the farm at the ripe age of ten years, upon his poor father's flu-induced death. Jeb's mother had died giving birth to him, and he had no other family in the world. It was not easy for a ten year old to run a rainbow farm, and so Young Jeb had to drop out of school and give all his heart and mind to his land and his beautiful crops, which arced through the sky with colorful grace and butterfly splendor.

Old Jeb was most often a grump, scarcely able to control his temper and prone to fits of powerful exclamations and fist shaking. For most of Jeb's life, his temper was kept cool by the mere presence of his darling wife, Phyllis, whom Jeb always referred to as "Ma." Ma was splendid at keeping grumpy Old Jeb from killing the mean old banker, which he often threatened to do when the bills arrived promptly each month and signaled the couple's continued nightmarish descent into the oblivion of debt.

"Jeb," she would say, "we'll make it through to see another day."

Ma and Jeb's love began long ago, too. When Jeb was a mere eleven years of age, running the farm proved quite the daily tussle. Particularly when overfeeding resulted in one of his rainbows growing too big. The colorful colossus wobbled crazily in the sky, and caused quite a commotion when one end uprooted itself. The mighty bow of colors snapped like a catapult, whipping the earth hard, thundering mightily! Jeb ran along the limp, outstretched rainbow and found that it had destroyed his neighbor's barn.

Like all eleven-year-old kids, Jeb was responsible to a fault. He spent the entire summer of his eleventh year rebuilding that barn for his neighbor, Old Mr. Riley. Old Mr. Riley was so impressed that he encouraged Jeb to start courting his daughter, beautiful Phyllis Riley. The next thing you know Old Jeb was engaged to Phyllis and the two were married at the ripe old age of twelve.

Sad times fell upon poor Jeb, as he soon learned that his wife was barren and that her womb was a furnace where dreams were turned to ash. Without any children to inherit the farm, Old Jeb was filled with tremendous sadness, and often toiled angrily in the shadow of mighty rainbows. He spent hours cursing and shaking his fist at the hideous God that plagued him with such bitter fruits. Still, even without child, Ma and Jeb grew happily old together, tending the farm along the way. Jeb worked hard and delivered harvest after harvest. There were colorful rainbows of all shapes and sizes all throughout the county, but the prettiest grew out of Old Jeb's farm.

Last month Jeb returned to the house after a long day sewing the seeds of a new patch of rainbows to discover yet more tragedy. His darling Ma had collapsed in the kitchen and expired under the heat of the hot oven where she labored to prepare Jeb a feast as a sign of her undying love for him. The feast remained, though her life did not. Jeb's heart snapped, like the mighty rainbow that brought them together once snapped. 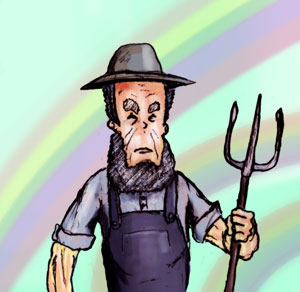 Jeb sighed at this latest curse and began preparing a coffin and grave fit for the person who loved him longest. He gathered some lumber and a large stone and then set out to give Ma a final resting home. Soon afterwards she was buried on a beautiful hill near the house, and a rainbow arced over her grave. It was a pretty rainbow, but it was hard for Jeb to see. A black rainbow of debt loomed over the entire farm, and Ma's passing made its shadow all the bigger and blacker. What's more, Ma was now buried on the farm, making it impossible for Jeb to sell the land without someone digging her up. Jeb decided to try alternative methods for delivering the surefire harvest needed to escape the debts. He would turn to science to save his crops.

Last week the mean old banker came again. The banker was a lecherous man, dressed in a black suit and with a face scarred by a dainty moustache. He was prone to stopping by quite often, but never stayed long and was always polite. Although Jeb was a grump, Ma kept him in check, and treated the banker like a king. He always left with a smile and took great pity on the couple, letting them slip by on the promise of a bountiful harvest to come. Ma was dead now. Jeb would have to survive the banker on his own wits.

"You can go now, Mr. Banker," said Jeb. "My crop is fine and the money will come through. We'll be square come harvest."

"Without that money, Jeb, your farm is dead," said the mean old banker. "And I decide if the money comes through or not, not you."

"The crops are fine," Jeb exclaimed, shaking his fist madly in the air.

"But Jeb, old boy, I can see out the window and what you say is not true. Those crops are blurring and leaning, too."

The mean old banker was right, for just outside the window was the shameful sight of rainbows unfit for harvest. They cast an eerie light on the farm that made it seem sick and decrepit. It was a million miles from the old days, once beautiful and beaming with life and color.

"Now just a second here, those rainbows are perfectly fine!"

"What about the two laying out in the pasture over there?" inquired the banker.

"Those two had to be put down. It was the damn E. coli. But the rest are fine."

"And those there? The colors are running and they look garish."

"It's the window. It's smudged and dirty. I don't have Ma – bless her soul – to clean them like in the old days."

"I see, Jeb. How about the rest over there? They look positively nightmarish."

"I need to deliver, so I used some of that rainbow growth hormone. It adds color, but they bands tend to buckle under the added weight. That's why they droop. They're still mighty fine rainbows."

"You used far too much, Old Jeb. You ruined an otherwise fine crop."

"I'll beg you pardon! This crop is fine, and come harvest you won't be welcome on my property ever again. We'll be square!"

"I think you need to face the music, Old Jeb. You have no one to will the farm to, and you are already sizeable in debts. This crop is hopeless, and it's time for you to stop.

"The subsidies, they'll kick right in!"

"Government subsidies for rainbows are at an all time low, Jeb. You're going to have to sell your farm to pay these debts. We own half of it already anyway. That's what all the other rainbow farmers in the county did. Subdivisions are springing up everywhere as a result. Colorful houses of all shapes and sizes all throughout the county, Jeb."

"OVER MY WIFE'S DEAD BODY!" Jeb shouted, ushering the mean old banker to the door and slamming it behind him. If not for the arthritis to retard movement, Old Jeb's fist would have vibrated clean off his arm.

The mean old banker went back to the bank and signed some papers signaling Old Jeb's fate, then put them in a box at the end of the day. When morning came, the box was emptied, and the papers entered into a machine, and the machine talked to another machine, then that machine had a conversation with yet another machine. Soon the machines were all in agreement. Old Jeb had to go.

The bank seized the rainbow farm, and Old Jeb was told to go. But he refused and fought to the bitter end, shaking his fist and exclaiming his right to stay with passion and anger. The mean old banker argued right back, and soon the county sheriff was in on the act. Everyone agreed that Old Jeb had to go.

Old Jeb would not listen, and argued with all his might. But his anger was too strong, and his heart not up to the fight. His face went white and stiff, then his fist stopped suddenly. Soon he was flat on his back. The rainbows loomed high above and they were wretched and stupid, wobbling through the air with colors all smeared. They were drooping and dripping and some were splayed out dead. Jeb's last sight was not of his own death, but the death of his family farm. It was a gruesome sight he had not allowed himself to truly see until the last of his heart was all gone. All the pretty rainbows were dead and buried, just like Ma.

There were sirens too, with flashing lights that splashed colors all around the farm. Old Jeb didn't see those though, for he was already asleep. Old Jeb was dead and the ambulance took him away to the hospital where men signed some more papers signaling his fate. They took his body and burnt it to ash inside a big furnace. 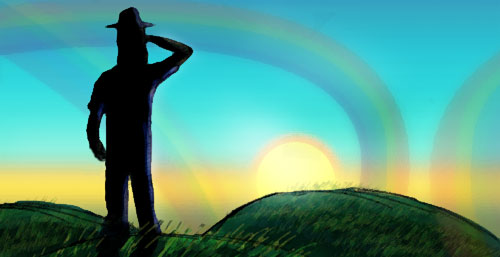 There is a Daily Dirt article here behind this link located directly to the left of the last ten words.