It has recently come to my attention that I selflessly give and give and give, yet hardly ever get anything in return. The following entities owe me, and owe me big: 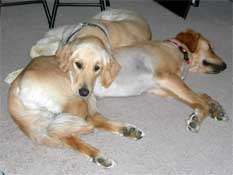 What the hell are you two doing and how does it earn me any COLD HARD CASH?

My Dogs - Okay you two retarded hairy monsters, it's time to pay up, because I'm sick as hell of taking care of your dumb asses and getting nothing in return. Let's see here, I've raised you guys from puppies, which according to my calculations occurred roughly 95 years ago, and in that time I've cleaned up countless vile piles of goo that have flowed from your various orifices like a hyperactive volcano of congealed gravy. I never grew angry when you insisted on chowing down chunks of rancid sausage squeezed from your sibling's puckered anus, then deciding to engage in the time-honored tradition of reheating those wads of waste in your stomach and forcefully ejecting the remains all over my kitchen floor in a mucilaginous, vile mess. I've been pretty damn patient with you two, and it's time to pay up.

WHAT I WANT FROM YOU: First off, I'm gonna have to demand you guys stop barking at ghosts of deceased alien Vietnamese soldiers haunting the backyard. Honestly, I've got no earthly idea what the hell you're barking at, why you're barking at it, or what causes you to randomly decide, "hey, we've spent more than enough time barking at absolutely nothing! It's time to stop and roll around in our filth now." So I'd just absolutely love it if you two would shut up for five consecutive minutes, and that includes the nonstop gagging noises you make, perhaps because your brain was incorrectly wired directly into your small intestines.

And speaking of keeping your mouths shut, I'd like to request an end to the waterfall of rancid filth that escapes from your diseased throats every time something vaguely upsets your stomaches. Here's an idea, you idiot animals: if you don't want to throw up, STOP EATING HORRIBLE THINGS WHICH WERE NEVER MEANT TO BE EATEN. This includes your sibling's poop, pieces of wood, rocks, dead grass, tiny birds who died from tiny bird leprosy, and large chunks of each other's skull.

Additionally, I'm requesting you develop some awesome extra-sensory abilities like all the Golden Retrievers possess in every Dean Koontz novel. I think that author suffers from a "really smart dog" fetish or something, because it's growing increasingly impossible to pick up a Koontz book that doesn't at least casually mention the amazing contributions to the survival of the human race that psychic Golden Retrievers offer. In a world where ordinary pets can repel Satanic killers and otherworldly invasions, my two goldens can barely walk forward without farting and falling into a piece of furniture.

So maybe you two dogs could develop some sort of psychic power that lets you see the future and predict when you're going to puke or emit a stream of viscous death upon the carpet, and when that time comes a-rollin' around, you could attempt to adjust your orifices in such a way that the arc of innards angles into the toilet or a trash can or the backyard. Hell, I'm not picky at this point; I'd be pleased if you could manage to aim it directly into each other's mouths, thereby cutting out the middle man. 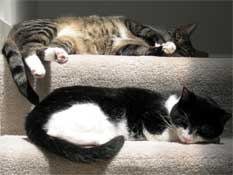 GET TO WORK YOU USELESS CRETINS!

My Cats - As far as the animal hierarchy is concerned, cats rank on the "useless" scale below "grey ceramic duck statues" and slightly above "leeches that attach themselves to your testicles." I adopted two cats, "Cat" and "Kit" from local animal shelters over the years, and I have yet to experience them giving anything back to either me or the Kyanka household in general. I pet you two, brush you two, clean up the hairballs you've shrewdly elected to vomit onto random locations about the house like a minefield of barf, and constantly provide you with a steady stream of food and water so you may fill up your litter pan with compressed nuggets of stench. How the hell am I getting anything out of this relationship? What are you two doing for me here?

WHAT I WANT FROM YOU: I want you to start acting rationally and using that icky grey matter between your ears. I'm sick to death of you meowing nonstop for hours to go outside until I eventually succumb and open the front door, at which point you walk onto the porch and meow nonstop for hours to come back inside. Why the hell did you want to go out in the first place? Did somebody phone in a bomb threat? If so, why didn't you tell us about it? We know you're able to communicate; you prove that each and every day you decide it's time for you to eat and mistakenly believe this desire should be communicated to me via the time-honored tradition of "constantly emitting a series of horrible and weird noises shrill enough to shatter glass."

I'm also going to kindly request you stop murdering woodland creatures and depositing them in the garage, bent into comical poses that insinuate the animal died while lightheartedly juggling its own intestines. Yes, both my wife and I know you're painfully proud of your ability to rob life from innocent creatures, but we don't appreciate the stench of week-old death obscured somewhere behind a series of heavy boxes in the garage, particularly when the toxic cloud of decay grows so obscenely ripe that it begins disintegrating our home's structural foundation. Maybe you could drag your bloody carcasses out to the backyard so the dogs can ingest them with a sizable amount of mud and poop, thus completing their doggy buffet. 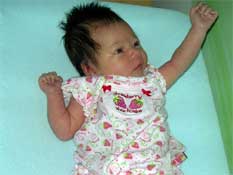 Stop acting like a baby and make daddy some megabucks!

My One-Month Old Daughter - The first thing anybody blurts out the second you announce your wife's pregnancy consists of, "boy, you know, your life will change forever!" Well duh, of course my life's gonna change forever, tell me something not painfully obvious to anybody with an IQ eclipsing a vegetable strainer. You inherently understand your life will change forever once you realize your wife will be squeezing a living, breathing human being from her crotch, which, even now, represents such a bizarre concept to me that I refuse to believe it actually occurred. Sure it demeans the grueling pain my wife experienced during the delivery, but - come on - the baby comes out of her vagina! That can't be right; that's where I put my penis to create it, for crying out loud!

What your friends and doctors don't tell you, the big secret everybody tries to keep under wraps, is that babies are essentially worthless and incapable of accomplishing even the most basic of tasks. Our one-month old daughter Lauren has yet to earn back any of the cold hard cash we've invested into her "Living With Lauren" fund, most of which goes towards products directly applied to her rear end. Sure she's excelled in the fields of diaper-soiling, crying nonstop, and flailing her arms furiously like an angry bloated tick, but has she landed a paying job? Has she helped clean up the house? Has she accomplished even the most basic household task? Nope.

WHAT I WANT FROM YOU: It's time you started working for what your mother and I provide you. The days of leeching from our generosity, our free diapers and babysitting services and all-you-can-drink milk from a boob... they're all over. If you want something, you're going to work for it. Now many of you may be wondering what kind of position a baby could possibly fill, especially now since Mexicans are refusing to take jobs that not even blacks would accept. Well there's good news: the potential for baby labor has never been stronger! In fact, many industry analysts believe awarding jobs to American babies could possibly remedy the outsourcing issue affecting so many workers these days. Why just look at this long and extensive list of jobs for babies!

* Large, crying doorstop
* Unhappy living statue
* Filler for an eight-pound sack (NOTE: BABY MUST WEIGH EIGHT POUNDS)
* Burglar detection system that cries when a burglar either is or isn't nearby
* Breast-milk checking device
* Really useless and nonfunctional computer made out of human flesh and poop

Granted, I haven't exactly noticed an overwhelming demand for any of these positions in the local newspaper, but since I haven't bothered reading the local newspaper in over a decade, I suspect my research may be fundamentally flawed. I stopped reading The Kansas City Star once I realized half of the inflammatory opinion columns on any given day revolved around street lamps. 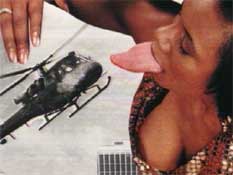 What the hell is this

My Lawn - I am required to maintain a lush green lawn in order to fit in to my high class middle-class neighborhood full of snooty people with filthy retarded children. The homeowners association practically forces me to pay guys in overalls like $50 a month to spray deadly chemicals on my lawn and make sure it doesn't spontaneously catch fire and explode when I look at it because I'm such a terrible gardener that I can't even successfully grow tired at night. I have to water the stupid grass every day, yank weeds from it, and mow the entire deal about once a week, and what do I get in return? More grass, more weeds, and more bills. It's about as useful as paying a fat man to step on your skull after you insulted his wife and tried to run from a guy at a bar because he looked like he was on crystal meth.

WHAT I WANT FROM YOU: Remember the scene from that movie "Minority Report," where Tom Cruise falls into some old woman's garden and the plants suddenly grow sentient to attack him? Well I want my lawn to track down and murder everybody responsible for that movie. There might be some issues killing Tom Cruise with my landscaping because Scientology probably has at least three books dedicated to defending yourself from alien lawn attacks.

The Red Cross - Way back when I was trying to woo my wife, I pretended to care about donating blood and doing good things for other people because that's how you trick people into falling in love with you. Even though I absolutely hate needles - and I realize that's an utterly ridiculous thing to say, because who honestly loves needles besides junkies? - I still agreed to donate blood because I suspected it would deceive my wife into accidentally thinking I wasn't a jerk. The move paid off in that sense, but in another aspect, it completely screwed me. The Red Cross has been calling my house every day since then, asking me to give them more blood. Sometimes they call two or three times in an hour. I've begged to be removed from their calling list, but apparently blood is thicker than callers.

WHAT I WANT FROM YOU: I just want you to leave me the hell alone. Please, for the love of god, stop demanding my blood. That's the job of all the furries, Juggalos, and Scientologists.

Pay up and pay up now, suckers.