The Chinese are on the right track 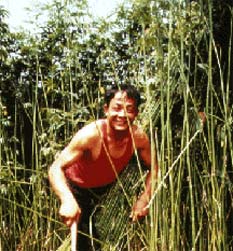 Former Falun Gong member Chang Xao enjoys a life free of troubles after leaving the Falun Gong. Also a life free of toenails, fingernails, and parts of his frontal lobe all removed by JUSTICE!Since America declared war on terrorism, a number of countries have been using the label "terrorists" for various peaceful anti-government groups within their borders. By labeling them terrorists they are able to get away with things that they normally would have to hide from the international community; like beatings, torture, and prisoner deaths. China is particularly guilty of this and in the months following the WTC attacks, has escalated attempts to shut down the operation of the Falun Gong spiritual movement. While the Falun Gong are openly opposed to China's communist regime, they are not violent and do not conduct terrorist attacks, they peacefully protest and are hauled off to jail for it.

Recently China's state-run news agencies have been attempting to lessen the international outcry over the arrest and beatings of Falun Gong members by going into propaganda overdrive in a curiously Chinese fashion. Recently the Xinhua News Agency reported in a completely unbiased article entitled "Justice to Defeat Evil", that the Chinese government is reaching out to members of Falun Gong and reforming them into rational and productive members of society and exciting and fun "Reeducation Centers". You can read the whole journalistic masterpiece here.

"The reeducation center is more comfortable than my home and I am gaining weight here," said Teng, smiling shyly. The beaming Teng, who has received systematic training in Chinese herbal medicine, cannot be compared with the Falun Gong devotee she once was.

Teng came to China from the United States many times between February and May of last year to collect information on the Chinese government's handling of Falun Gong issues for Beijing branches of foreign news agencies and introduced Falun Gong followers to foreign reporters.

Well that sounds like a grand old time! I bet it is a regular barrel of laughs out there at the "Reeducation Center". Hey wait, what's this?!

"I am pleased to shake off the spiritual shackle of the Falun Gong cult and return to a normal life."

Teng Chunyan is now an active member of the re-education center dancing troupe and is busy preparing for an upcoming art performance organized by the center.

"I have not been abused since my detention and have not seen any sign of beating or admonishment here. Police in the center are very polite and kind," said Teng.

Well that seals it! The Chinese government is the nicest government ever! Look at what they've done for poor misguided Teng Chunyan; she's so happy she's dancing. In fact, their war on terrorism is so gentle compared to our approach I think we need to take after them. We can start by capturing the leaders of the Taliban and the al Qaeda network and then we just stick them in special centers where they can be taught that their version of Allah is wrong and a cult and that the so-called "Great Satan" is actually a love bear sent from the planet Hugsonia. Why stop there, reeducation centers are the wave of the future! 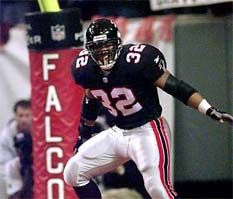 Falcons Running Back Jamal Anderson is in charge of the Motivational Dance Troupe.The Bengals are obviously not going to win the Super Bowl ever, so why do they even have fans? Cult indoctrination, that's why. The Atlanta Falcons Reeducation Camp, located in historic Savannah, Georgia, will deprogram cultists and indoctrinate them in the happy life of being a fan of the Atlanta Falcons. It starts with a little tough love in the form of Falcons quarterback Chris Chandler throwing football-shaped blocks of solid steel to break the arms and legs of cultists. Once they are immobilized, Falcons Cornerback Ray Buchanan will then read a series of poems he has written about what America and Football mean to him.

America, resplendent eagle,
In your amber waves of grain,
Does stimulate my love for thee,
Fills my heart with your refrain,
Atlanta Falcons Football program,
Your gridiron heat is hot,
Some other teams try to beat us,
But I would think they will not.

After the poetry program, which will last for 30 days while team dieticians stuff linebacker sized meals down the gullets of the former cultists, they will be ready for arts and crafts. Three-hundred pound Defensive Tackle Shane Dronett will teach the soon-to-be-former cultists that there is a place for them in the productive utopian society of the Atlanta Falcons. Each will be allowed to explore their own creative abilities, while Dronett encourages them on projects like "Giant Foam Hats", "applying an iron on decal of the number one to a t-shirt", "painting your fat ass in Falcons colors", and of course "picking fist fights with a father and two children who are at a game to see the Pittsburgh Steelers". Within two months these "lost souls" will be on the path to turning their lives around. 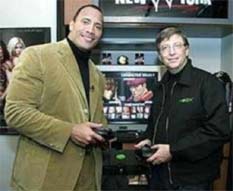 The Xbox is powered by a Penitum III, a GeForce3, and the majesty of The Lord Our God.Why fight it? You know deep down inside that the only console worth owning is the Xbox from the Microsoft Corporation. In an effort to reach out to misguided owners of other consoles, Microsoft will be offering free enrollment at its Reeducation Facility in Redmond. This twelve-day seminar is not nearly as intensive as the one offered by the Atlanta Falcons, but it has proved highly effective in coaxing Nintendo, Sony, and Sega cultists out of their wayward lifestyle. The process will begin with a videotaped lecture featuring Bill Gates and WWF Wrestler The Rock explaining why your soul is forfeit if you choose to purchase consoles from rival manufacturers. The Rock will demonstrate how only the Xbox is imbued with the life-changing power of Christ by bending a pipe and raising an eyebrow provocatively.

"Do you smell what Bill Gates and The Rock are cooking?"

Why yes we do The Rock, you're cooking a better tomorrow for us all. After the introductory video ends, gamers will be segregated based on their previous console to prevent any brawls from breaking out. They will be shipped in rail cars to a secret underground facility somewhere just south of the Canadian border. There they will spend the next 11 days playing games like "Halo" and "DOA3", lulled to sleep by the soothing voice of Gates reading bedtime stories over an intercom system installed in their cells. On the final day they will be given a rebate for 10 dollars off the purchase of an Xbox and be sent home, convinced that a hardware error screen is really a sign of quality.

This rendition of L. Ron Hubbard was done by SA reader Billy Harris and it shows that even an invertebrate can unlock the raw potential found in Dianetics!I can't think of a single person I know who isn't clamoring to become a member of the COMPLETELY SANE "religion" of Scientology. It's like that scene in "Dawn of the Dead" where they are moving all the trucks in front of the doors of the mall to keep the zombies from getting inside. Well those zombies are the people programmed by other religions and ideologies that are absolutely wrong and the trucks are completely overflowing with the life-changing power of "Dianetics". So the giant spirit ghost thing of L. Ron Hubbard says come on down to the Sea Org Floating Funhouse, located in international waters where laws for chemical interrogation and pyramid fun schemes do not apply.

"It totally changed my outlook on everything," said Jena McPierson, the briny sea wind stinging her cheeks, "I used to be well off and a hard worker. Then I gave all my money to the hive mind to achieve OTMCMXXXXX and spent five-hundred consecutive 16 hour days working the counter intelligence game for The Flag in the Volcano Operation. My codename was Laserblast, and I also taught the "sway back and forth chanting lines from Battlefield Earth" dance class. My life is so fulfilling. Would you like to join Scientology? We have free pizza back at the Sea Org Floating Funhouse, it has been fully scanned by our Emeters and I promise you it contains no pizza Thetans. We are carefree, come on, really you'll like it. Come on. Come on, I insist. Free pizza, come on. Come on. Come on. The true light is in the twinkling eyes of L. Ron Hubbard!"

Jena continued to pester reporters until they disappeared with her into the Sea Org Floating Funhouse and immediately sent out a message demanding that we not print this article or quote anything they said. While I love Scientology and would like to respect this demand, we had already gone to press and once you print stuff on the Internet you just can't change it. Sorry Scientology!

The best thing about all these new reeducation centers cropping up is that you can just drift from one to the next, being constantly deprogrammed and indoctrinated. I think I'm going to try to see if I can last through ten of them before my brain melts out of my nose.