Let Us Give Thanks! 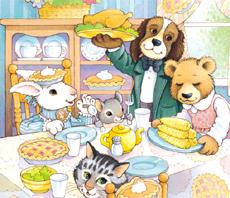 Furries and other woodland creatures celebrate Thanksgiving by killing their most annoying relatives and serving them up on a golden platter. Note that the dog is banging a bear chick, resulting in hot inter-species hardcore action.

Hundreds of years ago, Pilgrims sailed to America - the "New World" - to escape religious prosecution and begin life anew. They were befriended and assisted by friendly Native Americans, who taught these funny hat wearing newbies how to grow corn, beans, squash, and liquor. And one fine fall day they celebrated this friendship with a day of celebration. A great feast was held. The Pilgrims dined on heaps of freshly killed turkey, mashed potatoes, yams, radishes, apple pie, and a multitude of other treats on sturdy, rugged tables built especially for the occasion. The Indians sat in the mud and ate corn bread, scraps, and leftovers. All the children were sent off to eat at the "kiddy table," where they mercilessly mocked and tortured each other with dull knifes and even sharper spoons.

A few early PETA charter members were there too, protesting the killing of hundreds of innocent turkeys and vainly trying to convince the Pilgrims that their moss-and-dirt turkey substitute tasted just as good as real turkey. After the meal, the PETA protesters were declared witches and burned at the stake for the enjoyment and amusement of all. The Pilgrim stand-up comedian remarked, “Yonder witches doth protest thee killing of feathered bird. Now we hast evened thy score by dispatching of said witches along with thee bird friends! Avast me matey, yarr!”

This day of celebration became a yearly tradition, celebrated by all colonists. They eventually officially dubbed it "Thanksgiving," and decreed it an official holiday in which no mail could be delivered.

The day after the very first Thanksgiving, an important Pilgrim elected official named James Coopwell awoke from a long slumber to discover a young Indian couple sleeping under a tree near the outskirts of the settlement. Apparently they had been so exhausted by the events of the previous day that they just didn't have the energy to make the long trek back to their village. Coopwell grabbed a huge battle-axe he bartered from an Indian Chief for a single bead and a broken belt buckle, ran outside, and plunged the axe viciously into the neck of the sleeping husband, killing him instantly. His squaw awoke with a start, screaming in her native tongue and dripping with her lover's blood. She tried to run away, but Coopwell managed to run her into a bear trap. 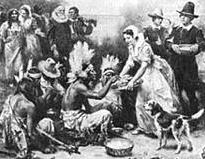 Pilgrims line up to dump leftovers on mud-covered Indians. After this picture was drawn, the dog ran off to engage in a kinky tryst behind a tree with his (bear) girlfriend. Historians believe that this resulted in hot inter-species hardcore action.

After violently raping the scared young girl, Coopwell led an elite team of Pilgrim black-ops into the Indian village. They stole everything of value they could find, including items the Pilgrims had previously traded to the Native Americans (hence the term "Indian Giver"). After some more rape and murder they returned to the Pilgrim settlement laden with treasure. Later, they wrapped their ill-gotten gains in brown paper and gave them away as Christmas presents. When their wives asked how they were able to afford such extravagant gifts, the Pilgrim men laughed and explained they had been "on sale."

Thus, the day after Thanksgiving shopping holiday was born.

So while you wrap up those $39 George Foreman grills and $14.99 "Tomb Raider" DVD's you bought in a crowded retail store Friday, be sure to take a moment to thank our founding fathers for having the good sense to bilk the Native Americans and take over their land, eventually forcing them to build great casinos on tiny reservations to survive.

Entertainment Weekly, an old-fashioned printed material publication devoted solely to criticizing celebrity hairstyles and rating movies on a grading scale that was originally designed for ranking 19th century schoolchildren, is hosting an Internet write-in poll for Entertainer of the Year. Apparently they don't remember that whole "Hank the Angry, Drunken Dwarf" fiasco. 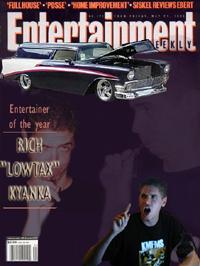 Lowtax may not be a Hollywood pretty boy like Steve Buscemi, but he deserves to grace magazine covers too! Thanks Open Season for the pic.

Anyways, the Something Awful forum goons - led by GreatLemur - have started a campaign to elect SA founder and frequent supermarket shopping maven Richard "Lowtax" Kyanka as EW's Entertainer of the Year. And to this I say: "sure, why not! I've got nothing better to do!" He's already in first place and leading by 200,000 votes, but I suppose he could use more.

But let's analyze Entertainment Weekly's Entertainer of the Year page a little more closely, shall we?

As the holiday season rolls around, EW's editors are busy weighing our choices for Entertainer of the Year. We don't ask the age old question ''Who's been naughty and who's been nice?'' We just want to know which star has shone the brightest.

The only thing EW's editors are "busy weighing" is their fat, bloated asses after gorging on endangered species during one of the many Hollywood Thanksgiving orgy-parties held around this time of year. And as far as star power goes, it just doesn't get much brighter than Rich "Lowtax" Kyanka! He's an Internet celebrity who lives in a filthy, cheap apartment with a cat who secretly hates him, but doesn't openly display these feelings out of acute mortal fear! For those of you that don't know, "Internet celebrities" are just like regular celebrities except they aren't famous or attractive. And instead of earning money to "entertain," they lose money thanks to bandwidth and hosting costs. You know, like reverse Christmas. Otherwise, they're the exactly same as regular celebrities, pretty much.

Julia Roberts had a stellar year, but then again so did Gwyneth Paltrow and Nicole Kidman. And Britney. And the boys of 'N Sync. And Madonna had a mad tour.

Julia Roberts had a stellar year doing what? Throwing shoes at Brad Pitt in "The Mexican"? Cheating on that guy from "Law & Order?" Flashing her nine extra teeth at cameras? And Nicole Kidman? Yeah, way to get divorced! Nothing says "entertainment" like marital strife, I guess! Britney Spears has had to resort to nearly stripping on stage and "singing" about being a sex slave in a vain attempt to win back the crucial "perverted old man" demographic, now that she's pushing 20 and no longer jailbait. "And Madonna had a mad tour?" Way to try to be hip, EW! Yeah, that tour was mad phat props word up tight, yeah baby, yeah! Radical and far out, nifty-keen like whatever omigod! 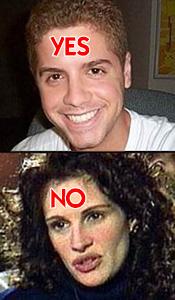 It's quite simple, really: Lowtax = YES. Julia Roberts = NO. Please consult the diagram above for further information.

And don't forget newcomer Alicia Keys. Mel Brooks and his ''Producers'' crew made Broadway a hot ticket… George Lucas teased us with ''Episode II'' trailers. And we simply can't ignore the year's two biggest movie ''stars,'' Shrek and Harry Potter. Or can we?

I'd attempt to make some witty remark about Alica Keys, except that I don't know who the hell she is. Another one of those "I'm pretty and I also sing songs and here I am looking pretty on the cover to an album of songs to prove it" girls, I guess? Mel Brooks merely grabbed a movie he did while he was still funny and slapped it onto the stage. George Lucas spent most of his time thinking about how great he was, copping feels off Natalie Portman, yelling at his special effects people, and trying to figure out how to digitally add a hot and heavy Luke Leia Jabba The Hutt three-way to the original trilogy. And yes, we can forget Shrek and Harry Potter. If we really try.

A vote for Lowtax is a vote for… well… either Lowtax or George Bush, since EW's voting system appears to have been designed by the same people who did Florida's. And of course EW may very well just ignore the true results of their poll and say Leelee Sobieski or George Clooney or whoever they hell the Editor-in-Chief is most attracted to this week won and the rest of the votes didn't count because Lowtax doesn't have a publicist. But if you wanna vote anyway, head on over to:

And vote for: Rich "Lowtax" Kyanka

If Lowtax wins, he'll probably say something to the effect of, "oooooooh ooooooh ooooh look at me, I'm the ghost with the most!" Then he'll get drunk on White Russians, overdose on Ambien, and chase invisible blankets around the room until he finally passes out. So what are you waiting for, you gotta vote now! Or not! I really don't care, personally; I think the guy is kind of a jerk.