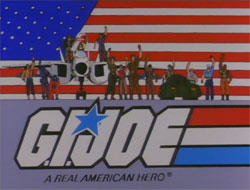 On Friday I gave the world the first half of Cobra's plan to seize Alaska using a legal loophole in the Seward Treaty. According to the treaty, the man who holds the "Great Seal of Alaska" is the sole owner of the state. Under the guidance of Tomax and Xamot, Cobra produced a Russian immigrant named Gregori Potemkin with a fraudulent Great Seal and installed him as the puppet ruler of Alaska. GI Joe set out on the trail of the missing 19th century Russian steamer Romanov in the hopes of locating the genuine Great Seal of Alaska and reclaiming the state.

When we last saw GI Joe their transport plane had crash-landed in the Alaskan wilderness and they had proceeded overland in Snowcat half-tracks in search of the Great Seal. Soviet Red October forces, also trying to find the Great Seal, intercepted the Joes in a mountain pass and triggered an avalanche that destroyed the Joe's vehicles and killed an unknown number of Joe greenshirts.

Meanwhile, the Baroness was dispatched to lead a Cobra search party looking for the Great Seal of Alaska, bringing the total number of parties wandering around up to three. We resume the action where it left off, with the surviving Joe forces completing their march through one of Alaska's infamous volcanic wastelands. 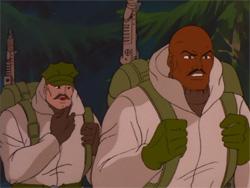 Gung-Ho vents to Roadblock about Red October.The Joes are exhausted from their march through the perilous fire-baked plains of Alaska and they opt for shelter in a frozen pine forest. Fortunately, they had the wherewithal to salvage their giant cold-weather tents from their Snowcats so they don't have to sleep outside amid the din of constantly-howling wolves. Morning brings another march and an opportunity for Gung-Ho to swear revenge on the forces of Red October. "I'll make them wish Carl Marx was Groucho's brother," he promises.

Gung-Ho has scarcely finished obeying the forms of Kanley when the Joes happen up the Red October camp. You might wonder how the Joes, on foot, managed to catch up with a force flying in helicopters. Keep wondering. Things are very quiet down there, but Scarlett and Duke spy an opportunity to make off with a Soviet helicopter.

Now would probably be as good a time as any to mention that the number of greenshirt survivors with the Joes plummets from one scene to the next. Their attrition suggests that between the time they were on the volcanic plain and the time they reached the Red October camp around a dozen enlisted men died. Did Roadblock decide to have a barbecue or did all of the greenshirts simply succumb to their injuries and the environment? With Gung-Ho and Roadblock's famous appetites a Donner Party turn among the Joes seems entirely plausible. 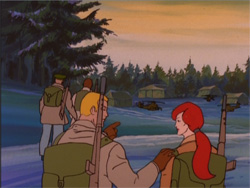 "Baby, that's where we're gonna take failure to a whole new level!"Whatever the cause of the disappearing greenshirts, the Joe party has been pared down to the four main players. It is conveniently small enough to fit into one of the Soviet helicopters and Scarlett is confident she can fly one.

When the Joes don't see any movement in the camp they decide to take a closer look. Empty helicopters and dozens of crates populate the campsite, but there are no people. Food is half-eaten on tables and a record player is still turning in one of the tents. The Joes wonder what has happened to their rivals in the October Guard. Could the stacks and stacks of crates have fallen on top of all of them? Gung-Ho suspects a trap, but there are too many weapons lying around to convince Scarlett.

An ominous rumble precedes the arrival of the trap. No, it's not a Cobra drilling machine; it's a Cossack cavalry charge. With sabers flashing, the warriors of antiquity descend upon the camp, slicing through Roadblock's rifle and encircling the four Joes before they can escape.

"In name of Tsar, his great Excellency Alexander Second," grumbles the Cossack leader, "You are prisoners."

Well, that was unexpected! 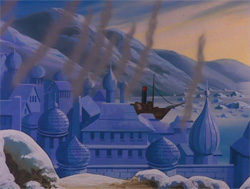 The Russian lost city, with smoke emerging from...well, emerging.The Cossacks lead the Joe contingent, suddenly enormous, on a forced march through the frozen wasteland of Alaska. As the bound Joes struggle to keep pace with the horsemen they are regaled with sinister Cossack songs. Scarlett wonders aloud what 19th century Cossacks are doing traipsing around late 20th century Alaska. Maybe a better subject for contemplation would be how a force of Cossacks wielding sabers overwhelmed an apparently numerically superior GI Joe force armed with modern laser rifles.

There is no time for Scarlett to contemplate Joe ineptitude as they soon arrive at a blue Russian city. The whole city is literally blue-gray and smoke rises from the many invisible chimneys. Behind the blue walls and the blue onion bulb ziggurats a steam ship is visible in the harbor. The Cossacks have brought the Joes to the exact implausible city of ridiculousness that they were seeking!

"Looks like the Romanov found a safe harbor in 1867," notes Scarlett.

"And these people must be the descendants of the original crew," observes Duke.