There's a media mob forming up. The dumpy peasants are braying for justice from the comments section of every mommy blog and newspaper. The object of their outrage: popular Northwestern University professor J. Michael Bailey or, as you might know him, Professor Fucksaw. 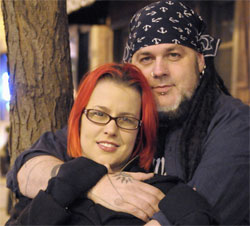 The product is called the Fucksaw and it was being wielded by Jim Marcus (who one or two may know as the singer for industrial band Die Warzau) on his wife Faith Kroll in front of about 100 of Bailey's students. Bailey described the act lasting "about three minutes, but it felt a lot longer." Who knew watching a guy who looks like he's held together by tobacco stains and tattoos stab his wife's stench trench with a motorized dong would feel like an eternity?

The school initially defended Bailey for his demonstration, but with the growing pressure and each passing day the university's statements have become increasingly mealy-mouthed. On March 3rd they announced that they would be investigating Bailey. Investigate what? There are 100 witnesses who sat through a woman getting a Black and Decker jammed in her cooter for a class about sex. Case closed. I'm sure the syllabus for the class includes watching videos of acts much "worse" than a man sawzalling his wife's crotch.

"A man from the government is going to come in to talk about condoms, I will answer your questions about STDs, and then we're going to watch a video where a guy that looks like Patton Oswalt in a diving suit sits in a wading pool and asks a prostitute to puke out waffles and sausages onto his genitals." 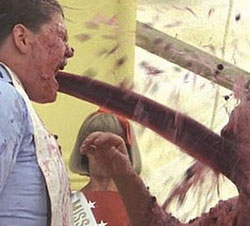 The difference is that one sex act is a recording produced in the basement of a dystopian blockhouse in the middle of Siberia and the Fucksaw is a live act performed by a married couple. None of the students who volunteered for the event are complaining, but parents of other students disapprove.

Should a college professor teaching a class to adults about other adults fucking each other be forced to ask parents of students not even in his class whether or not something is okay? My guess is the same dipshits that are mad about this would find about 90% of the material in the class objectionable. That's certainly the case with the braying morality legion being summoned by the heavy coverage the story has received. They want Bailey fired. No, that's not accurate, most of them probably want Northwestern University to be napalmed.

Professor Bailey should be free to invite two lesbians thrown out of a K.D. Lang concert for being too gross to come to one of his events and spend an hour giving each other pap smears. If a bunch of adults want to sign up for a class about sex then they, and their parents, should expect anything within legal boundaries to be acceptable. It's college, after all.