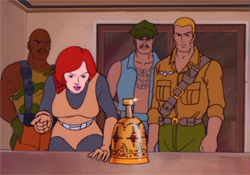 Here's your stupid cup, now give us our state back!Georgi Potemkin, used car salesman and erstwhile ruler of Georgiland, is shocked to find four GI Joe members in his office holding the Great Seal of Alaska. Scarlett chides him that his game is over and Alaska has been returned to the United States. Potemkin turns to his conspirators, Tomax and Xamot, only to find the Crimson Twins packing up their briefcases and leaving the office. They won't listen to his pleas for them to fight the Joes in court.

Potemkin is then bum-rushed by a group of buyers demanding he hand over the Alaskan goods they purchased. The Joes laugh at the spectacle, completely apathetic to the dozens of deaths caused by Potemkin's ridiculous stunt.

The Great Alaskan Land Grab marks yet another defeat for Cobra and another victory for GI Joe. Let's have a look at how the numbers stack up before we discuss the lessons to be learned from this operation.

The Great Alaskan Land Grab might be the nadir of Cobra planning, at least when it comes to feasibility. A rational thinker would have assumed that Cobra's hijacking of the Seward Treaty and their fake Great Seal of Alaska scam would be treated, at best, as a joke, and most likely as an act of war. The United States should have mobilized forces already present in Alaska to overwhelm the relatively small Cobra force. There should have been no scavenger hunt and Cobra's scheme definitely should not have been embraced as a legitimate legal challenge to Alaskan ownership.

The fact that both the United States and the Soviet Union reacted the same way to Cobra's actions is a reminder of the bad behavior exhibited by both nations during the Cold War. The Cobra threat was largely sidelined as two superpowers attempted to outmaneuver each other. 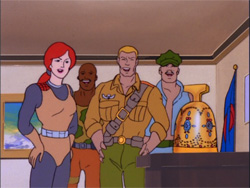 May the laughter of incompetent wrecks haunt your dreams, Cobra.The losses suffered by all sides in the conflict were mostly avoidable, but none can be considered more shameful than Cobra's loss (in two engagements) of aircraft to small-arms fire. When downing an unarmed transport plane Cobra lost two Rattlers to rifle fire from the Joes aboard the plane. Later, when given the seemingly simple task of sinking an unarmed wooden steam ship, Cobra managed to lose a third aircraft to small-arms fire.

The lesson to be learned for Cobra is to employ some sort of rudimentary tactical training for their personnel. Men flying multimillion dollar attack jets that can't evade rifle fire should be flying a desk at a snake-shaped fortress and trying to evade eating the last donut. Cobra also needs to improve their selection process when recruiting infantry. During hand-to-hand fighting that was virtually even the Cobra troopers did not manage to best a single opponent in fisticuffs.

What Cobra needs more than anything is a reformer. They need someone who can join the organization and offer a new outlook and a new critical analysis of Cobra forces. Possibly someone made from the DNA of villains throughout history.