Many of you might know that I am a collector of rare and antique books, mostly from the 18th and 19th centuries. I have written of this passion at great length in previous articles. What you may not know is that my favorite area of collecting is the realm of antique erotica. Nothing quite takes my breath away like a rambling French poem about eating custard from between a woman's toes or a Japanese watercolor illuminating the way breasts might fall from a torso if chopped off with the sword of a samurai.

Contrary to popular belief, the erotica of our past is often every bit as lively and graphic as the erotica you might find on the Internet today. I would challenge any of you to use the Internet to find a match for my Belgian Zoetrope that depicts a mustachioed strongman inserting a bee into his anus. Yet, my one and true treasure of my collection, my well-thumbed and heavily-stained pièce de résistance, is a seemingly modest digest from 1801 entitled "Collected Fine Erotica of the American Colonies". The digest was released quarterly from 1795 to 1804 in England and her colonies and contains condensed versions of the most ribald erotic fiction of the day. 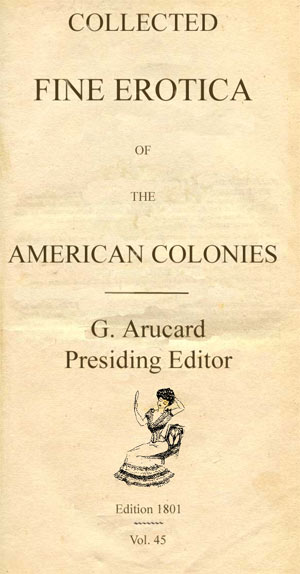 I would like to share this with you in some small way. I cannot reproduce the entire book, out of respect for its majesty, and even the individual tales are too involved to include. I have decided to include excerpts of three of the most elegant and timeless tales of erotica from the book. You may experience difficulty understanding the characters of these stories and their motivations because of the cruel gulf of time separating our reality from theirs. Remember that despite the ornate language and style of prose these men and women had desires and needs just as we.

From Chapter 2 - The Arrival

The smiling Captain shrugged the scarlet sash from his broad shoulders and, his passion inflamed, he took her hands in his and brought them to his face. With a roguish sparkle in his eyes he kissed her hands and then let them fall back to her sides.

"Mister Adama," Madam President Roslin cooled her humours with a posied parlor fan, "you forget yourself."

"Madam," Captain Lee Adama stepped closer, "I forget nothing but the unspeakable need I feel."

"Oh my," Madam President Roslin was suddenly overtaken with the most powerful emotion and nearly lost her footing.

She reached out with her hands as her senses abandoned her and Captain Lee Adama seized this opportunity to grip her by her dress cape and bodice. He pulled her towards him, pressing against her crinoline and inhaling the intoxicating scent of her feminine vapors.

"Though most inappropriate," Madam President Roslin blinked coquettishly, "I find your advances irresistible."

Needing no further invitation to action, Captain Lee Adama tore her dress cape from her shoulders and roughly pushed aside her over-bonnet to reveal her rose-colored demure cap. He brushed the cap from her head and the pair moaned in unison.

He tore her shawl from her grasp, flinging it over a nearby chair, and with a bestial grunt he cleared her desk with one arm. He lifted her onto the desk and knelt betwixt her legs. Slowly and teasingly he began to unlace her boots, first one eyelet, then another, and another. She placed her hands on his shoulders and moaned with ecstasy.

Her boots thus removed, Captain Lee Adama stood again and began unfastening the bodice of her dress. His fingers trembled slightly with anticipation. After some minutes of frenzied passion the bodice of the dress fell away and he was able, with great dexterity, to unfasten the locks that held her outer-hoop in place. Madam President Roslin cooed with pleasure as his hot fingers found her decorative petticoat. Unable to stand it any longer, she tore at her outer-corset worn over her under-petticoat.

"Milady," Captain Adama said his breath coming in ragged gusts, "I fear that I cannot restrain myself much longer."

"You can do it," Madam President Roslin breathed, "you are almost there."

Captain Adama nodded and at last removed her decorative petticoat, setting at once upon the laces of her corset cover. These he disarmed quickly, gaining him access to her under-petticoat and its small brass clasps. With a groan of pleasure he snapped the last of these open and, with her help, was able to find his way to her under-corset.

"Oh," Captain Lee Adama bit at his lip savagely, "I find myself unable to hold back."

With one last great tug he pulled away her under-corset and her silken chemise slid against his hands. Madam President Roslin concealed her disappointment with a stifled cry of pleasure as Captain Lee Adama spent his holy seed into his pantaloons as his hands snatched at her billowing drawers.

"I do not know if we will ever reach earth, milday," Captain Lee Adama panted, "but I know that I have on this day probed the very fabric of the Empyrean."

Carlton Banks and Hilary Banks were locked in an immodest embrace. Vulgar sweat dotted young master Carlton's face as he pushed himself within the halls of his lady sister, now lady no longer. Their forbidden passions for one another had boiled to the surface and emerged as steam.

Their judgment thusly clouded, they had indulged first in the unholy act of intimate touching to which William Smith, their guest, had been witness by way of the keyhole in the parlor door.

His eyes wide with disbelief, William Smith had fled to seek out the sibling's mutual sire and bring their indiscretion to his attention.

It was there, in the study of Philip Banks, that William Smith had located a device of unusual construction. Made from brass armatures and various lenses of magnification, one need only light a candle in the device's innards to produce a scintillating green beam as though from the ether. It was not long afore William Smith learned the purpose of this device, having shrunk first the armoire and then a bust of King Edward to a fraction of their original size.

His previous task forgotten, William Smith crept back to the door with the device in hand, intent on punishing the two incestuous lovers. He was dismayed and yet not startled to find that their indulgences had moved from those administered by way of hand to those involving the full and blessed act of copulation, therein cursed by the proximity of lineage which its participants enjoyed.

"Your loins are like the quench," Carlton Banks panted, "my iron hisses and spits."

"Not yet, brother," Hilary Banks cried, "stay your venom of ecstacy, for your blade must be pounded white hot afore it is sheathed!"

Unable to restrain his rage any longer, William Smith burst down the door, Master Philip's shrinking device clutched in his hand. William Smith was born of good stock gone to seed in the barrows of West Philadelphia, where good sorts mingled with Irish and German to produce a sort of half-man called an American.

There was no concealing his nature, for William Smith wore his clothing at odd and rakish angles with no consideration given to proper buttoning or festoonery. He was, indeed, a rogue in the truest sense and with his landed uncle's strange contraption he sought to avenge his unfortunate childhood on his betters.

Hilary and Carlton scarcely had time to scream. The green ether wafted over them even as they were still locked in the grasp of coitus and they begin to shrink. Finer and finer they grew until they were little larger than a prize agate.

William Smith scooped them up and pried them apart with his fingers. They were the size of the coccoroaches that inhabited the home of his youth, but William Smith resisted the urge to trod upon them.

"Hil, I shall place you upon my member," he explained as he began to undress, "and you will agitate it to riotous pleasure."

He did as he described despite Hilary's shrill protestations.

"Carlton," he lifted his tiny cousin to eye-level, "the sacked mills of my seed will be your new home. Scurry about and gnaw at them until your sister produces a result. Should you wish, descend further still. You may stamp your mite's feet and hands upon the aperture of my unclean waste, beating as if it were a great drum, but do not enter for it is a sin greater than any what has transpired to date."

"Will," Carlton protested, "I will do no such thing. This is an outrage!"

"Perhaps you would prefer to explore the trousers of our manservant, Geoffrey?" William Smith laughed cruelly.

Carlton swallowed his pride and nodded his ascent. Though both Hilary and Carlton felt lower than fowl, they would soon learn that the indignities of the evening had only just commenced.

From Chapter 9 - A Debt Repaid

Madam Captain Janeway was scantily-frocked in chemise and sleeping gown. Tears welled in her eyes and scarlet fire burned across her cheeks. It was a great humiliation to stand so exposed before the ravenous eyes of Senor Cerviche. She ached to return to her crew aboard the great sky ship Voyager.

Alas, Senor Cerviche was leader of these strange clockwork feline creatures he had saved her negro, Tuvok, from a fate worse than death at the hands of the villainous Seymour Cheese. Unable to repay the anthropomorphic monster in the bullion he desired, Captain Janeway had little recourse but to offer her feminine companionship. Little had she suspected that Senor Cerviche would indulge himself so greedily.

"Come here, madam," he waved her over with a claw and she was unsurprised to find him naked as always, his engorged mid-arm waving in the breeze.

"Do you wish to make me heavy with child today?" She asked.

One of Senor Cerviche's alien physiological quirks was that his embraces with Madam Captain Janeway would often lead to pregnancy and egg-laying within the span of a few minutes. She never saw the result of the eggs hatching, perhaps they did not, but each pregnancy made her progressively larger and fatter. It was such that she could scarcely walk the distance to Senor Cerviche's throne. She was like unto a cow or sow, with swollen teets leaking unpleasantly down her filthy sleeping gown.

"Not today," Senor Cerviche replied at last, "for I have another plan for you today."

Senor Cerviche snapped his fingers and a curtain parted. To Madam Captain Janeway's surprise a human male entered. He was a short and pale-skinned man with spectacles, not a specimen to inflame the lust of many women, yet Captain Janeway found herself excited by his presence.

"This is Jack H.," Senor Cerviche said with a cruel smile, "he has been directing all of our activity, and he is the greatest man in all of New Tokyo. He will be pleasuring you in a very particular way tonight."

"How is that, sir?" Captain Janeway asked as her udders began to quiver and spray out milk with anticipation.

"Do you know what the term unbirth means, Madam Janeway?" Jack H. asked as he began to disrobe.

Madam Captain Janeway was not sure of its meaning, but she was certain that she would soon discover the truth behind it.

Quite shocking in their graphic detail and arousing content, don't you agree? I am not one to lord this sort of material over our readers, so I will simply say that if demand for more proves real then that demand will gladly be met. I am never unwilling to share my collection with the public.