How to Cheat On Your Girlfriend and Get Away With It 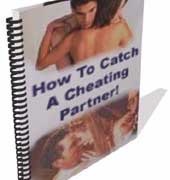 Now even this book can defeat my patented cheating technique!

You may think of me as a man of principle, one who always does the right thing and doesn't fall prey to temptation. But like you, yes, I am fallible. I too have felt the temptation of another woman. On one autumn day I was walking through a hallway at my school. A woman approached me and asked, "Do you have the time?" I gave her a good look over and imagined what our passionate night of love making would be like. But I resisted her seductive lure and said, "Sorry, Miss, but I'm spoken for." and proceeded to lecture her on what a harlot she is for trying to break up my happy relationship.

After being suspended by the dean for harassment I thought about the encounter once again. There she was, offering herself to me in a plain white t-shirt and grey sweatpants that few men could resist. She was mine for the taking and mine alone. Had I chosen to lie with the whore would I have been able to get away with it? I mulled over the situation in my head over and over again.

All men are cheaters and liars. If you want proof I suggest you take a look at this hilarious hoodie. As the hoodie suggests, men are not to be trusted. All guys would cheat if not for the fear of getting caught. To help out my fellow men I have written a fool-proof guide to cheating. But before we begin, we need to understand why men feel the urge to have affairs.

The Vagina's Always Pinker on the Other Lip

The first day of a relationship is the most exciting. Everything is new and the sex is at its most intense. By the second day, however, you may be feeling stifled by the constraints of a relationship and you'll realize that you aren't having as much sex as you once had. You'll also find out that your girlfriend may not be worthy of the pedestal you put her on and little things will start to annoy you a lot. You'll start thinking things like, "Wow, this girl has some really negative attributes. She doesn't even like The Muppet Show! I need to get out of this relationship." 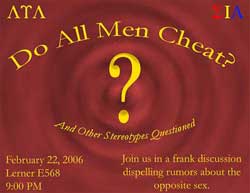 The conclusion that they came to was, yes, yes they do.

This is where the most important principle of cheating comes into play. A woman is most attractive when you don't know a thing about her. You don't know that she has tons of acne under all that makeup or that she tried to kill herself last year. You just know that from a distance of 10 feet she is an angel and the one you were destined to truly be with for about 5 minutes in the back of your Kia Spectra. No girlfriend can compete against a woman you know nothing about. It's just not possible. She may or may not have nicer tits than your current girlfriend, but you aren't going to find out by just standing there!

Everybody else has it better than you. It's just your luck. You're in a relationship with the one girl who leaves the cap off the toothpaste tube or always leaves the toilet seat up. The chick who works in accounting on the third floor doesn't do those things and she poops cookie dough. Think about it. What does your girlfriend do that annoys you? Dwell on all those things and realize that strangers are better than she is and you're ready to go.

Cheating Your Ass Off

Once you've got the urge it's time to cheat your ass off. The first step is finding a non-anime character to have sex with. Unfortunately cartoon girls don't have emotions. For example, if you try to cheat on Sailor Moon with Sailor Mercury, it won't have an affect because they are not real. I'm not saying don't do it, it's just not real cheating. You can always do it later.

While you're having your affair you need to make up an alternate persona for yourself. You can't give your mistress any personal information that may identify who you are and where you live which she might use to mess up the great situation you have going at home with the woman you are about to betray. Luckily, women are easily manipulated by simple lies.

For example, if you are really a network administrator tell her you are actually a professional hockey player. How is she going to know? By the time she finds out you'll have already cheated with her ass and kicked her out of your van after you and friends filmed yourselves having sex with her, stole her purse and watched her pee on the side of the road before speeding off.

You might have to maintain the lie a little bit. Make it plausible. Carry around a hockey stick when you go out. Remember to write "For use only in the NHL" on it. If she gets suspicious rub ice on your body and don't appear cold. If I recall correctly professional hockey is played on ice so the players must be used to the cold temperatures that ice may bring. If she isn't buying your story you might have to learn how to play hockey and make it into the NHL. It's easy though.

By far the most important decision you'll make is when to cheat. This takes a careful bit of planning. In order to get the greatest excitement out of your infidelity you have to plan your liaison when your current girlfriend is doing nice things for you. If you found out that your girlfriend is going to give you a surprise birthday present when you get home from work, that is the perfect time to bang around with another woman.

That may sound cold-hearted, but you won't be thinking about it when you are plugging some chick that let you stick it in her ass on the first try. Your girlfriend never let you do that and wanting to put your penis in a butt is a completely heterosexual thing to do!

You'll undoubtedly get home late and have to explain why. Just make something up. Don't tell her you are a professional hockey player and had a late game though. She might know you're not! In fact you'll be telling so many lies that you'll need a way to organize them all.

Go ahead and register a MySpace account and make a private profile to chronicle your various encounters and start new ones. MySpace is the safest place to keep all of your secrets that you don't want anyone knowing. MySpace uses only the strongest security solutions in the world maintained by the best and the brightest in their field. By using MySpace you'll ensure that your dumb girlfriend will never find out what you're up to!

Detective Crocodile guarantees he'll catch that cheating bitch or your money back.

If your girlfriend is getting suspicious of you the best course of action is to get even more suspicious of her. If she questions your whereabouts, question hers. Monitor her phone calls. Hire a gumshoe to track her every move. Install a key logger on her computer. Implant a GPS chip into her skin while she sleeps. Get a stool sample tested. Forbid her to see friends, loved ones and retail employees. By becoming wildly suspicious of her, you're showing her that you are committed to fidelity and could never cheat.

For example, my girlfriend told me that if she ever misses her ride home from school, a guy named Jim offered to give her a lift. Heh, oldest trick in the book. Men don't help women for no reason. Oh there's a reason alright. When she told me that he is 34 and happily married with two kids, I knew something was up. Those guys are the ones most likely to cheat! In fact, I accused her of lying to me and living a double life all along, that she is really married to him and those are her two kids. Whore! Get out of my studio apartment! Don't slam the door, bitch! You'll knock down my rare Star Wars collectibles!

Once a woman has been driven home by a man, she is more than obliged to open her legs up for him. Gas is still pretty expensive. It's probably happened already. It plays out the same all the time. "Would you like to come up for some coffee?" I bought that damn coffee. They probably screwed already. They fucked right in my bed, didn't you?! Probably while I was in it playing Viva Piñata. DIDN'T YOU?!?! THAT WAS MY COFFEE.

Hopefully you lucked out and she was cheating on you all along. Now you have a get out of jail free card and can cheat on her anytime you wish with no repercussions. Don't worry that you already used up your cheating opportunity. You only used up the one free affair that every man receives at birth. It's our God-given right and placed in the Constitution of the United States by our founding fathers who cheated on all their wives with enslaved black tail. Hooray for democracy!

There's one question people always ask me. Why not just break up with your girlfriend if you don't like her all that much? Well, you probably just signed a lease with her, and that's a bond that can truly never be broken.

At some point you will be caught. I never made any guarantees to the contrary. Maybe she found a long blonde hair on your jacket. Perhaps she noticed missing condoms. Maybe she found your hockey stick, a sure sign a man is cheating.

If you keep your cool things will hopefully blow over and your girlfriend will feel so worthless that she'll realize she doesn't deserve any better than you and stays. Congratulations, you've got yourself a doormat who will iron your socks and look the other way when you stray! Of course, she will eventually kill you and then herself, but for the last few months of your life you'll have the keys to the pussy warehouse.

Watch out! If you end up getting found in bed by her boyfriend, it usually goes down like this.

In this increasingly P.C. society men are becoming wusses, unable to fulfill their most basic need, to do whatever the hell they want with no repercussions at all. Men, assert your rights, or one day you may be staring down at the barrel of a gun regretting your life of loyalty to women. Don't say I never warned you.