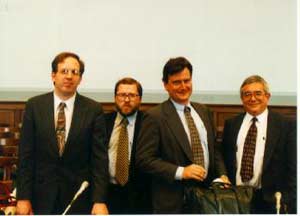 Thursday evening, the U.S. House of Representatives passed a resolution that essentially gives Bush the freedom to wage war against Iraq. That's right, I can follow politics, too. Like most red-blooded Americans, I'm largely in favor of war as a concept. Nothing beats war for blowing up stuff. War drives our nation. It bolsters our economy, raises our morale, and spawns a number of crappy movies, followed by a series of gritty, realistic movies based on true events, but with sappy love stories thrown in for the ladies. However, I can't help but question this war on Iraq. Don't get me wrong, I'm not one of those longhaired, folk-singing, poetry-writing, colorful shirt-wearing peaceniks, with their naysaying attitude and baseless arguments like, "don't kill people," or "every major world religion says 'don't kill people.'" I hate Saddam Hussein as much as anyone else. He's a tyrant and a murderer, and he never responds to my letters, and that makes me cry. But he doesn't care, because he's Saddam Hussein. Like the rest of the planet, I want to see him overthrown. I'd overthrow him myself, if I hadn't hurt my back playing Warcraft 3. It was a really intense game. I've heard the so-called "experts" talk about how the Middle East wants to get rid of Hussein, too, but they don't want the U.S. to get involved. If you ask me, they don't know what they want. They're a bunch of uneducated, nomadic heathens, like all foreign people. I can say that because I'm a horrible American stereotype and all my beliefs are automatically correct, by merit of America having a lot of bombs. 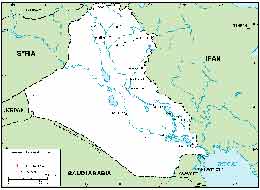 Iraq will be a lot easier to identify when it's a smoldering crater.

So what's my problem with the war? Well, it just seems a little too easy. When Iraq invaded Kuwait, we spanked them so badly that every Iraqi had to wear a nametag that said "Hello. My name is Spankedy McSpankedyspank-Spanklestein" and walk around like that for a whole week. We also gave Kuwait t-shirts with "I'm with Spanked" written on them, and an arrow pointing to Iraq. It was classic. Iraq pissed us off, we kicked their asses. After 9/11, we launched our war on terrorism, which we began by blasting Afghanistan into tiny, Afghanistan-shaped pieces. That sent a powerful message to the terrorists of the world: if you mess with us, we will turn your entire country into heathen rubble. That was a good start, but the war on terrorism couldn't end there. We looked into some local, low-cost options, like bombing the hell out of Canada, but we came to the conclusion that we liked having Canada around, because we can take their stuff and ridicule them constantly, and they can't do anything about it. Canada - the Ned Flanders of the free world. Still, we had to wipe some country off the map, so now we're about to go to war with Iraq again, which is all well and good, except that they haven't really done anything to piss us off lately. Sure, Saddam's a dick, but he's keeping the invasions to a minimum these days. He won't let U.N. inspectors into the country, but that's nothing new. It's like he's afraid they'll find the baggie of pot in his underwear drawer. The U.N. says Iraq may have a nuclear device in development. We have enough nukes to blow up this planet, and any other pissant planet that gets in our way, and we're afraid that Iraq might just possibly have a device. If we fight this thing seriously, Iraq will have no choice but to pull a France and surrender in the first week. Then we'll have to find another country to de-terrorist, and the whole thing will start all over again. Obviously, that's no good. This war has to drag out so that we can win just before the next election, thereby securing a second term for Bush, just like it did for his father. Wait...

Every American soldier is an army of one, but with the buddy system, every soldier is just an army of one half! Each soldier will be paired up with a buddy. The buddies must hold hands whenever they are in the field, leaving them only one free hand apiece for killing the enemy scumdogs. In addition, the buddies will not be allowed out after dark, and will have to look both ways before crossing any street. If one soldier is shot, his buddy must remain motionless until he can join hands with another pair of buddies. Two separated buddies may join together to form a new pair, but only by running frantically toward one another, waving their arms and crying. The buddy system, properly implemented, will reduce our army's ability to slaughter the Iraqis quite so quickly, while also protecting our boys from being accosted by strangers in vans.

When our troops storm into the major cities, like Baghdad, Sandburg, and Iraqville, they won't be equipped with high-powered rifles, but with the most bitchin' paintball guns money can buy. Paintballs won't kill the enemies, but they sting like heck, and once hit, any Iraqi will undoubtedly have the good sportsmanship to lay down and stay immobile for a good thirty seconds. With the enemy activity halting constantly like that, any battle should stretch out for a good long while. At the same time, our hardworking soldiers will get to have some good, messy fun. It'll look like someone tie-dyed Iraq! At least, it will until we bomb the place into the Paleolithic era. 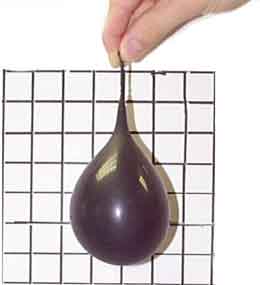 The water balloon - simple, yet deadly. Well, not quite so much "deadly" as "pointless."

Sure, we're eventually going to reduce all of Iraq to cinders. Until then, though, we'll give our brave pilots H-bombs - H2O, that is! Each one of our bombers will carry literally thousands of water balloons, which they will drop with lethal precision. This may sound like a stupid idea, but anyone who's ever been hit by a water balloon dropped from fifty thousand feet will tell you otherwise. The water balloon attacks will gradually become worse - not because we'll be dropping a greater number of balloons, but because we'll start putting flesh-eating bacteria in the water.

What's faster than a U.S. marine running at top speed? A greased marine running at top speed! Two soldiers strip down to their skivvies. Both of them are given signs to wear around their necks - the first with a one on it, the second with a three. The soldiers get greased up like pigs, and are then sent running through the enemy base. Hilarity ensues as those whacky Iraqis scramble to try to get their hands on those slippery rascals. Even once number one and number three are caught, everyone will still be looking for number two! It's a great practical joke, it wastes surprisingly large amounts of time, and gives the rest of our troops time to sneak into the base and steal all the ammunition, causing more time-consuming havoc. As for the two soldiers who get caught, they will be remembered as the greatest heroes of all.

Taking a cue from Mack Hail's dynamic performance in his cinematic masterpiece, "Mr. Ice Cream Man" (read the review, damnit!), none of our soldiers will be permitted to speak and move simultaneously at any time. Whether it's in the field, or over a meal, everyone will be required to complete any action they wish to take, pause, then say whatever's on their minds. The time needed to give orders will be greatly increased, especially if the commanding officer paces. Meanwhile, the enemy will be driven totally insane by such behavior and will start writing incredibly long humorous articles, delaying their own maneuvers.

I could probably go on, but it's late, and I'm tired. Plus, I'm just one man. I can only do so much. If you have some suggestions to help the courageous men and women of the American military keep the war going as long and as irritatingly as possible, don't hesitate to send them to me. Maybe I'll post them! Probably not!