If you've been paying any attention to the behavior of the person who was just elected the president of the United States, your brain is currently freaking out. The most influential country in the world is about to be run by the kid who clearly forgot to read last night's assignment and winged his oral report by denouncing literacy. Things are going to get real bad. There's nothing you can do about it. You can't let the thought go. 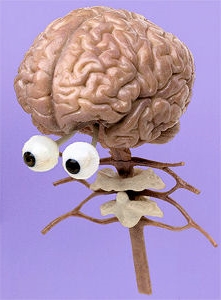 The problem is, you still need to live your life. In any given day you are required to think about several things, if not dozens of things. Bathing, clothing yourself, eating, working, and interacting with others all require your brain. How can you do any of that stuff when every synapse is dedicated to processing the reality of our garbage world again and again, as if running the problem through your mental calculator will uncover a different result?

I have a coping mechanism. It should help you concentrate.

Let's say you need part of your brain to think about making breakfast but you're standing still, your eyes wide and unseeing as your entire brain performs the following loop:

30 PRINT "I WASN'T IMAGINING IT WHEN HE FREELY ADMITTED SEXUAL ASSAULT, CHASED EVERY OBVIOUS PIECE OF BAIT DANGLED IN FRONT OF HIM BY OPPONENTS, ENCOURAGED RACISM/SEXISM/VIOLENCE, AND SAID HE WOULD BLOW UP FOREIGN VESSELS WHO TAUNT US THEN CLAIMED THAT WOULDN'T START A WAR, RIGHT?"

40 PRINT "THIS CAN'T BE HAPPENING"

So how do you free up enough brainpower to make breakfast? You can't just shake your head and tell yourself to concentrate. Slamming your fingers in a drawer will externalize the pain, which can be cathartic, but far too short a reprieve.

Go on, give it a shot! Just keep repeating that thought, and in no time at all you'll be shuffling around like an automatron, numbly going about daily routines in a state of suppressed anxiety. Sooner or later the mantra will wear off. At this point, I suggest switching to another neutral phrase. How about:

"Oh, what the fuuuuuck?"

"Seriously, what the fuck?"

When these wear off... well, I don't know. Tell me if you figure something out. I'm a little distracted right now.