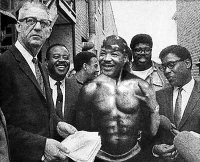 I was originally writing an article about Martin Luther King Jr. but it sucked, so here's a picture of him thugging it up.This Thursday, January 20, 2005, throngs of primarily rich Americans will descend upon Washington, D.C. to witness the quadrennial pageant of the presidential inauguration. During this event, the greatest spectacle of democracy in the world, hulking men with enormous machine guns will patrol the streets and alleyways of our nation's capital, prepared to spring into action at the drop of a hat to protect democracy from those who might wish to thwart it. Helicopter gunships bristling with weaponry, slavering dogs straining against their master's leash, rooftop snipers drawing a bead on those displaying the slightest whisper of Arab ancestry: the cogs of America's vast machinery will be turning steadily to ensure that our tribute to democracy goes off without a hitch.

The 2005 festivities are shaping up to be a spectacular affair, and will include no less than nine official balls, a youth concert, a parade, and a fireworks display. Planners estimate that the total cost will approach $40 million, but then, who can really put a price on democracy? A formal ceremony in which absolutely no power is transferred whatsoever certainly deserves such grandiosity.

Of course, since the presidential inauguration is one of America's richest and most lively traditions, from its earliest incarnations it has been a great source of spectacle. Here's just a small sampling of factoids about inaugurations through the ages: 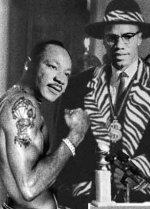 And here's MLK and Malcolm X accepting some sort of award, I don't know what the hell I was thinking.

Whew! With your newfound perspective, I hope that Thursday's pomp is that much more meaningful to you.