Overstocking for this 4th of July season has left us OVERLOADED with boat loads of high-quality fireworks that we are selling for LOW, LOW PRICES. We have everything you can imagine, including snappers, red whistlers, lightning sticks, and even angry toads, all being sold at DISCOUNT prices to you, the Internet customer. This is a sale of EPIC proportions that you simply can’t afford to miss! If you squander this opportunity to buy a wheelbarrow of cheap fireworks then you will die a lonely and spiteful person, full of regret and SORROW.

The reason the Crazy Frolixo warehouse is so overstocked this season was because Frolixo OVERSLEPT and missed the 4th of July completely. Profit from his folly! Opportunities like this only come once a season, like last year when he forgot his lighter, or the year before when the cops where called after he molested a scarecrow. DON’T MISS OUT!

Blue Snappers
Fun for all ages, the first Blue Snapper was made in China by some Asian dude who was totally high on opium and mixed gunpowder with peanut butter and chocolate when he had the munchies. We like to call these ‘Lil Blues, or “nut snappers” because they sting like heck if they blow up while strapped to your testicles. I got a whole bin of these things and I’m selling them at some insane prices here. Frankly, I’m a little afraid of being committed because these prices are so goddamn zany.
Price: 1 pack $4, 2 packs $7.

Whistle Rods
This is a fantastic firework for all ages and comes in a variety of festive colors. Once set off, they will shoot into the air, pop once, twice, thrice, and shower the old people and children below with an airburst of hot embers. Half the fun is putting out the fires and waiting for the skin grafts. They are named for the whistling sound they make after the fuse is lit, which happens because the firecracker is in pain and screaming in misery.
Price: $14 a bundle

Angry Toads
These are my favorite and it’s a shame to have to sell them at such low prices, but I know if I keep them around I'll be setting them off in my bathtub during an absinthe binge, pretending I'm in some old Louisiana swamp with exploding toads and I'm a bayou wizard. The last time that happened the landlord broke down the door and found me in the tub dressed as Gandalf, the steaming, murky water bobbing with the charred remains of the toads. He dragged me into the street by my beard where I screamed, thrashing about in my wet undergarments. Oh god, it was horrible.
Price: $5 per toad. 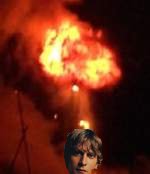 The Rob Thomas Experience
Popular musical artist, Rob Thomas, has entertained millions of fans for millions of years as the front man for the band "Matchbox 20". He has recently left the band to start his own resoundingly successful solo career. Now you can enjoy all that is wonderful about Rob Thomas in the form of a wacky and fun firework. Highly explosive, just like his songs, the Rob Thomas firework is a treat for the senses. Just don't set off the Rob Thomas Experience near any small children or animals. It may cause slight cancer in newborn babies, but this issue is being dealt with at the Rob Thomas Cancer Treatment Center that was opened after the rash of cancer cases were brought to the manufacturer's attention. When a Senate Congressional committee was called to deal with the Rob Thomas Experience, Rob testified that he didn't even know he was made into a firework. When he asked his publicist about it, he was shot in the neck with blowgun and thrown into a burlap sack. I recommend this firework, unless you are a newborn baby or hate cancer.
Price: $20

Bouncing Betties:
Shipped from the heart of the Vietnam jungle, these rare fireworks are tons of fun to set off on the 4th. Just set the trigger and bury them three inches below the soil in high traffic areas, like your neighbor's yard. As the neighbor-bratlings run about and screech, their tiny feet will trample the Bouncing Betty, setting off the sensitive trigger. From a powerful spring located in the undercarriage of the device, the charge will be launched to about midsection to a man, or head-height to a full-grown child. The charge then explodes, causing massive trauma to flesh and bone. Little bodies, scorched, scattered. Faces contorted into twisted, charred smiles. This is what the 4th of July means to me.
Price: A barrel of rice or necklace of ears.

The Pink Vagina
Don’t let the name fool you; this firecracker can pack a punch. It's a very rare firework that had a limited production run in 1992 by the Lifetime Television Network, but was halted after poor sales. I bought 75% of the warehouse surplus and have been setting off Pink Vaginas every 4th of July. After lighting the fuse, step back and enjoy the vagina opening up, and spraying a rainbow of wonderful colors into the sky. USER WARNING: Stand your ground right away, or the next thing you know you'll be buying it expensive jewelry and going to see "Sisterhood of the Traveling Pants" during a basketball playoff game.
Price: Half of what you own. 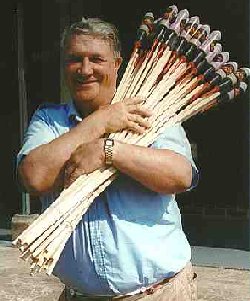 This is a picture of me with my fireworks. The government will only pry them from my cold dead hands.

Yes Dear: The Firework
The same creative powerhouse that brought you The Rob Thomas experience now brings you Yes Dear: The Firework. Based loosely on the hit TV sitcom of the same name, this firework is simply a delight for the whole family, bringing the crazy antics and mixed up situations from the small screen right to your back yard for you to blow up. Each package of these fireworks also comes with a Yes Dear napkin caddy and a mild case of cancer. Yes, these have the same carcinogenic laced smoke as the Rob Thomas Experience, but don't fret, help is on the way in the form of low-key court settlements.
Price: $15

The Big Motherfucker
This motherfucker is big. With more firepower than 10 ½ sticks of dynamite, it is the king of fireworks. Bow down, for you will be humbled before such massive power. The main chamber of the Big Motherfucker contains 12 rockets, 32 smoke bombs, 200 Dragon Snaps, a sack of M80s, a Yes Dear, and a whole mess of strawberry jello. This really is the ultimate encore for a party ender, mostly because of the ruptured eardrums and loss of limbs, but also because nothing can top this. It has been outlawed in 48 states, and has the death sentence on 12 systems. I don't recommend lighting this yourself unless you are an Olympic sprinter or a cheetah. If you are a cheetah, you should also probably get back to the zoo for your own safety.
Price: I only have one for sale for one million dollars or a handjob.

If you miss this HUGE sale then you are an idiot and a Communist. America became the greatest nation the world has ever known by blowing shit up to reach to top. It is our duty as God-fearing patriotic Americans to light as many explosives as we can afford, regardless of whether it's 2:00AM on a work night. When the police and fire department come to question you about the Big Motherfucker that destroyed your neighbor’s shed, raise your flag high and defend your freedom. They will never take you alive if you enough Turkish candles. ACT NOW!

Send all orders to P.O. Box 2837, Rylokiovink, Greenland, small cave, 2nd hole on the left. I've been banished for throwing a cherry bomb into Carl Rove's ice cream sundae, splattering it all over his surprised, cherubic face. I'll be back someday.