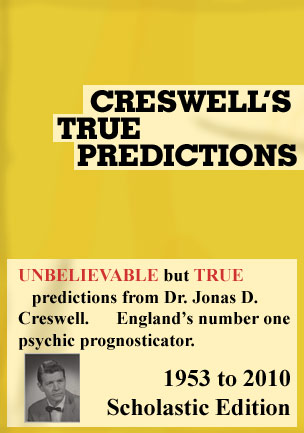 Creswell Predicts: In the Year 1996

1996 may seems as the distant future to you or I, but in truth it is just another year that will come soon after the next year. If it would please you, imagine yourself in the year of 1995. Thus, the predictions I will make for 1996 will seem to you only one year or less in the future and less likely to stupefy you.

This year will see Yuri Valisovich's predictions proved even more false than the previous year. For the world, 1996 will at last certify myself as the superior prognosticator and relegate Valisovich to the carnival circuit, where he is perhaps equipped to guess a woman's weight. 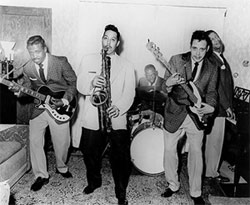 On the date of January 19th President Johnny Ace of America will play a rock and roll concert for all of Japan. He will also symbolically marry a Japanese baby named Koko, cementing the alliance between Japan and America.

On the date of January 25th a British atomic rocket bringing dunorium ore from the Queensland moon base will crash land in Bethlehem, Israel, destroying the final Jews.

On the date of March 6th the Neo American Free Trade agreement between Canada, America, and Mexico 2 will be signed by delegates. While most feel it will be beneficial to the economies of all three countries, many in Mexico protest and riot in the fear that their jobs may relocate up across the border.

On the date of May 19th the Moscow Peace Tower will be completed, allowing Russian Czar Detrimov to beam hypnotizing "peace signals" around the world to the location of his choosing.

On the date of June 4th the Italian heavyweight boxer Bruto Calhouni will declare war on Greece. His automobile will be stopped by Greek border patrols and Calhouni will be turned away before he can seize Athens.

Natural Events of Some Significance 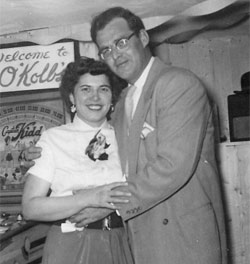 On the date of June 29th a large meteor will strike in Vermont, America, damaging several houses but killing no one. The meteor will later turn out to be a chest full of platinum crowns being carried by the Spanish treasure rocket El Mariachi. You might remember this particular atomic rocket from 1994, when I predicted that it will be knocked from space by an invisible type of radiation that only harms Spaniards.

On the date of July 1st in Kansas, America a tornado the size of a kettle will appear downtown and refuse to budge from its spot. The terrified townsfolk will eventually become accustomed to the tornado. When it finally disappears after 100 days they will erect a statue to honor its memory.

On the date of August 9th all gravity will stop working in Canada. This will last for only a few seconds, although several dozen children will be slain when their bounces on trampolines catapult them thousands of feet into the air.

On the date of August 30th an earthquake in Wyoming, America will uncover a small hill dating back to the earliest days of the Indians. Several Indians will try to claim the hill but the American army will instead build a cannon atop it.

On the date of October 2nd the BBC will announce that their weather devices have become so sensitive they can tell you the temperature of your children one day in the future. The BBC will send temperature guns in the post that allow parents to fire harmless x-ray particles at their children and the teletron screen will display what their temperature will be in exactly 24 hours.

On the date of October 31st the Halloween will be marked by the construction of a pumpkin one kilometer tall in Brisbane, Australia. On November 6th a group of children will smash it to pieces with a three kilometer long cricket bat, flooding Brisbane with rotting pumpkin innards.