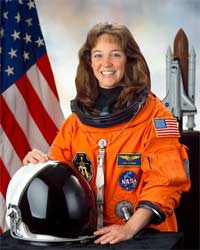 Before outer space. Would you drive 900 miles, urinating in a diaper to avoid stopping, for true love? Probably not, and that is why you are not astronaut material. Astronauts are trained to go all the way, whether that be leaving the planet riding on a sustained explosion, or driving to Florida to teach a bitch a lesson. Usually they go all the way for the right reasons, such as repairing busted satellites and delivering new science modules to the International Space Station, astronaut society's secret hideout. Every so often, though, an astronaut crosses that Kármán line of morality and all hell breaks loose.

Driving 900 miles nonstop was just what astronaut Lisa Nowak did in her quest to kidnap a romantic rival. One long drive for man, one giant pants wetting leap for insanity. Rather than waste time with bathroom breaks, she peed in adult diapers along the way. This is standard during launches and reentry, where any attempts to urinate in a regular toilet would result in urine going the wrong way due to the tremendous g-forces at play. This is also standard procedure on space walks, where it would be impractical to space walk back to the shuttle or station, undress, urinate, redress, and then space walk back out. Just pee in your suit and no one's the wiser. It's the same with YMCA swimming pools, except you don't need a diaper and there's more gravity and sometimes a retarded kid approaches you in the showers and he's like "What's up?" and unfortunately it's him.

A lot of you will ask how a highly trained NASA astronaut could end up going so far off the deep end. Some might say that space is filled with a dark and formless evil, ancient if time applied to it, desperate for a host to give it form and function. Women, being naturally empty inside, could potentially act as vessels for such nebulous evils. However, that theory is murky at best since the other female astronauts haven't gone insane... yet. Perhaps it was radiation from the Van Allen belt that melted her mind, destroying its natural chemical balance and making her prone to jealousy, paranoia, and bad hygiene? I'm no scientist, but I have peed my pants before, and both of those possibilities sound shaky. I think it's something simpler, which I will get to shortly.

Lisa Nowak, a modern day Major Tom, may have shamed NASA with her downward spiral, but we must remember that she is a human female, subject to emotional outbursts and flights of fancy. And besides, what is an astronaut? Wikipedia, the encyclopedia as written by people with Asperger's, defines the astronaut as:

An astronaut or cosmonaut is a person who has chosen space travel as a profession.

Nowhere does that definition mention that the astronaut must embody saintly morals and pristine character. I will admit that this is a flawed definition, primarily because of the audacious assumption that we choose space. No, my friends, space chooses us. We are ambassadors of the deep, a title we reluctantly share with submariners and miners. I feel space has chosen me, as I often peer upward and think, "I sure would like to go there." However, I remain unemployed in my space endeavors. I have often contemplated turning to a life of crime to support myself in lieu of space work. In that sense, I can empathize with crazy lady Lisa Nowak in her disregard for the law. 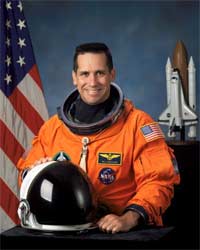 Zero-G Hustla Already it has been revealed that Lisa Nowak intended to kill her rival, believing her to be pining for the love of handsome astronaut William Oefelein, a man who captured many hearts during STS-116, which he piloted completely shirtless. Nowak loved him so much that she couldn't stand the thought of losing him, causing the seal on her emotional O-ring to fail. With attempted murder under her belt, it is doubtful things will get any better for Lisa Nowak. In all likelihood she won't be invited back to space, won't be allowed to teach at space camp, and will probably spend some time in jail. I'm also guessing Larry Flint will offer her $500,000 to pose for Hustler. The pictures will be classy, of course. Likely they will be set against a fake moon backdrop with some dude painted green seducing her, as Moon Men tend to do.

The fact that an astronaut turned to crime does put a hilarious out-of-this-world spin on an ordinary story of crazy romance, but would we care if she was just something boring like a marine biologist and her lover was a whale and her rival was a dolphin? No, we would shrug our shoulders and think nothing of it. Besides, many astronauts are already criminals. Let us not forget the cosmonaut, the Russian counterpart to our glorious spacemen. Most of them were communists, which is far worse than ever kidnapping and attempting to murder a romantic rival. You don't see anybody demonizing them. And what about those monkeys and dogs that went up to space? Were they without fault? They are animals, after all. 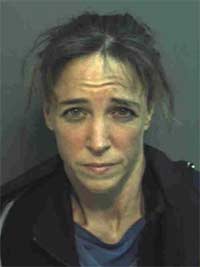 After outer space (and a dirty diaper) The human heart is a strange and irascible creature that wants so much to escape us, just like the astronaut longs to escape the planet. Lisa Nowak's heart was caught in a darkest gravitational pull of them all: love. A love of kidnapping and killing rivals, sure, but love nonetheless. And like space, we don't choose love. Love chooses us. Riding out love is like riding a sustained explosion into the sky. You might make it, or you might burn up along the way. And when you do make it, there's always the danger of a bad reentry.

This is just the first of many astronaut crimes of passion. We can expect many more, and they will likely escalate in severity, in direct relation to the growth of the New Space Race. I see two possible solutions to prevent future astronaut crimes of this nature. Solution one would be to require all astronauts to limit their crimes to outer space. In outer space they can do all the kidnapping and murder they want, and it won't have any impact on us because we live on the planet and that's not going to change anytime soon. To encourage them to keep their crimes to space, we can promise not to persecute them. It isn't like space falls under any legal jurisdiction anyway. The second solution would be to institute a zero tolerance policy against all astronauts. We treat them like terrorists and turn the International Space Station and Space Camp into a jail and an internment camp. If we keep the astronaut element separate from the rest of humanity, they will never be able to kidnap and murder us.

Both solution works, and I think that they may well be necessary for the continued safety of mankind. The last thing anybody wants is a crazy astronaut with a wet diaper showing up with murderous intent.

Finally for those of you who came here for comedy, here is a joke I just wrote:

Q: Why is the otter astronaut so antsy?
A: He can't wait to get back to otter space!