I Went to Cambodia and Took Some More Pictures

Basically I'm only going to talk about that last one, but the first two are always good to keep in mind. If you would like to read more about Cambodia and what it's like to have water automatically sprayed up your butt by Koreans, please click here to see part one of this article.

And now for more stories from that place near Vietnam and Thailand: 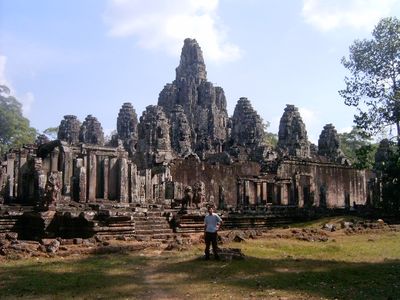 We made friends with a French waitress at a restaurant called the Taj Mahal near the old market. The restaurant actually served Pakistani food, but you'd never know it wasn't Indian if you didn't talk to the owner. I did talk to the owner. He moved from Lahore, Pakistan to Cambodia a year and a half ago. I asked him why he decided to come all this way and open a restaurant in a small tourist town a subcontinent away from his home. He shrugged.

The best beer in Cambodia was Beer Laos, though.

But this story is not about him. It's about the waitress. She was traveling through Asia with some friends, working as they went. She'd been in Cambodia for about six months. Next she would be going to Laos. She expected to be traveling for at least two years. She was not the hot kind of French woman, but the broad shouldered kind of French woman whose body shape resembles an American football star.

She told us her name, and we both forgot it immediately. Our guilt over this was not helped by the fact that she knew our names even though neither of us remembered telling her them.

"Josef, Diaaana, how are you doing on this day?" she asked every time we passed by the restaurant.

"We're doing great…uh, friend." One of us would reply. "And what is up with you?"

"Oh you know," she said, dancing along with the Bollywood videos that play continually on the TV, "still working."

On the last day I got very sick, and ate steamed rice as Diana ate an entire vegetarian meal across from me.

"You come here with your own bottle of water and eat free rice," said the French woman. "You are the worst customer I've ever had."

"And you are not getting a tip," I said, slipping a 50% tip into the bill holder.

I think I will remember her name as Amelie. Basically all French women are called Amelie. I learned this from the movies. 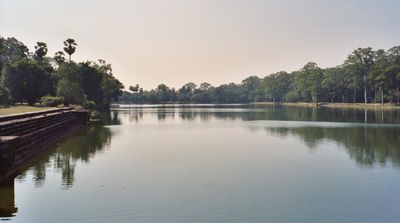 This moat was hand-dug by Cambodians right around when Europe was getting busy with the Crusades. Of course, the moat's nothing, because they also dug this by hand.

Cambodia, like most countries pulling themselves out of a history of colonialism and war, survives mainly on its ability to sell things to the Western world. Which makes it strange that every Cambodian, without exception, is absolutely hopeless at doing just that. It is not a matter of intelligence or superior breeding, but a simple case of cultural difference. For instance, when a Westerner wishes to sell you something, he or she sells you it. When a Cambodian wishes to sell you something, they wave it in your face while continually screaming "OK? OK?" until you run faster than they can or you trip them.

Nowhere is this problem more evident than in the case of beer girls. Beer girls are women whose job it is to hang around bars and sell you a particular brand of beer. One can imagine the kind of tactics a woman in this position would use, but one would be totally wrong because instead of flirting or making the beer seem at all attractive, they run up to you with a picture of the beer bottle and start doing their best to bully you into brand loyalty. Incidentally, Lonely Planet Cambodia has no section on the local etiquette for hitting a woman over and over until she shuts up. Believe me, I checked.

Because of this, most tourists will walk a good half mile out of their way to avoid the gauntlet of getting within shouting distance of any place that has any sort of item for sale. Of course, this baffles the Cambodians and only causes them to shout louder, and maybe get in their vehicles and drive after you, waving a bag of sliced pineapple out the window and asking you if you're ok with buying it while they run you over. It is the classic case of the gap between cultures, a gap that could be bridged if only Westerners could talk loud enough to be heard over all the Cambodians. 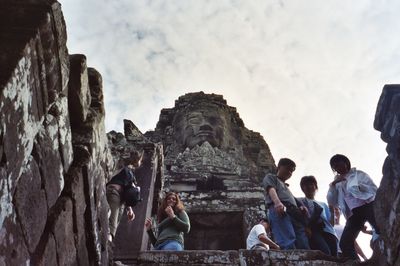 After six days at Siem Reap and the ruins of Angkor, we took a four hour taxi ride down Cambodia's one major highway to its capital. "Major highway", of course, implies that there wouldn't be herds of water buffalo sleeping in the middle of the road, and that traffic wouldn't be stopped for half an hour while two guys pull a giant cart of hay half a mile, so maybe calling it a major highway is a stretch. Let's just refer to it as The Road In Cambodia Least Likely To Have Mines Right Next To It.

We planned to stay in Phnom Penh for three days, but changed our minds soon after arriving. The city was dirty and crowded, and its major sights consisted mainly of stuff that they'd chipped off of Angkor and carted down. Crossing almost any street became an involuntary live reenactment of Frogger. If you want a similar experience, I would recommend finding the busiest freeway in your area and running across it at dusk. If you survive that, then you're ready for Cambodia, but unfortunately they don't have many arrangements for wheelchairs.

That night we drank at a bar that served Tex-Mex food, and the next day we visited the Silver Pagoda, famous for its silver floor. To protect the floor, they cover all but a few feet with a large carpet. We snapped a few pictures and imagined what we would be seeing if we were seeing anything. Diana decided to call Phnom Penh "The City of a Thousand Lingas." A linga is a sacred Hindu phallic symbol, and it certainly smelled like a thousand guys had been pissing all over the place.

We took the trip back to Siem Reap that afternoon, backpacks full of clothes and pirated DVDs from Phnom Penh's markets (shh, don't tell anyone). Our guesthouse was surprised to see us again.

"Back already?" the woman at the desk asked.

"That's right," we said, and drank some Chinese tea on their garden patio, watching the evening traffic of a couple motorcycles and a small flock of chickens idle by. "That's right." 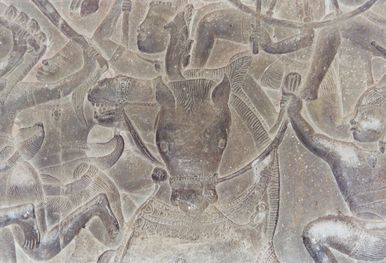 An Angkor Wat carving of a horse turning to look at you, doing what Picasso would famously get credited for several hundred years later.

Cambodia is staggering out of decades of war right into the booming business of tourism. Only four years ago, Phnom Penh was listed on The Economist's "Top 10 Most Dangerous Cities in the World". Now you can eat buffalo wings and play pool at a Tex-Mex bar. What this means for anyone going there is that it is safe enough to wander around and look at things, but early enough that all the interesting rough edges are still showing.

I noticed that in today's update I talked mainly about the things that were unpleasant or disappointing on the trip. These stories are not representative of all Cambodia has to offer, although they are certainly things you would have to deal with if you went there. There are those people that would desperately want to go even based on the worst of the stories I could offer. If that is you, then Cambodia is a great destination. I would highly recommend the country to anyone with a decent sense of adventure and a whole lot of patience.

And if you are discouraged by the transit time (for us, 30 hours, including a 13 hour lay-over), just remember: In the likely event that you die in Cambodian traffic, you won't have to spend all those hours flying back. 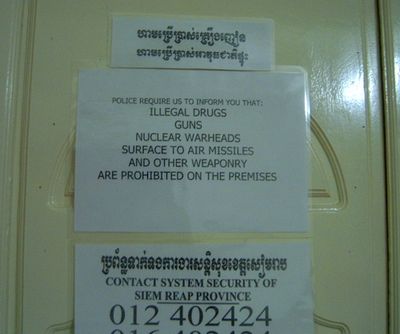