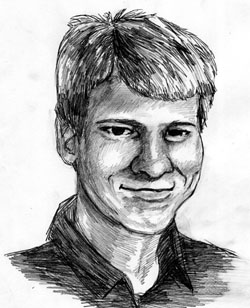 Ilustration by Ryan Pequin If you went to a high school of any decent size, you knew a special-ed kid who loved breakdancing. It's one of those basic archetypes that exists all throughout history and in all cultures. I don't know how many not-all-there breakdancing kids there are in America, but I figure you could get a pretty accurate estimate by taking the total number of high schools in America and adding two. Because there were three special-ed breakdancing kids at my school, and I'm pretty sure it's just because I'm lucky.

This is the story of just one of those kids: Bust-a-Move. The other two semi-retarded breakdancing kids have beautiful stories of their own, but neither have had quite the same inspirational impact on my life as Busta. They were great kids, all three of them; one of them is a daddy now, and I found him on Myspace. Internet profiles can be so impersonal, but this kid's inner light really shines through:

Heroes: That one not sure oh yah that would be me just kidding, I like spiderman,superman,flash ther are some others

But I digress, and probably confuse. That's not the kid I'm talking about. That's one of the other two semi-retarded breakdancing kids, and like I said, he's his own special kind of guy, but this article is about Bust-a-Move.

Bust-a-Move was rail-thin, blonde, gawky and pale. He always hunched forward and exhibited a facial expression halfway between a knowing smile and utter confusion. He had a perpetually overgrown crew cut that was filthy, just short of being matted. If you picture in your head every connotation of the word "bumpkin," you'll probably come up with a pretty accurate mental image of the guy. He spoke with a slow, authoritative voice. He didn't convey the impression that he knew what he was talking about, because he usually talked complete nonsense, but he made you believe that he thought he knew what he was talking about.

Everybody knew him, although I don't think anyone knew him by name. We knew him by a name: Bust-a-Move. He got that name by busting moves. At every assembly or school function, totally without concern for decorum, the boy would get out on the floor or stage or whatever and pop some fresh moves. He was terrible. Half the crowd would throw stuff at him, and the other half would egg him on. He had a limited repertoire: he had the flailing handstand, during which he would prop himself up like a tripod on his head and arms and swim his little legs in the air like a rat that's been picked up by the tail; he had the spinning-on-the-ground thing, where he would spin on the ground; he had the headstand where he would "freeze" with his legs in the air, then topple over sideways. If there were any besides that, I can't remember them. 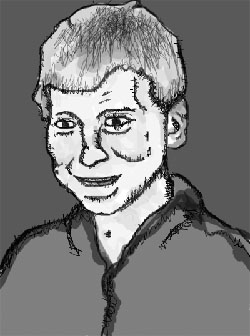 Illustration by Anonymous High school wasn't traumatic or triumphant for me, it was just a place to go. I wasn't popular, but I wasn't disliked. I was neither shy nor outgoing; I was just a regular guy. I was kind of an asshole, but I don't think I did any permanent damage. If anyone still wants to kill me, it's probably because they're crazy. My friends and I hung out in a corridor with a row of benches on one wall and a row of windows on the other. We sat on the benches and looked out the windows into the Freak Aquarium, which was a rose garden where all the drama nerds and low-rungers hung out. We used to have contests to see who could last longest in the Freak Aquarium without getting freaked out and having to leave. The record was something like 30 seconds. Have you ever been near a drama kid? My skin is crawling just thinking about it.

Bust-a-move earned his name by walking down this corridor. Whenever he came by, we'd yell, "hey, bust a move," and he usually would. He'd tell us about the new moves he'd been practicing, followed by live demos. They were basically the same three moves, but we weren't going to make a fuss. Sometimes we had requests. "Hey, Bust-a-Move, can you do that thing where you run up a wall and do a backflip?"

"No, the doctor says I'm not supposed to do that one anymore."

Sometimes we'd incite him a little, because we really wanted to see him tackle that classic. He'd make a show of sizing up the wall, giving it a little kick, jogging up to it and testing his mettle, but he'd always conclude that he wasn't quite ready for it. I'm pretty glad that we never convinced him to try, since he'd usually fall down after even the simplest of moves. He'd attempt his trademarked headstand, topple over, and lay stunned on the ground for a few seconds.

Then he'd get back up and, rub his elbow like an injured Jackie Chan, and slink away. Who knows; maybe he wasn't okay. Bust-a-Move was a bit of a liar, but we didn't hold it against him. "My best friend died a year ago today," he told us. "He jumped in front of me and took seven bullets in his chest."

If seven bullets have ever been fired in Eureka, I doubt that any were fired at a boy so loveable as Bust-a-Move. 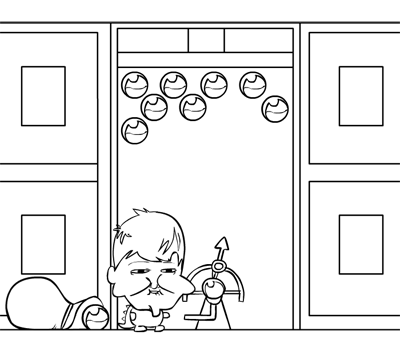 Sometimes, crowds would gather at either end of the corridor as Bust-a-Move danced. He relished the attention, and we loved giving it to him. We weren't laughing at him, we were just happy to let him have a good time, and he was happy to bust moves. He was a serious and intense kid- who knows; maybe his friend did get shot- but when he was shooting the breeze about his slick moves, he always broke into that knowing smile. He was in his element. On the rare occasions when he'd finish a set without hurting himself, he'd walk away like the Fonz, like the essence of cool, with a smile that seemed to say, "keep the change, kid."

I'll never forget the last time I saw Bust-a-Move dance. It was spectacular. Busta was in fine form, as happy as we'd ever seen him. Usually, it took a little bit of goading to get him to bust a move, but not this day. This day was his day. He took to his moves with an uncommon gusto, busting countless headstands, flails, spins, and freezes. A crowd gathered, easily fifty strong, blocking either side of the corridor. My friends and I sat on the benches in the center, mere feet from his gyrating limbs. As the crowd cheered, his moves became more manic, and he began to lose control. He was propping into his tripod headstands, kicking like a mule and falling down, again and again. He was taking spills that would sideline him on any other day, but he just kept going, feeding off of the crowd's energy.

He was getting closer to the windows. Before we could stop him, he propped himself up once more and unleashed a final flailing kick, putting his leg right through the window. Everyone fell silent. Bust-a-move hung there, not knowing what to do, his leg suspended in the window frame. Eventually, he slowly oozed down the wall, slumping into a pile of broken glass, where he laid motionless.

Bust-a-Move was fine, just stunned. The crowd was roaring. He lay in the glass, eyes open, motionless, until a janitor came and helped him up. Nobody's fault. The school would pay for the glass. Bust-a-Move was ushered away.

We didn't see him too much after that, and we could never get him to dance again. "Hey, Bust-a-move! Bust one more move for us!" But no, he always had some excuse, and he couldn't be convinced to give it another shot. I feared that his move-busting days we behind him.

"The doctor said I can't," he told us. "He says I have too much electricity in my heart." Maybe it was true. Years later, I heard that he really did have to wear a heart monitor all the time.

On the last day of school, I was lucky enough to catch Bust-a-Move walking down the corridor. I asked him to sign my yearbook, and he sat down against a wall with a look of deep concentration on his face. He wrote for a good five minutes. "Bust-a-move is writing a novel," I told my friends. I was worried that there wouldn't be room for anyone else to sign.

Finally, he handed my yearbook. He beamed that knowing smile of his, and walked away. This is the total of what he wrote, unaltered, in his own handwriting.

I've only seen Bust-a-Move once since then. I was driving, and he was walking down the street, his shirt folded over his head and tucked behind his neck to expose his bare chest. He had long hair and a look of steely determination. Bust-a-Move couldn't quit. He had too much electricity in his heart.

Note: I told this story, in a much shorter form, on the Something Awful forums in early 2002. Since then, "keep pratce" has become some kind of minor internet catchphrase, but harbor no doubt that this is the true and verifiable origin of the phrase.