"Food fills our belly, but words fill our mind,"
- Reading Instructions for the Mentally Handicapped

Three great authors as well as Brian Herbert and Kevin J. Anderson bring us four powerful and important reviews of fast food. We asked them to write these reviews because we wanted an authoritative and interesting "final word" on fast food items. How can you dispute a literary master's review of a Frosty? The answer is you can't. 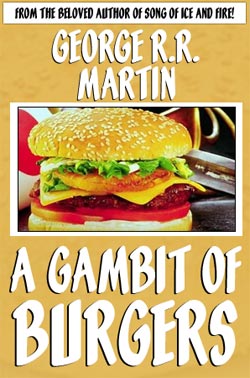 It was the black night of the wild for the Bastard Bear, George Snow, son of Lord Iowen Martin and some base-born scullery maid. The Convocation of Geneva was to be held far away, in the Iron Port where furriers and smiths plied their trade along the River Detroit. The Bastard Bear had been invited as the keynote champion, allied with the House of the Coast Wizards to give a special announcement on the Game of Cards developed by their maesters and based on his own work.

His gray hair was swept by the odorous wind, borne from the alchemical manufactories that cradled the shore of Jersey. He wore a tunic that bore the standard of the Wild Card in red on a black field and Capri trousers of washed denim secured to his ample waist with a belt of boiled leather. On his hands he wore gloves of lobstered steel, fine metalwork bought from the auctions of the Elecc'tronic Bay, and on his head the jaunty cap of the Giants of York.

The stone river flowed swiftly north through the newly made lands beyond Jersey, ruled by no king and left to bastards and brigands. The hunger of a wearying journey along the river tore at George Snow's belly and he prayed to the old gods for some sign. He was near to the point of stopping by the riverside and lighting a cookfire to boil his boots when he spied the signs of lands ruled over by the King of Burger.

George guided his muttering Cavalier from the stone river and saw that the boulevard of dark King Martin Luther met the bustling fastness of Burger. From lanyards hung the caged bones of traitors, picked clean by crows. The shimmering standards of the King of Burger, a golden sun split by the name of the kingdom on a white field, were raised high on iron poles. George Snow hesitated at the entrance and a raven alighted upon his Cavalier's crimson hood.

He rode on, up the winding stone lane and into the stone stable where others had penned their Corollas and Civics. He secured his Cavalier and watered it, but his eyes were drawn to the eerie unwavering torchlight of the castle beyond. His belly gurgled and he hoped that a hearty repast and not the sword awaited him within its walls.

Within the castle of Burger men of Westeros mingled equally with the dark-skinned tribes from the Lands of the Summer Sea. George Snow could plainly see a queue had formed to receive food for coin. He joined the line behind a plump wildling with her ragged children and he found that it took every ounce of his will not to cut them down to hasten his meal.

When, at last, George Snow's turn did come, he paid good coin for the local breaded meat known as the Whopper. It was layered with soft cheese, onions, tomatoes and sauces from far off lands. It yielded to his bite and succulent juices filled his mouth. He washed it down with a large chocolate milk of the puppy, frozen to make it even more delectable. When he was finished he licked the last morsels from its paper wrapping. He was filled, content, and ready for the dangers he might face as he journeyed far into the West.

Five out of five stars. There can be no doubt that the King of Burger is the most benevolent lord of Westeros and his "Whopper" is most delicious. 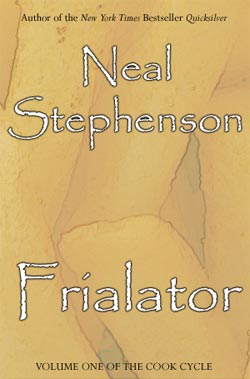 The Incans believed that at the center of each man there were two halves, a dark and light, glued indelibly together by an invisible bond more powerful than any other. The light half embodied the naïf, the protean man, unpolluted by learning or prejudices. The dark half was not something to be feared, the dark half was simply the pragmatist and the learned half. A personification of perfect practicality, it was also a symbol of individuality. It was a man's character.

The Incan man came into the world as light and as he grew old he met and befriended this dark half until he reached adulthood. He became an adult when this light and dark half were permanently and inextricably combined. He was day and night. He was "today" or "yesterday" or "tomorrow" and all it represented. He also had to kill someone to become a man, but that's unrelated.

Enrico Fermi scratched at a mole on his face and accepted the doctoral certificate from the quivering hands of his friend and mentor, Professor Puccianti. A cheer went up from the audience and the newly-titled Doctor Fermi bowed modestly and shuffled from the stage. In truth, he felt conflicted at the piece of paper clutched in his hands. He could sense the strange new world on the horizon, full of potential and terrible at the same time. He wanted to cry out with glee at his achievement. He wanted to throw up from the anxiety.

The darkness was upon Enrico Fermi as he embarked on his quest. The quest took him all over Europe and ended in the United States, where he learned the way of nuclear fission. With the right force the very nucleus at the center of an atom could be made to split apart into two halves. It was a world-changing discovery.

The two halves of the nucleus split apart in his lab at the University of Chicago and two seeds were formed. One would grow a tree of light so bright it would power cities and the other would sprout a mushroom-shaped tree of darkness that would loom over all of mankind. By uniting his halves, Enrico Fermi split the atom and offered two choices for the future of mankind.

Four stars out of five. McDonald's McDLT is as simple and sublime as splitting the atom. One side hot, one side cool. Separate but inseparable. I would like to think that the two Enrico Fermis might have enjoyed the sandwich. 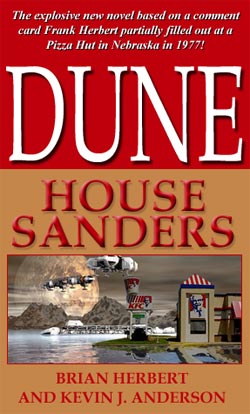 The ghola duplicate of Gurney Halleck stole through space within his personal spice-ship The Yoda 2. Laser beams were fully charged and ready to fire as he activated the cloaking device and approached the Imperial Star Destroyer on which the Tleilaxu were attempting to turn a sandworm into a Tim Hortons with their flesh tanks.

The air was redolent with the earthy spiciness of the spice as Gurney Halleck checked his 5th level Ginaz light saber on his belt. It was ready for action.

“Lock foils in attack position,” Gurney Halleck hissed into the datacom to the cloaked spice ship of the ghola duplicate of Duncan Idaho’s cousin who was named Gabriel.

“We are approaching the target,” replied Gabriel Idaho with his mechanical eyes of Ix.

House Harkonnen Tie Fighters zoomed out from behind the sun with a scream of engines. Maula cannons blasted and raked the invisible spice-ships.

“How can they see us?” Gurney Halleck jinked his craft around trying to avoid bullets.

“I don’t-,” Gabriel’s reply was interrupted by a shower of sparks and a high-pitched squeal. “Ah! They got my Guild Navigator Droid!”

“Here is how we can see you fool!” An evil woman’s voice appeared on their screens. “It was the Bene Gesserit psychics! We can see invisible ships like yours!”

“You may have won that battle,” laughed Gurney Halleck into the microphone with a yell, “but you haven’t seen our secret recipe yet!”

Bursts of flavor erupted from the cannons on the spice-ships and batter-fried extra crispy chicken flew into the mouths of the Bene Gesserit psychics.

“Nooooo!” Screamed Sister Mon Mothma, “the flavors are too delicious and the texture is too crispy! It’s overloading our psychic powers!”

The Imperial Star Destroyer exploded across the sky above them and all who saw it knew that the end of house Corrino was over and at its end.

Five out of five stars it is the best chicken in the galaxy far, far away! Long live the Sanders! 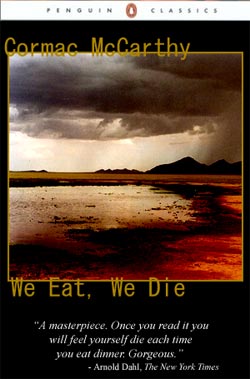 The world slumped around me. Each bite was a meal of dirt and piss. I combed harrowed fingers through it. I crushed it between my teeth.

Was this what makes us or what we make? Steak becomes shit, can shit become steak?

Inside in the dark, down in the liquid stink of snuffed candles and boiling pitch, the food retired to me. It lay inside me heavy and cold. It was plastic mesas made of blue powder licked by the rotten bulb of sun. Dense as lead and half as friendly.

The mass was refried and warmed over, shot through with spilled and curdled cream. Yellow chowder wrung from rotten bracken, lazily polluted with the forlorn green of steam boiled onion. Stewed beef beneath and I forgive you if you took it for the flux. Was it hewn from the shoulder of a cow ten days dead? It was sweet with rot and poor spices.

I tasted it again. Better to have a mouthful of rocksalt, shot from a farmer's gun. Slow fire in that sauce and weak as a tallow candle. We ate and as we did we knew. The verdant days were at our backs and ahead of us was only the agony of the basin. Long nights and quaking ablutions, rings seared black in our mind, curses on our chapped lips.

Two stars out of five. Good value but light on taste.

We hope you enjoyed the masters at work describing their favorite fast foods.