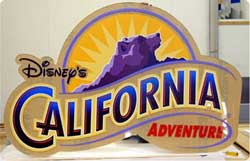 It's a very special day today. As you are probably well aware it's the 6th anniversary of Disney's California Adventure! You've no doubt been marking your calender, counting down the days to the celebration of the year. I'm so excited I can hardly contain myself!

For six years DCA, as it's colloquially known, has delighted millions of people young and old using the rich history of California as a canvas to paint magical images of the golden state. Ugh, give me a second to recover here. I've never been that sarcastic in my life and I think it made me kind of dizzy. It was on this day in 2001 that then CEO Michael Eisner dedicated Anaheim's second gate. He managed to say the following with a straight face.

To All who believe in the power of dreams... welcome. Here we pay tribute to the dreamers of the past... The native people, explorers, immigrants, aviators, entrepreneurs and entertainers who built the Golden State. And we salute a new generation of dreamers who are creating the wonders of tomorrow... From the silver screen to the computer screen... From the fertile farmlands to the far reaches of space. Disney's California Adventure celebrates the richness and the diversity of California... Its land, its people, its spirit and, above all, the dreams that it continues to inspire.

I wonder which secretary wrote that for him. To celebrate this very special day a number of events will be held at the park to commemorate the 6th anniversary. They include:

As you can see it's going to be a very busy day for celebrations at DCA. I think Something Awful is going to be the only publication in the world to even mention California Adventure's 6th anniversary. Disney web sites aren't even talking about it. I don't think Disney itself is acknowledging the anniversary or that the park still exists. How did it ever come to this?

The underlying flaw of the park is that it's about California. The idea was that people who live in California would love to visit a theme park that dramatically depicts the vast and colorful history their state has to offer. Of course, Disney forgot the universal golden rule of life, that is, people hate where they live. It doesn't matter where they live, they will still complain.

If they live in the city they will complain about the traffic, the crime, and the noise. If they live in the suburbs they will complain about the lack of things to do, the lack of excitement, the lack of culture, and that bitch Sue on the homeowner's association who won't let them put a bird house in the tree on their front yard because it'll cause property values to plunge 31 cents. This is strictly a no bird house community! After spending six hours a day in the car commuting to and from work while dodging uninsured illegal aliens, naturally people want to spend their weekend learning about this wonderful state they love so much. The concept didn't exactly make waves.

The other demographic Disney hoped to attract were out of state tourists. The idea here was that instead of visiting California landmarks like Yosemite, San Francisco, and Hollywood separately, they would instead opt to go to California Adventure and get it all out of the way there. What a wonderful idea. Instead of seeing the majestic peaks of the high Sierras in all their glory people would settle for a fake mountain in the shape of a bear. I'm no marketing genius, but I don't think people want to drop three grand on a family vacation to ride a spinning swing ride inside of a giant orange peel. That just screams California! The park never became a draw for out of towners. 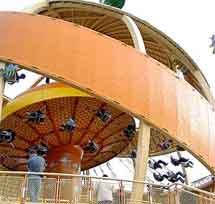 You won't find this at your local county fair! Another poorly executed aspect of the DCA feature set is that it was meant to be a park for the older crowd with more thrill rides and a less "kiddy" theme. They even serve alcohol in the park. Great, a $6 beer to go with absolutely nothing to do. Throughout the park you'll find stay at home and single mothers with a kid in one hand and a glass of wine in the other. Nothing says unhappy alcoholic housewife like being unable to resist the urge to drink with your kid at a theme park.

Really, if you ever find yourself in this house of horrors stop to watch the women sitting with their kids at the place that serves wine. The expressions on their faces are worth the price of admission alone. If you like to watch depressed women stuck with kids with no opportunity for advancement left in life, with their youth draining away with each screech of their bastard child, this is the place to go.

So who exactly was the park for then? Nobody knows for sure. It's like asking, why did the druids build Stonehenge? Experts (fat guys with computers who troll Disney newsgroups) hypothesize that Disney park planners wanted to concentrate less on attractions and more on shopping and dining, uhm, you know, like a mall. Disney parks aren't exactly known for their quality dining experience. Kids barely able to contain themselves in excitement don't mark up park maps days before their trip with the restaurants and shops they want to visit. "Oh, I can't wait until I get to go to Disneyland! First I'm gonna eat a $8 hamburger and then I'm gonna get a churro and then I'm gonna buy like 14 of those glow rings!" People go for the rides! That's the hook. Just remember the line from the oft-quoted Kevin Costner film, "Dry land is not just our destination, it is our destiny!"

The most amazing thing about all of this is that the park doesn't even do the California theme justice. The "history" the park claims to inspire visitors with is contained in a 20 minute film hosted by a time traveling Whoopi Goldberg. The rest of the park is a bastardized version of California filled with bad puns.

Oh God the puns, the horrible, horrible puns. The park is riddled with them. It's like they turned GBS into a theme park. You'll see signs that say "Bear left" with an arrow and a bear because YOU'RE IN BEAR COUNTRY NOW. Test pilot turns into "taste pilot". Burbank Ice Cream turns into "Bur-r-r-r Bank Ice Cream". The Hollywood section has an "Award Wieners". There's even a place that sells shakes called San Andreas Shakes, based on the fault line that is responsible for the traumatizing earthquakes that haunt my dreams. Puns are the second lowest form of comedy right behind anything I've written for this site. 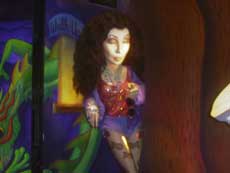 Oh hey it's Cher. Now that's Disney magic! The park's reliance on C-grade celebrities within the Disney/ABC family is disgusting. Instead of seeing Goofy and Donald Duck you'll find the likes of Rosie O’Donnell and Colin Mochrie sharing hosting duties in a bread baking exhibit. The world of sourdough bread is just that exciting I know. Better buy an annual pass so I can see this yeast rising action again and again!

However, none of that compares to the horror that was Superstar Limo, the worst theme park attraction ever built. The idea was that you are a celebrity just getting off a plane in Los Angeles and have to be rushed to Hollywood. Along the way you see celebrities like an animatronic Tim Allen and the real Joan Rivers (she really needed the money). If I don't want to see them on TV why do I want to see them in a theme park ride? The ride lasted less than a year. Much like everything else in the park the cost cutting cheapness was embarrassingly blatant.

Despite these criticisms California Adventure continues to enjoy relatively high attendance. Attendance for DCA topped out at nearly 6 million in 2005, making it the 7th most visited theme park in North America and 12th in the world. These are numbers other Southern California parks would kill for. I guess sitting across from the greatest theme park in the world has its advantages. Even Nara Dreamland would be successful if it were sitting across from Disneyland and more fun than DCA even if those annoying people in the photos were there.

But when you break the numbers down DCA's attendance isn't all that impressive. It's actually just six guys who have annual passports that go over and over again. In fact many of the guests (Disney-speak for suckers) that visit DCA get in for free. That's right, even when they tack on admission for DCA to Disneyland tickets they can't match the 14 million visitors that Disneyland attracts. When offered California Adventure for free many resort visitors say, "You know, I'd rather not." What? You don't believe in the power of Californian dreams?! You... monster.

There is an urban legend about a man who bought a 1-day, 1-park ticket to California Adventure. They say his ghost walks the park every night after closing looking for his lost soul. Many say they have seen him in the park after dark while others deny that anybody has ever purchased a ticket to just DCA. The legends persist to this day...

California Adventure sits on the former site of the fabled Disneyland parking lot. Once a beautiful and awe-inspiring parking lot, its corpse now lies below a horrible theme park. Gone are the days of not knowing where the hell your car is after walking around for 18 hours in a 40 year old tourist trap and desperately wanting nothing more than to go home and jerk off in peace after your wife and kids go to sleep. So how does DCA compare to the 100 acre parking lot it replaced? Let's break it down.

As you can see the parking lot is the clear winner here.

Since many of those responsible for California Adventure have since left the company current management is left with the impossible task of fixing the park. Attractions such as the Tower of Terror, A Bug's Land, and Monsters Inc., all of which have absolutely nothing to do with California, are like a band-aid on a terminal patient. Disney recently announced Toy Story Mania!, which is currently being built at DCA, and rumors persist of an attraction based on Cars being added as well, turning the place into a sort of "Pixarland".

The end result has become a hilarious ironic twist, spending millions fixing a park that was built on the cheap to save money. Had they just dropped $3 billion on a park like Imagineering wanted to do they'd have one of the top 3 visited theme parks in the world on their hands. It's that kind of short-sightedness that has plagued the Disney company for the last decade.

That is why today we honor the man responsible for getting DCA built, Michael Eisner, who had the courage of his convictions to say, build it for less.