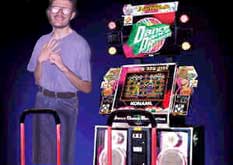 The erosion of this man's dignity just started with a genetic disorder, now that he's playing DDR it's about to kick into overdrive!More than two years ago a brutal storm of utter gayness swept into arcades across the nation. It was a tornado of idiocy unparalleled in time, or at least the most hideous thing to be squeezed out of the bowls of the arcade industry since that Sega holographic cowboy game. I am of course referring to "Dance Dance Revolution" and its unnumbered horde of imitator games. Following in the proud tradition of the Nintendo Power Pad, Dance Dance Revolution seemed at the time to be a terrible fluke. I stood aghast, watching nerds of all shapes and sizes pounding their pasty feet back and forth while hideous Japanese techno-pop spewed into the arcade. Despite my stunned disbelief I was witnessing the birth of a new and truly despicable genre of video gaming. I was watching the creation of the Dignity Destroyer genre.

Basically the concept of DDR plays on a nerd's low self-esteem, inviting them to compete in a way that fuses basic athletic skill with nerd hyper twitch coordination. Even the best players, who would normally be cheering a victory in Tekken 4 or some other competitive fighting game, are still humiliated by the prancing, flailing, and general lunacy that transpires during a game of DDR. You know how playing Dungeons and Dragons stunts your sexual development horribly? Whatever Dungeons and Dragons does to male sexual development is dwarfed by the virginity prolonging powers of Dance Dance Revolution.

The Dignity Destroyer genre did not die with the first version of DDR, it did not wither and get ignored by arcade-goers who finally realized how monumentally dumb they looked hopping around in front of a squealing animated Japanese woman. Instead it thrived, and spawned several new versions of Dance Dance Revolution as well as a number of competing arcade games. These games range from dancing to playing fake drums to playing the maracas. They might as well be called things like "Blowjob Prevention" and "Headed to the Prom with Mom" for all the damage they do to a teen's sex-life. Not to mention the divorces caused by adult men (and some women) playing DDR in front of their loved ones, their bodies convulsing grotesquely to the tune of an N'Sync song.

With two years gone by Dance Dance Revolution and its mutant hybrid offspring are continuing to suck up quarters in arcades throughout America. Since Something Awful's main goal it to cater to the whims of a gaming public gone mad with dancing, we have researched and compiled a list of the five most promising upcoming Dignity Destroyer games. Count them down with us, and let's hope you've got new orthopedic insoles in your shoes you hobbling drool-bucket, because these games are going to make you sweat your cerebral palsy off!

Concept: This ship is in high seas, can you keep your footing?! Swaying Boat Megamix combines the exciting gameplay of remaining upright on a ship cresting over large swells with the pounding beat of The Crystal Method remixing some 12 nautical-themed songs from the 1920s and 30s.

Gameplay: The game is played by placing your feet on the "deck" which consists of a moving hydraulic pad that synchronizes to the onscreen swaying of the HMS Queen Funtoria. While you try to keep your balance you will be required to spasm and writhe to the musical beat and the onscreen instruction from "Captain Rhyme and Rock", a talking turtle in a sea captain's uniform. If you fail to complete a level with a "good" or "excellent" rating, the game will end and you will be treated to an animation of an anthropomorphic iceberg devouring the HMS Queen Funtoria.

Concept: Rock out with the band in the high-stakes musical world of triangle playing. Attempt to synch up your triangle skills with over twenty tracks that range from R&B to Goa Terrorcore Techstep.

Gameplay: Using only your hands, mind, and the innovative magic triangle interface, you will be challenged on 22 stages of musical mayhem. Each stage has up to five triangle strikes that must be carefully timed. Do you have the patience to wait out a three minute "girl, I really gotta tell you…" rant by Boyz II Men? Can you even hear the triangle over the wailing distortion of Nirvana? Don't worry, the onscreen Triangle Tutor will tell you exactly when to strike your triangle by flashing a photograph of a skinned human head on the screen and emitting a half-second shriek loud enough to render dolphins incontinent.

MMD4OB is set to be one of the hottest titles in the 2003 lineup.

Concept: Japan's hottest arcade sensation is here at last! Plunge hands-first into the mixing challenge, as you kneed and twist a two pound lump of dough for the mini-bakery immediately adjacent to the arcade. A baking tutor named Chef Raps-It will guide you onscreen, making whimsical cracks as sped-up calliope music plays.

Gameplay: Good old Chef Raps-It has an eye on quality control, taking into account air-pockets in the dough, fecal contamination, or inability to properly mix in additional ingredients. If you fail to satisfy this discerning chef the "Bakery Drawer" will close, severing your hands and ejecting your worthless wad of bread dough onto your shoes. As an added bonus you will be forced to eat a portion of whatever you make, even if your hands are severed!

Concept: Rappin' Pirate and Buccaneer Cool Crimsonbeard has challenged you to a match of derring do. He will belt out eight different original songs and you have to stop his swords from stabbing you in the lower body by grabbing them when a specific sword flashes on screen. This game is fun for children of all ages and involves a particularly high level of retarded flailing as you try to avoid the deadly stabs of these razor-edged sabers.

Gameplay: While Cool Crimsonbeard sings his songs he will flash the icon for different swords on the screen, there are sixteen swords total and you have to grab the blade of the one he is about to try to stab you with and hold it still with your hand. This may cause some minor slicing and slight finger amputation, but it is more than offset by the fast paced fun! 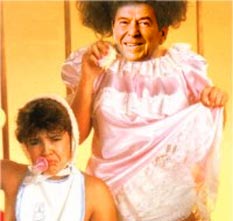 The President's dignity has been kidnapped by ninjas, are you a bad enough dancer to save it?

Concept: Ronald Reagan is at it again! This time he needs your help and fancy footwork to clean up this mess he has made in his adult diaper! His mentally crippling Alzheimer's disease has left him petulant and wallowing in his own filth, barely able to tell the difference between night and day or recognize family members. Your dancing is the only thing that can help him clean up his act now!

Gameplay: For commander-in-chief Ronald Reagan's mental capacity has dropped to near-infant levels, causing him to soil his diaper on 24 incredible stages. These stages consist of 10 stage pairs and four bonus stages. Each stage pair is a "number one mix" in which you have to change a urine-soaked diaper, followed by a "number two mix" with increased speed and difficulty and a much more troublesome feces filled diaper. Even more difficulty is added in the four bonus stages! Ronnie's sassy dancing wife Nancy will emerge on screen and begin dancing along with you, occasionally changing the routine without warning.

The five titles we have selected for our round up here are just some of the more than 15 upcoming Dignity Destroyer games headed for an arcade near you. They were selected based on their originality and innovative ability to destroy your dignity faster than any of their forerunners. Rumor has it that 2004 will be even more incredible, with new games from Konami that include a game in which you have to clean the hoofs of a horse with your tongue and a game that features dancing naked at gun point for the amusement of a 12 year old.

Our TruthMedia section has produced another flame mail magnet in the form of our recent review of Final Fantasy X. In case you're not "in the know" or don't have the "411" about TruthMedia reviews, they are designed as flame bait to enrage overzealous fans of the various topics. This week's flame mail round up is virtually overflowing with hatred for the author of the Final Fantasy X piece. 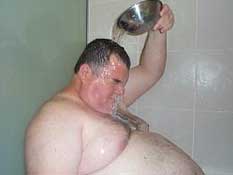 I HATE YOU'RE SITE now, and unless you APOLOGIZE for this review, I will warn people to NEVER LOOK AT ANY FUCKING THING on your site again. Love these games I have, and I won't stand for this bullshit. Something Awful is damn right, cause thats what the fuck this 'review' is. AWFUL!

OH NO! THIS SITE TRULY IS SOMETHING AWFUL! I've heard it five million times, and each time it only hurts more than the last. So share our pain at these vicious remarks and check out the latest truth media mailbag!