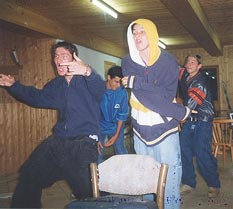 I am told that this is what "gangstas" look like. I don't know if I buy it, these guys are wearing more shirts than I'm used to seeing on gangstas.I have mentioned in about fifty thousand articles that I live in the good city of Chicago, a thriving metropolis somewhere in the Midwest, Indiana or Iowa or something. It's a great place, and having lived here before I knew about many of the idiosyncrasies of big city life. One thing you can expect to see is lots of homeless people, particularly ones who are missing limbs. In Ohio what few homeless people you saw walking around, even in the larger cities, tended to have all of their limbs intact. Something about Chicago just eats up homeless people's limbs, maybe it's a serial limb thief named the Limb Strangler, maybe it's a pack of dogs with a taste for human flesh. Whatever it is, there is a scourge of the homeless on the prowl and it is taking their limbs.

When I first moved here I was told by my AOL girlfriend Michelle that our neighborhood had "improved a whole lot in the last six years". She told me a number of encouraging stories about sub machineguns being fired in the alley behind our apartment, about prostitutes fixing their makeup in the mirrors of parked cars, possibly tales of toddlers walking around unsupervised while on fire or something equally negligent and apocalyptic. Then she said it had all changed, that things were hunky-dory here in the neighborhood nowadays. The crackhouses had burned down, the hookers had been turned into mailboxes or something, and the sub machineguns were sold to the agents of International terrorism.

That's what her story was anyway. I guess her plan was to make her neighborhood's past sound like a war zone and then when I moved in and realized that people weren't actually shooting at me, just near me, I wouldn't freak out as much. Needless to say when I experienced my first local gunplay about a week ago I was not put at ease by the concept that the neighborhood was improving. 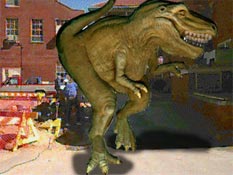 Well, at least this guy may have at one point cut back on the feral stray cat population!It was about one in the morning on a Friday and we were both sitting in the living room when I heard two loud bangs from outside. I walked out onto the balcony and heard yelling a few houses down the street. There was a car stopped in the middle of the road and the occupants of the car were yelling at a shirtless man. Naturally the thought of gunfire never entered my corn fed brain, because why the hell would someone be continuing a yelling match even after shots had been fired? I lean over the balcony and watch like an idiot, the yelling escalates and then the shooting starts. About a half-dozen shots are fired as we both duck back into the apartment and crouch below the window level just in case.

Oddly enough I wasn't scared, and that's really weird when you consider my heart rate jumps to about 200 when I see one of those damned centipedes. We called the cops and that sent the yelling shirtless guy running when they showed up about three minutes later, although it was likely they had been notified of the incident well before we called it in. I doubt the cops caught him but maybe they did, I don't really care.

A few weeks before this a fight broke out on the street over a prostitute. That's right, two men were fist-fighting loudly over a prostitute. It was probably a pimp vs. boyfriend situation, but who knows, at this point I'm trying to apply things I picked up in movies and apply them to things happening in the real world. I assumed the boyfriend was a Richard Gere-type saving his fat-version-of-Julia Roberts girlfriend with his powerful right-hook instead of a shitload of money.

What I have been wondering recently is if this is what the neighborhood is like now, what was it really like before? I trust Michelle, so I believe her when she told me that things have improved, but this is definitely the most dangerous neighborhood I have personally ever lived in. To determine what the neighborhood might have been like in an even more dangerous past, I put together a list of criminal and questionable events that I've witnessed and scaled them up for danger. Hopefully this compare and contrast will allay my fears that the neighborhood is actually on the path to becoming Chicago's version of Beirut.

That was therapeutic! I now realize that this neighborhood really is not the hell on earth I thought it to be when I first sat down to write this article. I see that things could and probably were much worse, and I appreciate the greatly decreased number of vampire car thefts and dinosaur attacks that now occur in this neighborhood. Heck, while writing this article only two of my windows were broken out by hand grenades, and only one of the grenades even exploded! These are odds I can live with!

This Friday Livestock has put together a very special collection of Photosohop themes from the forums. Unlike those wacky "look back" episodes of TV shows that are really just reruns, this is all previously unseen material! Buckle your seatbelts baby, because this is about to rock your socks right off your head! 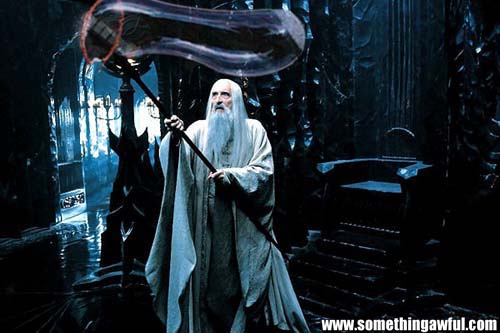 Themes this week include "Classic Christian Albums", "Yearbook Photos", "Lord of the Rings", and the finale of Admiral Ackbar in Photoshop Phriday!! You will be glued to your seat, but at the same time you will be glued only to the edge of your seat! CHECK IT OUT!