A Tribute to an Unappreciated Artist: The Goth Poet 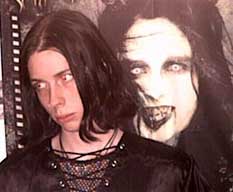 The pain... the suffering... NONE OF YOU COULD POSSIBLY UNDERSTAND!!!

We here in the sunny Something Awful Headquarters (we repeatedly mistake "glowing with radiation" as being "sunny") believe that there are a lot of undiscovered artists out there just waiting for the praise and appreciation they so richly deserve. For example, we feel that talented, unknown musicians such as this little obscure group from Charlottesville, Virginia named "The Dave Matthews Band" should get a whole bunch of radio airtime, MTV press coverage, big money concerts, and ultimately have all their throats torn out by rabid wolves. Then we should fill their corpses with cans of ravioli and ship them over to some starving, war-torn, ninth-world nation whose main national export is dust storms. While we're at it, let's also ship off Phish, Blue's Traveller, and whatever remaining chunks of The Grateful Dead that haven't already decomposed. Oh yeah, let's additionally get rid of The Insane Clown Posse and all their retarded fans. This could be easily accomplished by simply launching every Blockbuster Video and used automotive parts store where they work and hang out into the sun.

Alas, I am getting off topic here and this disturbs me greatly because today's column is meant to herald and glorify the unappreciated artists of the Internet, the Goth Poet, a being whose entire existence revolves around entertaining friends and foes alike with their unintentionally amusing poetry. Before we launch into our tribute, let's take a look at the hero, the legend, the laughingstock, and examine what defines a Goth Poet.

What Is a Goth Poet?

A "Goth Poet" is any individual who chooses to express themselves with bitter, pity-filled, clichéd poetry that always ends on a happy note (they kill themselves and therefore are not able to create more poetry). While many prevalent goth poets of this day and age (BlackWraiven, BlackSpectre, BlackShadow, BlackBlackBlack, BlackWhiteness) are inspired by recent media works such as "The Crow," Marilyn Manson, and "Three's Company" (John Ritter is a closet goth), the art of goth poetry dates back to ancient prehistoric days. A recent French excavation revealed a surprising amount of Goth Poetry in Dig Site #666, a black cave with a single white teardrop inscribed on the outer wall. The earliest example of this art is credited to a cavegoth known simply as "Log": 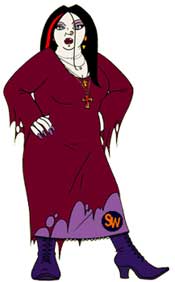 A cartoon image of what appears to be a retarded witch character from Scooby Doo.

Who Is a Goth Poet?

Goth Poets can take any size, shape, and form, but only if that size, shape, and form resembles that of a very skinny / very fat, pasty, acne-ridden teenager wearing a black concert t-shirt. Nearly 99% of goth poets are white suburban children, as minorities have a tough time being goth because they're not nearly retarded enough. If you are a minority and wish to be goth, you must become homosexual as well, as there aren't any heterosexual goth minority positions available at the time.

Why Are People Goth Poets?

There are many reasons to become a Goth Poet, ranging from "because people don't understand how complex and deep you are" to "handicapped children routinely beat the shit out of you because they don't understand how complex and deep you are." Nationwide studies have repeatedly demonstrated that goths are 110%-190% more intelligent than the average person, at least according to them. As a result, these incredibly talented and smart individuals choose to display how incredibly talented and smart they are by wearing clothing which makes them look incredibly untalented and stupid. This is how you and I are able to distinguish goth poets from surrounding non-suicidal people in a crowd, assuming somebody actually found a way to trick them into entering an area containing more than three people, all of whom are waiting in line to purchase beef jerky.

These selfless artists have devoted their entire lives to writing the most unintentionally hilarious poetry ever so the rest of us may be amused and know that no matter how crappy our lives may become, we will never be as pathetic as they. You could lose your job, have your wife walk out on you, watch your house burn down, and then be stabbed 13 times by a homeless man who's screaming at a stopsign, but as you lay bleeding in a corner of a filthy abandoned alleyway, you can safely say, "at least I'm not a Goth Poet."

Now that we know a bit more about this mysterious and enchanting group of people, let's move on to our tribute to Goth Poets. Without further ado, I present to you some of the finest Goth Poetry, written by "King Don" (also known as "Adam Veatch"). Although his Geocities page does not reveal too much personal information about this troubling and complex man, we can pretty much assume that he is undoubtedly one of the more refined and experienced Goth Poets floating around the Internet, as he proudly lists such remarkably astounding projects he is currently working on: 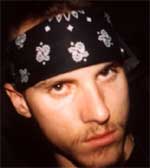 I am working on a Reality Manuscript. I cannot explain too much of my theories of anti-reality because I do not wish to scare you. Although on theories now, I have found evidence which backs my claim that we (as a populations) are not here on this planet. This manuscript will include dream theories and the my version of the origin of human kind.

No really King Don, please don't try to explain! Our collective heads would explode ala "Scanners" if we attempted to understand your deep and meaningful research into why none of us are currently living on this planet! Besides, it'd just restate what I already know; the US Government secretly shipped us all off to the moon hundreds of years ago and are currently colonizing Earth with tiny replicas of the robot from "Small Wonder" which are able to pick up entire sofas and twirl them around as if they were really tiny hot dogs! And to think the UN laughed me off the stage!

To show our support for world-renowned Goth Poet "King Don" / Adam Veatch, Emily "Integral" and I, Rich "Lowtax" Kyanka, will read a select few poems written by this distinguished gentleman and thereby hope to immortalize him in the popular form of "recorded word" media which has helped launch the careers of such people as "Fats" Domino and "Stephen" Hawking.

"Black Is..." explores the deep psychological meanings behind the color black, which apparently ranges from "the color of a hobgoblin's lips" to "the color of your spine, which I'm going to bend." Are many goths chiropractors, or are many chiropractors goths? This is a question we may never know, probably because nobody gives a flying fuck.

On one hand there is a beautiful weed. On the other is a terrible rose. Who will win this never-ending horticultural battle between plant heavyweights? Even after reading the poem I'm still not sure, mainly because Emily kept "accidentally" dropping stuff while I was recording and claiming she didn't mean to. She's apparently trying to ruin my readings of goth poetry because she's jealous of my melodious voice. Did you know that I was once offered the job of the guy who says "this is CNN" on CNN? You probably didn't because I just made it up. Regardless, Emily isn't going to get away with screwing up my goth poetry readings.

Rain is man's mortal enemy, foiling our fiendish plans at every opportunity! It's no wonder that King Don chose this topic to tackle, as rain resembles the tears of a clown or perhaps the tears of a goth after he's had a bag of potatoes shoved up his ass. Our favorite lyrics would have to include "Rain is wet," followed by "No matter what the "fuck" you say." I'm not exactly sure what this means or why it means it, but I really hope it stops meaning it in the near future.

We have absolutely no idea what this poem means or why anybody would willingly write it. Our best guess is blackmail. We think this poem is about driving and stealing things and then crashing and dying, but it could be about anything else. That idiot Rich kept bugging me throughout the poem, I suppose in retaliation for when I dropped things during his reading. Ah well, I'm getting the last laugh here anyway. I've been using his toothbrush to clean the cat's litterbox for the past three months.

We hope our little tribute to the wonderful world of Goth Poetry has enlightened your feeble little minds and exposed you to a rich culture which you would otherwise callously mock and make fun of before we had a chance to. Remember that although goths may be different than us and choose to dress and speak in ways that we would deem "stupid," they are far more intelligent than we could ever comprehend. God bless you, noble Goth Poets around the globe! 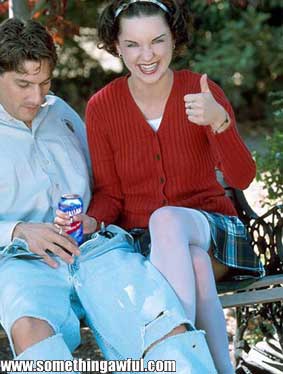