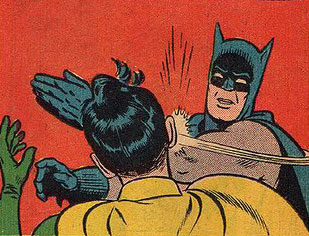 Tragedy struck earlier this year when a laser-guided karma missile veered off course, missing Mary-Kate Olsen's New York apartment by mere feet and taking the life of Heath Ledger, who had by all accounts been a terrific guy that never inflicted pain upon another soul through the release of direct-to-DVD movies about ponies and fashion.

As the news of Ledger's death spread, most people felt pretty bummed out that a nice young guy with a lot of talent had lost his life. A few dozen jerks took a break from their full time jobs of dying bitter and alone to proclaim that this was their kind and just God's way of punishing the actor for his role in Brokeback Mountain. Most disturbing of all, however, were the neckbeards whose immediate concern was the effect that Ledger's death would have on the production of The Dark Knight.

Their nasally-voiced concerns were quelled by an announcement that Ledger had already completed his work as the Joker in principal photography, and that the tragedy would have no impact on post-production. After catching an early screening of the film, however, I think that actor's death presented more problems than the studio let on.

Don't get me wrong, The Dark Knight is fantastic. For two hours it had me enthralled, temporarily forgetting the Mamma Mia! mania that had captivated my soul and the imaginations of audiences worldwide. The moving tale of a young woman's Abba-themed wedding and the three men that simultaneously pumped her carefree and independant mother full of semen regained control of my life when The Dark Knight's end credits rolled, of course, but providing a momentary distraction from such a cultural phenomenon is quite an achievement.

That said, there were a few details in the movie that seemed... peculiar. It's entirely possible that these were simply artistic decisions that had been planned from the beginning, but the cynic in me wonders if they were last-minute fixes for scenes that Heath Ledger had not been able to film.

After the Joker delivers his first line of dialogue, he relaxes while someone off-camera says, "Great audition, perfect! This screen test is pretty much just a formality."

On several occasions, Brandon Lee's stunt double stands in as The Joker, wearing the same costume and makeup that he wore in The Crow.

During one of the Joker's lenghier monologues, the frame clearly pauses (note the screen's jumpiness and a pause icon in the top right corner) as Heath Ledger's voice is replaced mid-sentence by Morgan Freeman's impersonation of the Joker.

Every shot of the Joker concludes in slow motion with a fade to black and somber violin music.

At one point, Commissioner Gordon runs into his office and snatches up the red phone on his desk. "Batman," he gasps, "the Joker has taken over a Gotham Transit zeppelin and is heading straight toward Wayne Tower! Hurry!"

Dramatic music swells as an establishing shot from the steet level pans up toward a zeppelin weaving through Gotham's skyscrapers. A cloud of bodies and dollar bills spill out from the aircraft, raining down on the city below. The camera begins to ascend, getting closer and closer to the blimp.

Commissioner Gordon, now wearing a different jacket and absently pulling at the corner of a longer mustache, picks up the red phone again. "Never mind that Joker situation, we just got a call that someone's bicycle got stolen. Hurry!"

Christian Bale is visibly ashamed in one profile shot as he converses face-to-face with the Joker, who suddenly resembles director Christopher Nolan's hand with a coat of white paint topped off by a tiny green wig.

At one point, the Joker is being treated at the Arkham Asylum. His doctor explains that part of his neurosis comes from sleep depravation, and that he has something that will help. Just as the doctor produces a bottle of pills from his coat pocket and begins to hand them over, the scene abruptly ends.

During a daring bank robbery, the Joker morphs into a CGI werewolf and fights a dragon.

The entire second act of the film consists of Batman finding notes left by the Joker telling the hero to meet him at various locations, followed by Batman showing up and realizing he's been stood up.

The Joker's theme music, originally reported to be a swelling and eclectic Danny Elfman tune, is "Time Of Your Life" by Green Day.

The film's climactic battle sequence between Batman and the Joker is just a loop of Batman falling down a flight of stairs that lasts for twelve minutes, occasionally interspersed with a brief clip of the Joker laughing in the jail scene from earlier in the film. This fight ends with an abrupt cut of Batman kicking the Joker over a previously unseen waterfall at a different time of day.

After the Joker cleverly escapes death and establishes his imminent return in the next Batman film, a claymation model of the villain steps into a bear trap and screams for several minutes as it bleeds to death.