Last week while I was posting on the SA forums, swapping carrot cake recipes with some goons, an individual asked if I could do an update about what it’s like writing comedy updates. This was a terrible idea and I reported him to the administrators to be tracked and banned at a later date. But later on as I soaked my horrible, ruddy body in the tin washtub in my garage, I realized that with enough guff and high-grade coffee, I just might be able to pull this crazy idea off. People are always emailing me asking how I am able to write these comedy updates every single week, and are given hope in their own aspirations as Internet writers by my simply atrocious writing. If perchance I can help some poor souls who are looking to express themselves in ways other than egging houses and starting fires, than why not give them a boost? Perhaps I can be of service for once, or at the very least, reduce the frequency of egg and fire attacks on my home every night. 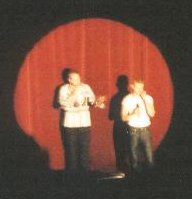 Internet comedy is just like stand up comedy, but without the live audience, stage, free pretzels, fame, and respect.

Writing a comedy update is just like learning to ride a bike. You start off slow, learning as you go. Then after awhile you pick up speed and maybe even do a couple tricks. As you grow more confident, you will start to grow cocky and careless, doing crazy tricks up and down the street with a baseball card in your spokes and your hat on backwards. Then one day your showboating will catch up with you and you'll eventfully fall into a sinkhole and break both your legs. The important part about this analogy is that you must pick yourself up, dust yourself off, and get back on that bike. Of course you won't be able to peddle because both your legs well be crushed from the fall, but if you can fashion a makeshift sail to rig on the back of your bike you might be able to make 6 knots with a healthy gust of wind at your back. Hopefully you have a good insurance plan and while you recoup in the hospital, go over what you did wrong and learn from your mistakes. Then you will go into a coma and die, just like Hillary Swank at the end of Million Dollar Baby.

I know what you are saying to yourselves, "Hey Frolixo, this doesn't make any sense. Why do you suck and why am I reading this crap?" Please save all your questions until the end of the update, and bear with me for a moment while I go more in depth the creative process of writing an Internet comedy update. If you stick it out the whole way, then you will reap the rewards of knowledge beyond your wildest imagination. It’s getting hot in here, so take off all your clothes. 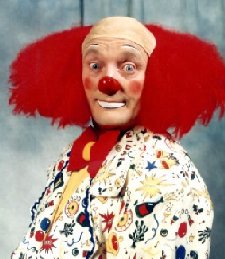 I don't see you laughing. This displeases my bodyguard, Peanuts.

Inspirations: Every good comedian knows that a piece of comedy or idea can come from some very unlikely sources. Most people would think logically about this, and watch funny movies, eat a bunch of silly string, and ramble into a tape recorder for some "wacky" ideas. This is wrong. Comedy is most commonly found in places of pain and suffering, such as Wal-Mart, monster truck rallies, gun and knife shows, and petting zoos. My favorite is the petting zoo because I like to let the goats chew on my shirt cuffs, leaving grassy green stains that I can spend my evenings cleaning with a stain removing stick. Pigs are always inherently funny because they're so strange looking and confused, especially if you shoot bottle rockets at them and feed them jawbreakers. Another favorite venue that gets my sauce sizzling for a comedy update is the circus. The smell of cabbage, old feet, and elephant dander permeate the thick circus atmosphere as men with mullets wearing Styx concert shirts chug beer and hope to see a trapeze accident, while their Mongoloid children roll around in the hay like dogs. Creating laughter comes at a grave price, namely your sanity and even your very soul. If any of you want to walk out now, there's the door. I won't think any less of you.

Attitude: There is a saying in the comedy business: If you got it, flaunt it sister! I am confident in my appearance and affability and this carries through to my work. Before every update I look into the mirror and tease my locks and bat my eyelashes. Sometimes I'll get jealous and punch the mirror, causing me to bleed all over my mattress and perform drunken Tai-Chi on my cat. Taking drugs may also help your funny bone. I don't condone the use of narcotics or steroids in comedy work, but fully support the still legal supplements that bulk up the portions of your brain that you use most for jokes and oddly enough, curling. The multiple senate hearings on illegal drugs being used by comedians have put great strains on the community, and after Carrot Top was expelled last year, everybody is starting to take it seriously. Finally, the best way to keep a good attitude for comedy is colonics. I recommend 2 flushes daily.

Animated Gifs: When your comedy update needs that extra punch, or you want people to be distracted from the actual writing, it’s always a good idea to put on some animated .gifs that are pleasing to the eyes. Some people may turn up their noses and look at this as lowbrow entertainment, but they are lying if they say they weren’t mesmerized by the dancing squirrel and could barely bring themselves to look away. You can only hope that by the end of the update they forgot what they just read and have a goofy smile with a string of spittle hanging off their chin. Oh wait, that’s what a regular SA reader looks like anyway. News flash, you just got owned son. 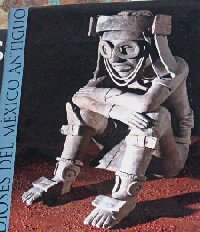 Fragmaster was once a Mayan high priest but was transported to our time through a wormhole.

Kevin "Fragmaster" Bowen: The tale of Kevin “Fragmaster” Bowen is a true Cinderella story. He escaped oppression at the hands of the giant cockroach overlords in his homeland of Boliva, and moved to America to become one of the premiere sandwich artists at Subway. After making a particularly funny sandwich for Mr. Richard “Lowtax” Kyanka, he was hired on the spot to write comedy for the blooming Internet industry. Little did he know this would mostly consist of cleaning Lowtax’s house and mowing his lawn, but he persevered and in the end became one of the top Internet comedians on the planet. Now that he has hit the big time, he wields his satire like a whip, and is undisputed in saying funny things in a falsetto. After his Fireman Comics propelled him to the top of the charts, he consolidated his power into a empire of chuckles, and ruled the Internet comedy world with an iron, albeit weak-wristed, fist. If you want to make it in this business, you better stay on the good side of Mr. Bowen, becase he calls the shots around here. Make sure he knows who you are and remembers your name. You know what that means: handjobs, and lots of them.

Plagiarism: They often say that imitation is the best form of flattery. It's also the best form of being really lazy and uninspired. That’s why for years I just copied Ben "Greasnin" Platt's updates and used them as my own when I didn't feel like writing, or when the Cosby Mysteries was on the Family Channel. Now that he has stopped writing, I'm in a bit of a pickle and for my last couple updates I just copied and pasted some online PDFs detailing small aircraft motor assembly. So far nobody has been the wiser. I do not recommend this method of comedy writing, unless you are desperate and have no sense of worth/value like myself.

Webcomics: These are the pinnacle of Internet humor. Even the legend, Kevin “Fragmaster” Bowen, got big making webcomics. I myself dabble in the arcane craft, and have a couple series in the works. Most notably Hitler Dog, but I also make one called the Pepperidge Piglet that is a hit with audiences in the 4-7 age group. Here's my latest that covers today's topic!

What did we learn today from the Pepperidge Piglet's grand adventure? You should always keep an eye out for strangers and recite your scripture everyday. Poor Kindly Farmer found out the hard way that plowing a field all day can go to your head. Hahahahaha oh man my balls hurt.

Well, I hope you learned a lot today, and I hope to see some of your comedy submissions soon. Send them to Corin Tuckers Stalker and he will read the thousands of e-mails and answer every single one of them with detailed constructive criticism and mspaint pictures of walruses. What a great guy.