The Secret of the Elitist Internet Nerd 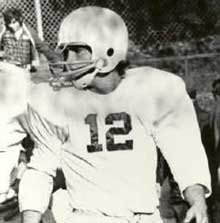 After he wins the big game and fucks a couple of cheerleaders he is going to kick your ass in Halo 2!There is a stereotypical view that people who use the Internet and play video games are pasty white nerds that sit hunched over their computer keyboards triumphantly hitting a submit button every five minutes in order to send an emotionally charged essay on why the upcoming PSP will suck donkey balls and that the Nintendo DS is the best thing since the invention of the Fleshlight (or vice versa) to a message board for other pasty white nerds to read and get angry about even though the message board is actually about lemonade stands and lemonade related discussion. This stereotype is pretty much true. 90 percent of all Internet forum communication is about why one form of entertainment is better than someone else’s form of entertainment.

Don’t kid yourselves. The Internet has nothing to do with spreading knowledge or learning new things in order to better our lives. More often than not it’s a dick waving contest to see who can be the most insane about video games, movies, or television shows. Do you like games designed by id software? Well, there’s a guy out there who likes games designed by Valve software and he’s living a lie! It’s up to you to find that person and berate them into enjoying id software games because for all he knows he has no idea what kind of video games he likes!

Did you absolutely hate Doom 3? There’s a message board out there full of people discussing Doom 3 and how great it is and it’s up to you to find that message board and call everyone on it a faggot. Hey, last night I spent an hour on a message board dedicated to parrots telling everybody how much parrots suck ass and how much the people who post there suck ass and told them all to suck my fucking ass because I hate parrots and cockatiels are the fucking bomb. Don’t look at me that way. I was just using the Internet for its intended purpose! 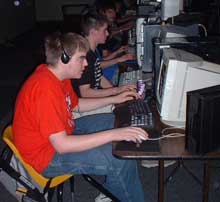 After he takes his ear medicine and explains why Final Fantasy VIII was better than Final Fantasy VII to a bunch of “little newbs” he is going to kick your ass at Digimon!You’ve all heard of the Halo series. I thought Halo was among the most popular games that were ever made but whenever I see Halo mentioned anywhere there are a ton of people who get all up in arms about it. I thought all video game nerds love Halo but I was wrong. In fact, nerds hate Halo! They hate it because the same people who kicked their asses in high school are now kicking their ass in a video game. Halo has introduced a ton of non-nerds, namely the loud college dorm types, to video games. Relatively normal people who don’t spend 90 percent of their life extolling the virtues of their favorite Japanese RPG developer to anyone who would dare cross them are playing video games. For the first time ever, people with actual skin pigment are picking up a controller and shooting at stupid aliens made up of polygons, texture maps, and lies. The nerds feel threatened by it.

Nerds try to hide it. Whenever Halo is mentioned they say, “Well, Halo is just a generic shooter and only morons play it and there are so many better shooters that I would never waste my time with such a generic and stupid game such as Halo!” And then they pull out the latest Jap card battle game or angst-ridden jackass RPG. “Saken Denatsu no Tsunaji Naga Waka 2 is art, and Halo is not! ONLY STUPID JOCKS PLAY HALO!!!” How do you know you are dealing with one of these insane video game elitists? Simple, they refer to their favorite games as “titles”. You see, Japanese RPGs are not games, they are “titles”, as in, “Final Fantasy X was the most brilliant title of last year and Halo was the worst game.” Your entertainment is just entertainment but my entertainment is art!

I am sick and tired of art. Who cares if something is art? That’s no compliment. “Film is an ARTFORM and television is just trash for the masses!” Well, a guy shitting on the floor and taking a picture of it is also art.

Fuck these faggot fuck art movies and show me tits and ass. Show me heads exploding. Show me hilarious shit like a man getting hit in the groin with a football or a football getting hit by a man’s groin. Fuck Punch Drunk Love. I’d rather watch Billy Madison. Actually I’d rather not watch either but if you put a gun to my head and told me you would rape my asshole if I didn’t choose either movie within 5 seconds I would choose the option where you rape my asshole and shoot me in the head.

So these art nerd elitist video game fags think Japanese video games are more “art” than American games. I’m not sure about that but they sure do like games that feature a lot of ten year olds in short skirts. I’m talking about these games like Disgaea. I was looking at the ads for this game and they feature a girl who looks no more than 12 years old in a belly shirt. Yeah, that’s art. No it’s more like, if we ever figured out what’s actually on your computer’s hard drive, 25 to life. Look at La Pucelle Tactics. I imagine when they were designing the characters for this game the producer said to the artists, “Okay I want them to look like eight year olds but with D cups.” I’m not saying that everyone who plays Japanese video games and watches anime is a pedophile but, okay I am saying that. 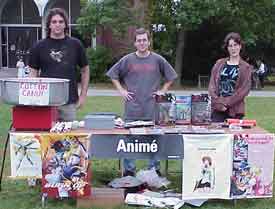 I hate these kinds of elitist Internet bigshots. These are the same jerks who hate Starbucks because Starbucks is a successful company that has experienced major growth in the last decade. They hate Electronic Arts because they raise children as slaves for the sole purpose of programming the NBA Street series. They hate McDonalds because they sold nuclear secrets to the Russians. They hate Wal-Mart because Sam Walton molested them. They hate Blockbuster because Blockbuster employees have the nerve to ask them if they would like to subscribe to their unlimited move rental program. Imagine that, a sales pitch in a store! Why, I never!

Aren’t these people annoying as fuck? I should know. I used to be one of them. Hell, I still am. Anytime one of these companies is mentioned these people feel inclined to spew forth how much they hate said company.

Bob: Hey John I’m going to Wal-Mart to pick up some headlights for my truck and maybe a gun or two.

Douchebag: WAL MART DEALS IN UNETHICAL BUSINESS PRACTICES!!! EVERYTHING THEY SELL IS MADE IN CHINESE FACTORIES!!! THEY ARE LOWERING THE STANDARD OF LIVING IN AMERICA!!!

Bob: Yeah, but they have great deals on headlights and guns.

Douchebag: THOSE HEADLIGHTS AND GUNS ARE MADE BY IMPOVERISHED CHILDREN IN TAIWAN!!!

Bob: And they do a great job.

I’ll let you in on a little secret. This secret has the potential to destroy the whole uppity nerd demographic. Come closer. A little closer. Too close. Okay, get away from me and I’ll tell you the secret. Here it is. These people don’t hate these companies because of unethical business practices or the low quality of their products. They hate them because they want to say that they are better than the people who do patronize those companies. Nobody gives a shit about children in China making shoes for Wal-Mart. If Wal-Mart was willing to pay you 30 bucks an hour to straddle a cash register for 8 hours a day you’d fucking love Wal-Mart, shoe-making children be damned. No, you want to say you are better than people who shop at Wal-Mart because you shop at Trader Joe’s like a greasy hippy. 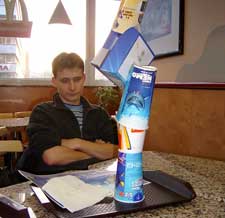 I don’t know what this moron is doing but I am pretty sure the evil corporation that is McDonalds made him do it.I don’t buy rotten grocery store cat food like 9 Lives or Friskies. I buy Wellness cat food at a local and humble pet food supply store. You think I buy that shit because it’s better for my cat? I have no fucking clue that it is. It could be filled with battery acid and shredded Bed Bath and Beyond coupons for all I know. I do it because when I buy it I feel a little better about myself inside. I am not one of the ignorant masses that purchases sub-par cat food! I like telling people that they are doing something wrong and that I am doing something right. It gives me a boost of self-confidence to think that I am somehow smarter than someone else.

You see these people on Internet forums all the time. They think they are better than other people because of the game system they use, the movie directors they like, the food they eat, or the cars they drive. How is one form of entertainment better than another? How is one fast food company better than another? How is Wendy’s better than McDonalds? They both serve food high in fat, advertise profusely, and open stores on practically every block. If you eat either company’s food every day of every week of every year you will probably get fat and die at an early age.

This is what I didn’t understand about the movie Supersize Me. One of my favorite places to eat is In ‘N’ Out Burger but if you ate their food every single day you’d become overweight as much as you would eating McDonalds food. So why was McDonalds singled out? Because they are the biggest, and one of the best ways to get attention, and possibly make some money out of it, is to attack people and companies bigger than you are. Some people watched Supersize Me only to reaffirm their belief that McDonalds is bad and whatever they do is good. When I saw the movie for the first time I went to Jack in the Box right afterwards. A lot of good that movie did, huh?

But at least I’m not one of those low-class trashy loser assholes that eats at McDonalds.