Back in 2008, a Something Awful forums poster named John Savoia outlined his blueprint for better living. Savoia proposed assigning point values to all the dogs you see in your daily activities, with various bonuses attached for those extra-special spots. It was a genius idea, one that should have immediately resulted in him being presented with a check for one million dollars by two bikini-clad ladies with empty eyes.

I latched onto the idea very quickly. Initially, I was fine with Savoia's happy-go-lucky rules, but found myself dissatisfied with the lack of challenge. Over time, my views radicalized into something darker, harsher, but infinitely more rewarding. In my system, small dogs were worth negative points, and there were penalties for dogs behaving shamefully. Many, such as David Thorpe, began referring to my hardline approach as Boruff Orthodox. I never liked that name, for indeed Thorpe and others were integral in the formation of these rules.

Around this time, a Facebook group was created dedicated to the sport, championed by Savoia and SA alum Reid "Frolixo" Paskiewicz, among others. It was mostly a ghost town for years, but then something changed a few months ago. The group started exploding exponentially, as the sport of dogspotting caught on, especially in Australia. Unfortunately, the Australians proved themselves a lawless people even still, awarding points to one another with reckless abandon.

It became clear that order was needed. People needed a system by which one could accurately score any dog. It just so happens I had such a system, and yesterday it became the law of the land in the Facebook group. Naturally, this resulted in chaos, anger and people hating me. It was beautiful. In the interest of appealing to people beyond the sensitive world of Facebook, I would like to share those rules with you now. 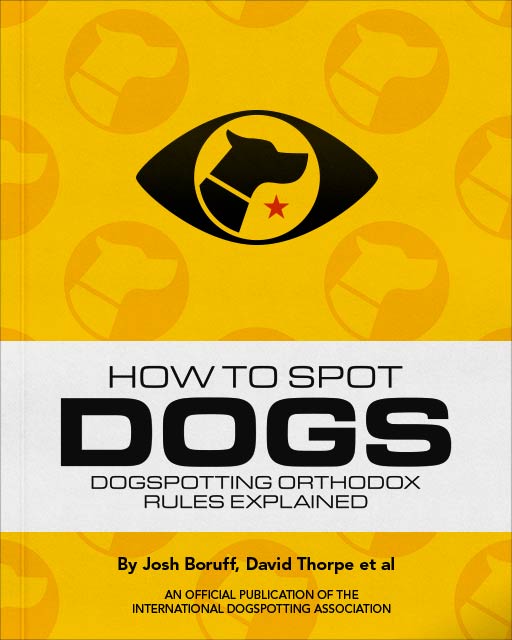 Dogspotting is the act of assigning point values to the dogs you see in your daily travels.

Dogspotting is all about spontaneity and seeing new dogs. True dogspotters never count dogs they already know, or engineer spots by visiting places like dog parks and veterinary clinics where dogs are expected. Good dogspotters embrace the unexpected, allowing each spot to be a surprising gift... or terrible curse.

With Orthodox Rules, dogspotting becomes even more fun and challenging. In addition to points for size, special spots may be eligible for bonus points, multipliers and penalties.

Look at a dog. Once you master that, you're ready for dogspotting. You must be looking at the dog's physical being with your own eyes for the spot to count; no using aids like telescopes or mirrors to achieve "trick spots."

The goal is to observe dogs in their natural state, not to get their attention. While many people like to photograph spots, this is in no way required. If you do, always be courteous and respectful of nearby humans' privacy.

With every spot, you should immediately ask and answer the following questions to determine the score.

DO YOU KNOW THE DOG?

If the answer is yes, then don't score it. This includes your own dog. "Own Dog" and "Known Dog" spots are bad form. You cannot inflate your score by amassing your own personal collection of dogs.

HOW BIG IS THE DOG?

Size acts as the base score for every dog. The bigger the better.

WHAT IS THE DOG DOING?

If the dog is doing something out of the ordinary, it may be eligible for a bonus or subject to a penalty.

IS THE DOG PART OF A SET?

Multispots occur when two or more dogs share an intrinsic or physical connection. Multispots can dramatically impact your score.

Start by sizing up the dog to find the base score. If the dog is by itself and not doing anything of note, consider that the final score for the spot.

Always base points on size. Some dogs may be bigger or smaller for their breed. NOTE: Puppies of larger breeds do not count as small dogs.