A Beginner's Guide To DOTA 2 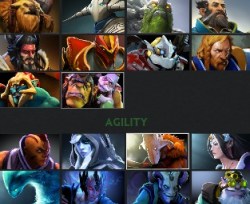 This isn't a guide for beginners. It's a guide by a beginner, a quivering wreck of a man hoping to process the trauma that took place in Valve's DOTA 2. This is the first step on a long road toward reclaiming a fraction of the confidence and dignity that I once had.

My first round of DOTA 2 felt like starting a breezy game of checkers, then realizing halfway through that I was playing interdimensional Star Trek chess against opponents that were waiting for the perfect moment to reveal that the drink I ingested ten minutes earlier had been poisoned.

It was basically exactly like that, only a little more confusing and terrifying. I loved every moment of it.

Let's start at the beginning.

Hurry Up And Pick A Guy

You need to choose a hero. There are about a million of them. Each has a unique set of abilities with in-game implications that are completely beyond your grasp. The heroes are broken down into factions, then groups such as "agility", and within those groups there are classes with seemingly helpful labels. What's a Carry? How is a Ganker different from a Pusher or an Initiator? Don't know, but you have about ten seconds left to choose. It's probably best to pick the hero that looks the coolest.

If you're smart, you'll look this stuff up before starting a match. If you aren't smart, you'll write some jokes about the obtuse nature of the game and subject yourself to angry comments from uptight jerks.

Oh, hey, you're shopping. Your teammates have already finished and are leaving. Hurry up!

There are suggested items, potions, high end items... it's basically a Sam's Club of fantasy boots and rings with incomprehensible attributes. Pick something at random from the pile of suggested starting items then try to figure out if you equipped it or just put it in your bag. Do you have a bag, or are those slots just indentations on your character's body?

Congratulations, you spent all of your money and are fairly certain that everyone else bought better items.

Three lanes branch out from your base. Choose one. Someone will ask what the fuck you think you're doing. They might even inquire as to the nature of your brain injury, your reasons for thinking you could play this game, and whether you should even exist at all.

Now choose another lane. Keep walking until you see some water. Stop. If you go in that water someone is going to kill you.

These Little Guys Will Kill You

There are these little guys called creeps that come out of each team's base, walk along each lane, then meet up in the middle (where you should be) and fight the opposing creeps. Since they're small you probably think you can wade into the fight and squish the other team's creeps. In reality, you are weak and stupid and will just bleed out all over the damn place every second you make the mistake of getting near them.

Your best bet is to hang back and watch the creeps kill each other. If you have some sort of a ranged ability, use it to turn the tide of the battle. Congratulations, now you have no mana.

By now you'll probably notice that when an enemy comes close, you'll lose control of your character and he'll chase after them in a manner that's slightly more stupid than your normal actions. Just keep cursing and telling him to move further back.

These Big Guys Will Kill You

While you're cheering your creeps on from a distance like the world's most awkward and ineffectual basketball coach, someone from the other team will appear out of thin air and make your screen go crazy.

How did they do that? Doesn't matter. There are a million abilities that you don't understand and half of them are going to hit you at the same time. Try to run to safety and another guy will pop out from behind a tree and use the other half million abilities on you. Try to stand your ground and you'll die faster as your team yells at you.

Maybe it would help if you used one of your abilities. Ha ha, just kidding. Press that button and you'll summon a bird that just hovers in place and explodes in gore when an enemy comes close, or you'll shoot a spell that seems to take off 2% of your opponent's life.

While you're frozen with indecision, be sure to forget those potions that you bought. If you do use one, prepare to be amazed by how minor the effect is.

This Tower Will Kill You

If you're fortunate enough to avoid the opposing team and help your creeps advance, you will run into a tower. Don't you dare touch that tower or go near it or attack anything near it or think about that tower you goddamn fool.

If you stay away from the tower, the guys on the other team will kill you.

You're dead. You lost a bunch of money. The opposing team got a bunch of XP, so they can buy better skills. Great. Now they have two million abilities. As you wait to respawn your team has one less person on the map, so your creeps have less backup, so you lose ground.

When you respawn, go ahead and take another look at the shop. Consider those items again, now that you know a little bit more about the game. Think about how nice it will be to buy those items, when you somehow manage to get enough money. At your current rate, you should be able to buy a new magic wand in three hours. Something to look forward to.

While you were thinking about all that, the other team won. Don't worry. You'll be much better next time, armed with everything you've learned: