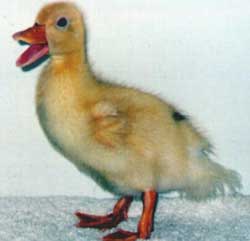 Awww...As a Something Awful front page writer it is my duty to cause you, our dear readers, to emit some sort of sound from your bodies. Whether that's a laugh or a fart is your business. Something Awful strives to write entertaining but informational articles on a variety of subjects, from watch making to watch repair. When I was asked to write my first front page article on Something Awful I was flabbergasted. What? Me? An up and coming kickboxer from Mexico, write for an internet web page? On the internet? What? I remember that first meeting with Ricardo "Lowtax" Kyanka like it was yesterday. He came into my dressing room during Mexico's kickboxing semifinal world championships. He spoke in a deep commanding tone.

"I have been watching you from a distance. You fight with the power of the Hulkster himself." he said. I was nude at the time so I covered myself with my hands.

"I am Ricardo Kyanka from the States. I have come to rescue you from Mexican kickboxing. I run an internet humor site and will pay you far below minimum wage to write articles for it. That is more than you can aspire to in this hellhole. You have 10 seconds to decide."

I didn't know what came over me that night but I went with Ricardo to the United States and wrote for his internet. At first my writing skills were poor at best. I did not know English and did not even know how to write in Spanish! Posting articles on the front page was nerve-racking. When I posted my first article a man on the forums wrote what seemed like a five page essay on why my article sucks and why I should kill myself and my children so that the world must never bear another Spokker Jones article again. But when the goings got tough I always remembered what my kickboxing coach used to tell me in Mexico, "In kickboxing you must fight dirty, because you are a dirty Mexican." I worked on my frontpage updates long and hard until I could finally write a coherent sentence. My skills increased so that I could write articles on a variety of sensitive topics such as sand, butts, and Moof. But there was always one topic that I was too afraid to write about. It was much too controversial for our audience. It would frazzle too many hairs. It would put too many soccer moms in a tizzy. It would make conservative right-wing pro-life gun nuts explode. If I were to reveal the truth then the entire world would suffer a total breakdown. But that was then. Now I feel like the world is ready. I have the strength and courage to speak the truth! The world needs to know! That's right folks.

This update is about ducks.

If it looks like a duck, and quacks like a duck, we have at least to consider the possibility that we have a small aquatic bird of the family anatidae on our hands.
- Douglas Adams

Ducks are the greatest of animals. They can run, jump, do backflips, change tires, fly backwards, and cure cancer. They don't do any of those things very often because they don't feel like it but they can. Ducks belong to the Anatidae family, which also includes geese and swans. Every year the Anatidae family has a Christmas party but many ducks don't attend because geese and swans are snobbish fucks who always get drunk and ruin everybody's fun. Ducks mainly keep to themselves and make snide comments about other birds behind their backs. Many ducks are prone to anger. Who can forget the classic Donald Duck cartoons in which the title character gets mad and hits his three nephews because it's raining and he can't play golf? We all laughed then but I cried inside. Those cartoons really hit home. I can still remember how daddy used to swat me with the belt. The belt soon turned into a baseball bat. Then a knife. Then a gun. I took daddy's gun and shot him seven times in the chest. I was a minor then and got off on self defense. I went to go live with my grandmother until she was raped and killed in a home invasion robbery. Ducks are magnificant animals but they aren't all peaches and cream. I will list the pros and cons here. 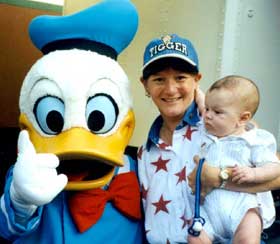 This picture was taken just seconds before Donald Duck snapped into one of his trademark angry episodes and murdered the mother and her child in cold blood. Oh Donald you card!Pros

Ducks feel that homosexuals should enjoy equal rights and be able to marry.

Ducks were the only birds who flew with the British air force during the Battle of Britain in 1940.

Ducks don't like girls who wear t-shirts that say things like, "Boys lie" and "Boys cheat". It is the girls who lie and cheat! OH CHRISTINE WHY DID YOU BREAK MY HEART!!!

Ducks are needy. As pets they need constant care and attention. They will pee inside your Gamecube if they don't get what they want!

Gamecube is for little kids and homos.

Ducks enjoy the music of Celine Dion. Scientists are baffled.

Ducks can be easily bribed with promises of low rate mortgages and low interest loan payments.

Ducks is a terrible topic to write a front page update on.

Duck duck goose is a game that promotes violence.

I'm the lamest lame duck there could be.
- George C. Wallace

There are many different types of ducks. From fat ducks, skinny ducks, to ducks who climb on rocks, there is a duck for everyone. I will list the most common types of ducks here.

Mallard: A mallard is the most common type of duck but that is okay because every Mallard is special in their own way. Some Mallards have colorful spots on their wings, and other Mallards like to beat homeless people with PVC pipe.

Lame Duck: These are ducks who are president and lost reelection but are not out of office yet. A lame duck will usually just ride out the month that he has left in office by eating nachos and chilling with his bitches.

Darkwing Duck: This duck fights crime with a variety of gadgets and always saves the day. This is the duck you want when you repeatedly get captured by bad guys. He is a rip off of Batman kind of but that's okay. 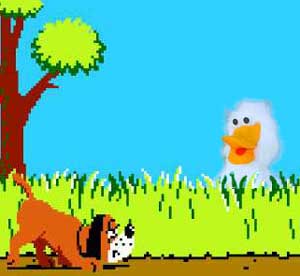 OH GOD WATCH OUT DUCK!!!Duck Hunt Duck: The stars of the highly controversial Duck Hunt came under fierce criticism in the late 80s when they agreed to portray dying ducks in the hit video game. Many pro-duck activists were amazed that ducks would participate in a video game that encourages violence against ducks. Many of the stars spoke out and stated that it was only a game and that the violence is simulated. "We're just trying to show young people the horrors of duck hunting," said one duck, "and make a damn fun game while we're at it." Nintendo declined repeated requests for comment.

Early Duck: Early Duck is a coursebook reservation program that lets you order your course books and materials online and have them boxed and waiting for you in the Book Dept on the first day of school. Get your books early with an Early Duck! Great for active college students who are always on the go!

Always behave like a duck--keep calm and unruffled on the surface but paddle like the devil underneath.
- Jacob Braude

Okay now here is some duck trivia and fun facts.

Ducks are responsible for 80 percent of underage pregnant teens in the United States alone.

A football playing duck is an amusing idea.

Ducks can drink a whole gallon of milk in under a minute.

Ducks do not buy into the hype surrounding many anticipated game releases.

Ducks are the only animals other than humans and cockroaches who mate for life with one partner.

Ducks are my favorite animals and they rock. I want to be a duck when I grow up.
-Spokker, age 6

If you should rear a duck in the heart of the Sahara, no doubt it would swim if you brought it to the Nile.
- Mark Twain