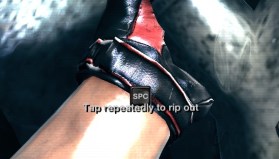 2011 is a great year for fans of dark humor, inventive gameplay, and absurd weaponry. After all, Saints Row The Third is coming out in November. It's going to be fantastic. Your gang endorses energy drinks, robs a bank while wearing commercially produced masks of its most popular member, signs autographs for cops, and has a cannon that vacuums people up and shoots them as ammo.

Since Duke Nukem Forever comes out next week, I suppose it's also a great year for fans of sadness. If the recently released demo is even remotely representative of the final experience then we're in for a mediocre mess of a shooter.

Duke Nukem Forever swipes concepts from popular modern titles and crams them together without considering how the elements work together. The result is a unique version of the kitchen sink approach in which the developer adds infinite kitchen sinks without a kitchen counter or plumbing and hopes for the best. This is unsurprising, as cohesive games with well-considered designs come from developers that set clear goals, and if DNF had someone capable of that it would have been finished in the 90s.

Duke Nukem 3D was, in many ways, vibrant and colorful. This served to emphasize the game's sci-fi elements, its humor, and the surreal nature of the universe. Guns were detailed, silly, and fun to look at. Environmental details popped in a way that made exploration intuitive and rewarding. Enemies - as stupid as they were - were easy to spot and visually interesting. This aesthetic, whether intentional or not, went a long way toward establishing the game's tone.

After more than fifteen years of technological advancement, Duke Nukem Forever is dreary, dark, and devoid of character. Models are relatively realistic, shadowy, and subject to all sorts of blurring and lighting effects. This might sound technically impressive, but in practice it only contributes to the game's oddly depressing vibe. The game feels more empty than the interactions between actors in a Kinect stage presentations at E3.

Guns that were ridiculous in Duke Nukem 3D now appear drab. Enemies become mundane. Trudging through the environment to find interactive objects feels hollow and somehow unpleasant. Even humor falls flat in this unremarkable, muted world, though most of that can be attributed to the writing. 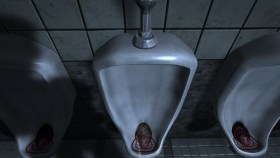 The demo begins with a urinal. You press a button to pee, and you press another button to flush. This is a perfect opening, as it demonstrates the game's complete lack of humor and creativity. Naughty and/or silly things are placed in the game, and the developers are so content with the existence of those things that they don't exert the effort to do anything genuinely funny with them.

You poke around a locker room, finding more interactive objects such as sinks and showers. There's poop, and you can pick up that poop and throw it. No joke has a punchline in this game. If you lack a sense of humor but love to giggle or are a fan of Tosh.0 you'll probably bust a gut throughout Duke Nukem Forever.

Eventually you fight the Cycloid from Duke Nukem 3D, strafing while shooting at him with rockets. Once you whittle his health down, you are asked to mash a button repeatedly to finish the boss off. Why? Because modern video games. 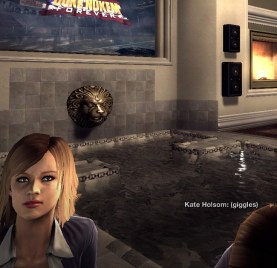 Next you drive a monster truck through a desert canyon. As you progress, magical weightless boulders roll at you. They take the easiest path forward, moving slowly like hollow shells and having absolutely no impact on their surroundings - sort of like everyone involved with this game.

Soon your truck runs out of gas. Here we see Duke's dialog in action:

"Aw, and it got such good gas mileage."

What? All these years in development and that's the line you go with?

In Duke Nukem 3D, Duke's voice was the worst conscience a player could have, and it was great. He tossed out movie lines, occasionally commented on moments of violence with quirky bravado, and was more goofy than intimidating. Here, he just seems like an unfunny asshole that vomits the following dialog into an already creepy world:

Back to Duke's truck, which needs gas even though it apparently got such good gas mileage. You set off into the gorge on foot and encounter dozens of pig cops, which are now just body-builder pigs. I think. Everything was really dark and blurry, and when I shot guys they just sort of burst into polygonal chunks of blood.

Gunplay is all sorts of weird. Since Halo had a two weapon limit, Duke Nukem Forever has a two weapon limit. This means that you'll be seeing a lot of "Press Button to pick up weapon" prompts, backtracking to find rocket launchers and generally being conservative rather than experimenting and moving forward. It doesn't make the game more tactical, as some people have claimed. It just means that when you think "this situation calls for this specific weapon", instead of switching to that weapon you will attempt to spot it in the environment, run to it, then hold a button for a few seconds to pick it up.

Also, your health is surprisingly low. After taking two or three shots you'll need to find cover and regenerate for a bit. At first I thought that this did a poor job of representing the swagger of Duke Nukem, but then I realized that the current Duke has a lot to be ashamed of, so hiding behind cover is appropriate.

I've already seen people defend the demo by claiming, "No one expects a good game or fun gunplay or decent graphics, we just want a good Duke game and this will probably be one." First of all, if that's you, die. Second, you won't get either of those things. Instead, you will get an aggressively mediocre shooter that has a lot of things but doesn't know what to do with any of them, much like a dog with a helicopter and ten thousand medical licenses.