Your Band is Great!

Normally, I reserve this space for profanity-filled tirades about a) music that brings joy to idiots, and b) the glaring flaws otherwise intelligent people overlook in popular bands because they're too lost in the lens flare from their beloved rock stars' sparkling eyes. However, in the spirit of Lovedump, a sub-forum dedicated to friendliness and positivity, I've decided to change my ways, at least for a week. Jesse "kingcobweb" Mason, resident music expert of the Something Awful Forums, started the "Your Band is Great!" thread in Lovedump to compliment people's listening choices, and he's joined me here to expand upon his reassurances. Prepare to feel validated! 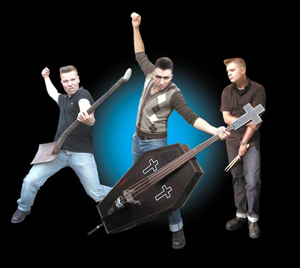 Psychobilly
kcw: Punk fused with other genres leads to some of my favorite music ever, and when it's combined with great rhythms, horror themes, and vocals that sound like a lunatic has been set free (that's a good thing!), there's nothing better. Psychobilly definitely has one of my favorite aesthetics in all music. Plus, the first band T-shirt I ever bought was The Cramps. It says "Bad Music for Bad People," which is the title of one of their compilations, but that slogan isn't really accurate because it's actually good music, and good people like good music!

GD: Psychobilly bands not only use the stand-up bass, which gives an air of jazzy class to their fast songs about cars and the devil, but they also do tricks with it, like tossing it into the air and catching it (it's really heavy!) and standing on top of it while making faces and playing sped-up surf solos. Because of this kind of spectacle, psychobilly is even better live than on record! People keep going to see Reverend Horton Heat in concert, even though they couldn't name a song off his past five albums, and this is fine with him, because he hardly plays any songs off those albums.

kcw: I bet you are a really fun person to be around and really sincere in your feelings. You would be a nice friend that I could introduce to my other friends and we would all be friends while listening to really powerful music. I could go to you whenever I had a problem that I wouldn't feel comfortable telling other people, and you would know exactly what I meant and be really helpful.

Fiveace Attorney: I would never make your friends listen to my overwrought sad music so we can listen to hip hop or something!

kcw: I understand that you are trying to be a good friend, but we would all enjoy your music because it's really emotional and artful and beautiful!

GD: Usually when you lose track of time while listening to music, this is an ominous sign that means you were just abducted by aliens as the radio played during a lonely drive on a country highway, or that you're attending an Incubus concert. But with instrumental post-rock, live or recorded, you can zone out in a state of blissful immersion, and return refreshed after the song or performance has ended. Within these genres you'll find some groups that might be considered derivative, but you'll never encounter groups that are actually bad to the point of being unlistenable. You can safely sample bands from a long list of recommendations without worrying that any of them could ruin your day!

Sneaker Pimps
kcw: Sometimes hip hop can get really angry and scary, so it's nice that I can listen to something similar but way more pleasing, especially when I'm already in kind of a bad mood. It's like a warm blanket, except the blanket is made of drum breaks and scratching. Plus, instead of rapping, I get a sweet singer calming me down. It's like a fat-free food: all the stuff I want to enjoy, but nothing that could drag it down with guilt over what I'm consuming.

GD: Most one-hit-wonder songs from the '90s aged poorly, like Beck's "Loser," but Sneaker Pimps' "6 Underground" still sounds fresh. Most people's knowledge of Sneaker Pimps begins and ends with that song, if it begins at all, but the band's songwriter Chris Corner still records with his own band IAMX, which has achieved modest success overseas. Trip hop produced some great albums, and because the genre didn't last long enough to become an embarrassing self-parody or mutate into something stupid, people can look back at it with untainted nostalgia! 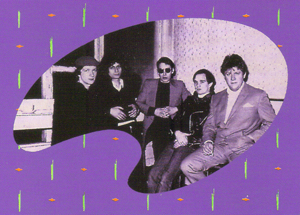 Squeeze
kcw: Oh wow, I never knew who did that song "Tempted" before! It's pretty. It was used in an ad that was on TV years ago, so it reminds me of watching Nickelodeon or Cartoon Network or whatever I was doing when that ad was airing. Man, those were good times. My childhood was mostly pretty great, so thanks for reminding me of that! By the way, if it turns out that the ad was actually from like 2004, I don't want to hear about it. Also, I'm pretty sure that song is about Bad Things, which is a strange combination with such a happy-sounding track.

GD: Squeeze actually specializes in happy-sounding tracks about Bad Things. When the grindcore band Lawnmower Deth decided to make a concept album about happiness, they included a cover of Squeeze's "Up The Junction." Musically, it was a brilliant decision, because the hook couldn't be cheerier. But lyrically, it's a depressing song about a man whose wife leaves him for a soldier (taking their daughter with her) because of his rampant alcoholism. Squeeze also sings about sex a lot, which usually makes me uncomfortable, but in their case it works, either because the words are really obtuse or because the melodies are so giddy that they make it impossible to feel dirty!

Canibus
kcw: A lot of people try to portray artists like Common and Talib Kweli as "real hip hop," and malign artists like Canibus as just "gangster" stuff. The fact is, though, that the opposite of conscious hip hop (stupid? unconscious? I don't know what to call it) is just way better. The rhymes are tighter and the metaphors are more elaborate, with realistic portrayals of things instead of relentlessly uplifting songs about how great hip hop is. Plus, the beats are grittier and more aggressive instead of trying to appeal to moms. In this case, there is a legitimate reason why the style of certain artists is more popular than others.

GD: I'll never forget the first Canibus line I heard, from more than a decade ago: "I'll strip you naked, and make you hug a cactus, you bastard." It's such a crazy threat, for so many different reasons! Also, it brings to mind the heartwarming film America's Sweethearts, in which cutie John Cusack hugs a cactus for some romantic and/or comedic reason, and when the police ask what he's doing while he tugs the needles with his back turned to them, he says "pulling out the prickers," leading them to believe he's actually doing something naughty! Canibus is an American Sweetheart, even though Eminem called him "Canada-bis" to be mean, which wasn't really a good insult because Canada is a great place with charming people and sophisticated culture!

Canibus gets into lots of feuds, with Eminem, and L.L. Cool J, and Wyclef, and Jay-Z, but none of them turned into physical fights, because he's really just a teddy bear who knows a lot of science words. His 2001 album C True Hollywood Stories was not very good, but he has since explained that it was intended as a work of satire, and if his devoted fans have accepted that explanation, why shouldn't I also give him the benefit of the doubt? Canibus started in a crew called The Heralds of Extreme Metaphors: That's a man who really loves language!