I spot the Familytainment Media booth. A small crowd -- maybe four men or so - gathers around as Donald Clinksdale introduces his company's exhibit, a dab of Caesar dressing still fresh on his chin. "We are proud to announce that this September we are launching a brand new Familytainment franchise: Horse Groomer Carnival Games. We plan on having twelve different titles at launch, all for the Nintendo Wii. By the holiday season, we'll have thirty more that we can trick grandparents into buying." The men cheer. Donald suddenly notices my presence and hides behind a cardboard cut-out of a horse. There's a scream from another corner of the room, and I can see Gerry Wiltman tearing down his Horsecomber 89 banner. 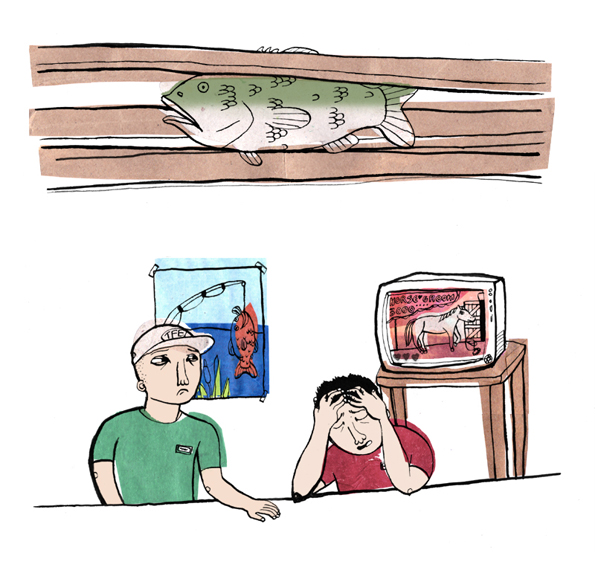 "Donald is a real bargainware industry leader," says Tony Welf. The Truck Fishin Entertainment logo on Tony's hat is drawn on with a marker. He pauses to watch his booth neighbor Gerry crying beneath the paper mache large-mouth bass Tony had wedged into the rafters above their booths. As far as I can tell, the crude paper fish is the only thing Tony has on display. "Everyone down here thinks they've got the next Imagine Party Babyz, but Don's got a proven track record. Do you know how many copies of Barnyard Carnival Party Games were sold and then immediately returned after Christmas morning?" It was under five hundred, but Tony was still impressed.

At this point, many of the booths are deserted. Some developers spot a man restocking the soda machine. They surround him and try to haggle with him for the rights to the Pepsiman license.