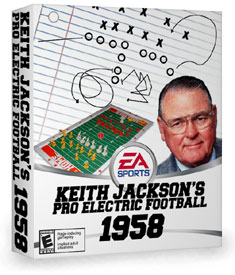 Folks, the pig’s in the poke and the turkey’s in the fryer and the cow’s teetering over a large barbeque pit! Whoa, Nellie!

Hello, I’m Keith Jackson. And if you remember my long-winded and unclear color commentary metaphors like the one above, you must be sixty. But more importantly, you’re from an era when men were men, and even some women were men- but America was so tough that we just let this problem work itself out, like with civil rights and such. Now, in the half century I’ve been a sportscaster, I’ve witnessed many tragedies. And as much as I would love to tell you about how Howard Cosell’s secret retarded slave child eventually chewed through his restraints and murdered his father, the subject of today has to deal with the unfortunate downfall of football.

I’m no dummy - I know that nothing can fix the real NFL. They recruit large, dangerous men who end up retiring because of homicide convictions after three years of bulking up on rage-inducing drugs. If I did not have the safety of my skybox I swear I’d be taking each and every one of those monsters out with the sniper rifle I stole from Al Michaels. But even the simulated NFL has its problems. The other day I went over to visit my grandsons – and maybe it was because of all the cocktails I made on the ride over – but I couldn’t make heads or tails of that damn Madden video game they’re so crazy about. Maybe it’s because I’ve had the joy of sitting an entire Superbowl with John “Tough Actin’ Tinactin” Madden in a control booth the size of Robert Reich’s race car bed. Folks, it was like being trapped in Satan’s asshole after a chili dinner.

With all of this evidence, you have no doubt come to the same conclusion I have: the only way to recover the magic of this once leathery sport full of leathery men is to bring back the only simulation that ever made any sense: electric football. And thanks to my new endorsement deal with EA sports, this fantasy can come true in any America home with electricity (sorry, The South). 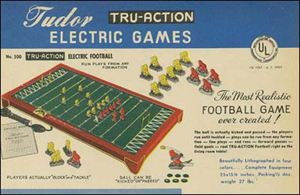 Tragically, the first electric football games required a team of engineers to operate(not included) and cost $5000, which was a lot of money back then.

As wonderful and perfect as it is, electric football did not come into creation as the result of some magic imp’s conjuring. Two Oklahoma brothers, Charlie and Ransom Stonkhowser, had the misfortune of growing up in the Dust Bowl: an era where the only fun to be had was running for your life from the massive soul-destroying hurricanes of dirt that roamed the Midwest. But even if you had the fortune of not living in the moon-like geography of this region, if you were a child you had only four games available for indoor playtime: “eat circus peanuts and not vomit,” “don’t die from polio,” “don’t die from polio bonus round: tuberculosis,” and “stare at the radio and imagine naked ladies.” From this boredom came Charlie and Ransom’s – and perhaps humanity’s – greatest creation.

Electric football was spawned by the two brothers in 1936 during a break in a particularly nasty 18 month dust storm. Once the children of Charlie and Ransom’s small town got used to the entirely new phenomenon known as “sunlight,” the brothers and the rest of the nearby children assembled a small football game. A game… that would end in tragedy.

What the children didn’t realize was that the end of the dust storm was just a break; it wasn’t too long before nature had humanity over a barrel once again. It was the second play, in fact, when the sky split open and unleashed a torrent of grit at unimaginable speeds. The children on the “away” team were eroded instantly as the Stonkhowser brothers fled to their run-down country cottage where they did not emerge for ten years. No one is quite sure of the unimaginable horrors that took place during those long years in the Stonkhowser house, but the seclusion of Charlie and Ransom led to the creation of electric football.

Following these events, the brothers sold their idea to the Tudor toy company, bought expensive planes in order to fight the evil clouds that menaced their childhoods, and promptly died.