You folks can take your blast processing this and your force feedback that and stick ‘em in your sweet pentunia! The beautiful simplicity of electric football cannot be recreated by any of your modern supercomputers or large, intelligent refrigerators. Although the technology used to power electric football – giant tubes which would often increase household temperatures 50 to 60 degrees and make housepets dangerously violent – was once harmful, in these modern times it’s never been easier to vibrate a large sheet of metal! And in the off-season, mom or Girlfriend Sally will have loads of fun with many of the game board’s optional uses, such as “pick up the moving quarter without using your hands!” 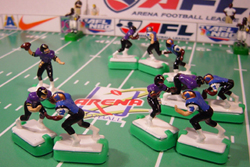 Is it real, or is it electric football? Your guess is as good as mine! (ANSWER: ELECTRIC FOOTBALL)

As you can see, every game of Keith Jackson’s Pro Electric Football 1958 is more varied than Terry Bradshaw’s complex albino DNA! Folks, the man has a tail with a hand on the end of it.