Just like any other sport played over the last 50 years, electric football has a significant legacy to it. Yes, your real football has events like The Immaculate Reception, The Miracle on Ice, and Tom Landry’s famous killing spree when he thought his famous hat was stolen; electric football is not lacking any of these moments. There are at least six. Listen folks, as electric football’s primary historian, I can only do so much. Record keeping would be a lot easier if this game wasn’t played mostly by the illiterate.

Prepare to be astounded by ELECTRIC FOOTBALL’S GREATEST MOMENTS! 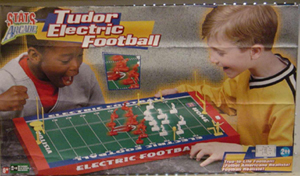 With the abolition of the ELF Negro Leagues, exciting multi-cultural game boxes such as this one were produced. Here, a young Alfonso Ribeiro is clearly enjoying himself.