SA has served up lots of scary stuff this October, from spooky skeletons to freaked-out faces. But horror isn't all animated bones and haunted-house jump scares; for example, psychological horror shows like The Outer Limits/The Twilight Zone/Black Mirror deliver disturbing insights into modern inhumanity through the use of grim dramatic irony. Turns out the Forum Goons, being thoroughly saturated with irony, are uniquely equipped to come up with some frighteningly plausible storylines!

A scientist who's out to prove his world-changing theory has a robot servant that he repeatedly berates. The closer the scientist gets to the answer, the more irrational and abusive he becomes, belittling the robot for every tiny mistake and hurling insults constantly. The robot passively accepts every indignity because it is an emotionless machine.

Finally, the efforts of a lifetime come down to a single experiment that will make or break the scientist's whole career. Just as he is about to throw the switch, the robot starts clearing away the scientist's uneaten lunch and accidentally knocks over a vial of chemicals, ruining the experiment.

"I am sorry, doctor. I am so clumsy," the robot apologizes mechanically as it watches the scientist wail in despair.

Was it really an accident? Fade out on the robot's dispassionate expression. 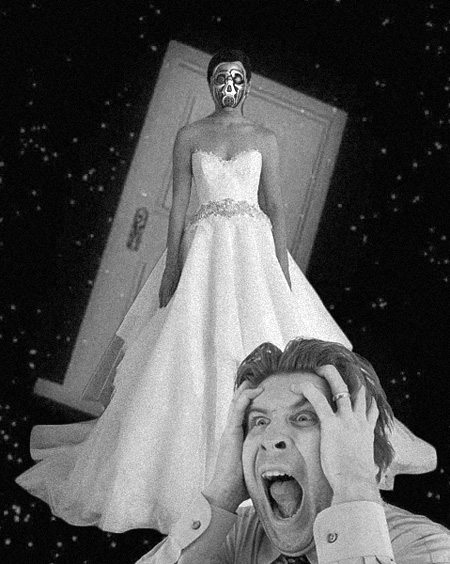 A woman becomes concerned about her husband's increasing reliance on their household robotic servants. He later revels to her that she herself is a robot, implanted with artificial memories. She divorces him and takes half of his shit.

A carnival sideshow features a mirror that only shows people what they hate most about themselves. Everyone who looks into it is driven to depression and suicide. The mirror is condemned as evil and an angry mob smashes it to pieces.

It turns out it was just a normal mirror.

Man has recurring nightmare in which a doppelganger of himself is attempting to kill him. After a while, he refuses to sleep. As a result of his sleeplessness, he clumsily bumps into a large mirror that falls on him and squishes him.

An old man on the verge of death pays a priest to be his 24-hour companion for the remainder of his life so that he may confess and be forgiven for all his sins as they occur so that he can be a bastard and still get into Heaven.

However, when the pair dies in an accident, both men end up in Hell. When the old man demands to know why, he finds out that the "priest" was actually a con man who was robbing him blind.

An astronomer discovers there is a planet heading on a direct collision course with Earth! Earth's governments and scientists do everything they can but are ultimately powerless to escape their doom. Just as the planets collide and explode, the camera zooms way out until the scene resolves into the image of a physicist at the controls of a powerful cyclotron. He and his team have just split the atom for the first time. They pop a bottle of champagne to celebrate.

A kid lies to his school chums about his Uncle at Nintendo and exploits this fictitious family connection to gain respect on the playground and to bully other children. However, when the upcoming games he lies about start coming out for real, he starts getting a little freaked out. Then games start getting released that mention him by name and portray him in unflattering ways. He becomes the laughingstock of the school and eventually the humiliation becomes so severe that he shuts down from interactions with the other children completely.

It turns out one of the kids he bullied really DID have an uncle at Nintendo (it was the quiet Japanese boy who never speaks the entire episode and who gets called racist names by the liar kid). The Japanese kid smiles to himself as the formerly popular liar kid sulks in the back of the class.