Something Awful (and Rifftrax): in movie theaters TODAY!

Today, Wednesday, August the 17th at 7:00 PM CST, Something Awful will appear in hundreds of movie theaters across America! That's correct: you'll soon be able to watch two of our unreleased, animated shorts on the exact same movie screens previously used to show legitimately entertaining, professional films! I'm pretty sure that lends us credibility by proxy.

As an added bonus, we decided to pad out the remaining 85 minutes of the show with some sort of live performance by a group of guys from something called "Rifftrax." Apparently they watch terrible movies and make fun of them, much like they did back when they all had some TV program called "Mystery Science Theater 3000." I personally never watched the show, but I heard it's like a cross between "Sports Night" and "The Wonder Years"... in space. When Mike Nelson, Kevin Murphy, and Bill Corbett heard I was planning on filling hundreds of movie theaters with Something Awful, they begged me for a part in the show. 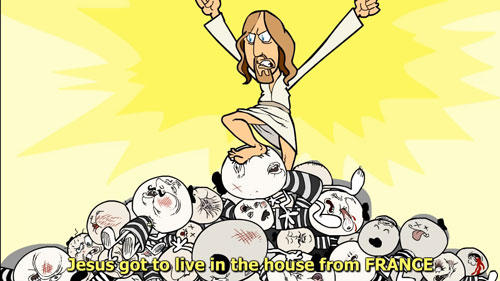 A sneak preview from one of our upcoming shorts.

"Please, Rich 'Lowtax' Kyanka," pleaded Mike as tears streamed down his face, which I noticed was significantly less handsome than mine. "Let myself and the rest of the Rifftrax crew have some part in your exciting, groundbreaking theatrical extravaganza."

"I don't know, Mike. Fans of Something Awful have grown to expect a certain level of inherent quality that can only be provided by our site," I replied, trying to soften the blow. "Do you think Rifftrax is sufficiently talented and experienced enough to fill 85 minutes with fart jokes?"

Mike pondered the question before the grim shadow of realization darkened his eyes. "Probably not," he conceded, slumping defeatedly.

"Oh well, fuck it," I said, and agreed to let Rifftrax fill the remaining 85 minutes of the show. And now you know the whole story. Although the press release seems slightly biased, I'm going to quote it for you nice folks anyway.

Something Awful (with Rifftrax)

The stars of Mystery Science Theater 3000 are coming to movie theaters nationwide to take on the cheesy 1962 fantasy epic Jack the Giant Killer. Michael J. Nelson, Kevin Murphy and Bill Corbett of RiffTrax invite you to join them on Wednesday, August 17th for hilarious riffing on a not-so-classic movie bursting with Vikings, giant rubber monsters and a leprechaun in a jar! This one night event will be your only chance to see the guys fire their wisecracking commentary at Jack the Giant Killer on the big screen.

The event will be broadcast live to movie theaters nationwide on Wednesday, August 17 at 8:00pm ET / 7:00pm CT / 6:00pm MT / and 8:00pm PT (tape delay). Audiences will be treated to a brand new short from the guys, as well as two original animated shorts from Rich "Lowtax" Kyanka of Something Awful.

There is literally not a single legitimate reason for you to not attend this exciting, monumental event which shall perpetually reverberate throughout the halls of American history like a used urine sample container in a wind tunnel. In other words, BUY YOUR TICKETS RIGHT NOW. Shmorky, Garbage Day, and I will be in Kansas CIty, personally attending the Cinemark Palace at The Plaza show, so if you'd like to come and sit on our laps, now's your chance:

I look forward to seeing you all there tonight! Oh, and please keep this in mind: if you don't show up, you're a horrible person with incurable personality flaws, and you will never be loved by another human being for as long as you live. 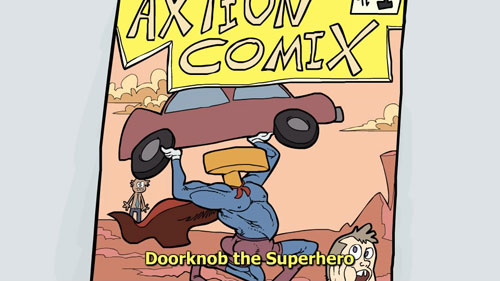 Another sneak peek. How could you afford to miss this?!?