The Fandangling Fables of Groggery Gibbonman

'Between DXVI and DXXI, Groggery Tirade Gibbonman took summer residence in a balloon rigged high above an uncharted bog. This was to serve three purposes: Firstly, it allowed him time to write. Secondly, it afforded an excellent view of the bogs by which to chart them. And lastly, it fulfilled a series of court-ordered sentences.' - Azure Lufthaus, A Pocket History of Aerial Prisons 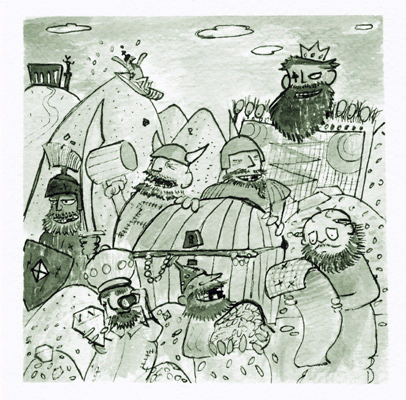 Once, in a hilly land many horizons and a couple zeniths away, there marauded a motley bunch of bandits. Fearsome and merciless were they, pillaging and looting every hamlet, caravan and grave they found. Heist by heist, they rose in renown, until eventually they reached the highest echelon of the thieving profession: robbing deathbed treasures from the clutches of ancient kings.

As luck would have it there were no fewer than nine crypts of nine such kings in this far-off land, and yet none had been disturbed, for every local young or old believed a terrible minotaur lived within one king's crypt. Which mausoleum this minotaur called home was unknown, and so the cautious had always turned back from plunder.

But bandits spit on caution (as well as many other things). With not so much as a cough of dissent, they rudely prodded the great marble door to the first king's crypt with a gnarled old battering ram, until the stone cracked and crumbled, and the architecture yawned with treasure. So it was the next night, as the bandits cracked open a 2nd king's crypt, and found it even fatter with riches. Fatter still was the 3rd crypt, 'til every bandit in their troupe was dripping with gold and silver.

It was on the night of the 4th crypt when the first hesitant hiccup could be heard. The bandits' mapmaker, a beardy little man with nubs of pencils above both ears, counted the X's on his map of the valley aloud, concerned. But when the bandits smashed open the 4th crypt, gold and jewels again sparkled to greet them, and the mapmaker's mutterings were shouted down by his rowdy brethren.

The bandits soon emptied the 5th crypt, and the 6th, growing wealthier and bolder each night (while the map-maker complained louder and louder, and was shushed more and more forcefully). The 7th and the 8th crypts went no differently (though after the 8th the mapmaker seemed quite upset), until finally the filthy rich bandits, now accompanied by a great train of servants and dancing girls, arrived at the final, 9th crypt of the final, 9th king.

The bandits wasted no time in readying their battering ram (or rather, they ordered their servants to do so), but the mapmaker stood in their way. "Stop!" he cried. "I could not convince you when our chances were turning, and I could not stop you when our chances were bad, but now our chances are nil! We have no chance at all!" He started pointing as he pleaded. "Plus look at these ominous glyphs, and these obvious hoofprints..."

By this point the bandits had heard quite enough of the mapmaker's constant whining about "evidence" and his learned speculations about how "if my translations are correct, these glyphs say 'greed equals minotaur!'" They ran him through with their scimitars, tore down the 9th crypt's marble gates and cheered together in triumph right up until the minotaur ate them. 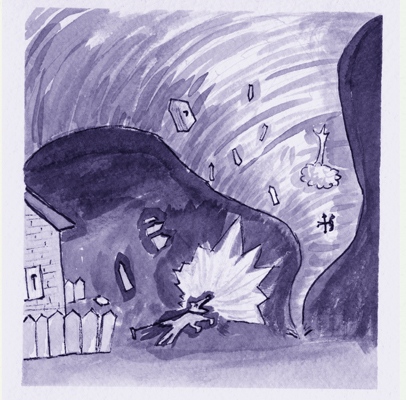 It is said (by whom it is unknown, heard by whom even more so) that once a horrible windstorm brewed above an otherwise friendly land. At first the windstorm was content to churn, but soon it wanted to tumble, and presently it desired to spin, until finally it decided to throw caution to itself and flat-out whirl into a cyclone.

The cyclone skipped merrily across the fields and roads, funneling one, tunneling two, pummeling three, four, five houses to splinters in its path. As it ripped up a grove of trees like a child plucking dandelions, the cyclone beheld a great big juicy house ahead of it, and spun its way hungrily forward like a fat black top.

In the back yard of the house, fenced in neatly, was an old hound dog that had been left outside in the storm by hasty error of his masters. He strained at his tether as he yapped at the approaching cyclone.

"You'd better back off!" the hound barked furiously at the intruder. "Or I'll bite you!"

The cyclone shrieked with shrill laughter at the thought of the hound's little teeth sinking into nothing but wind, and advanced its path of mayhem. But the hound proved equally unafraid.

"I'll rip you to ribbons!" the unflinching hound yapped. "I'll bury your bones in the sky!"

"Pff, I don't even have bones" the cyclone thought to itself, though it could not help but miss a step as it glanced up at the sky momentarily. At least it thought it didn't have any.

The fence uprooted and flew through the cyclone like chaff, but the hound remained, barking louder than ever above the terrible din of the screaming winds.

"I'll tear you to tatters and drag you to hell!" the hound foamed, his eyes crossed with magnificent anger. "I am the king of you and my word is divine law made manifest! REPENT FOR I AM THE GOD OF STORMS!!!"

The cyclone, whose misgivings had quickly turned to shock as the hound's fury poured up at it, and who certainly did not want to anger a god that sounded like had jurisdiction here, accidentally spun around the wrong way in terror and in the process ceased to exist.

Their skies now calm again, the people who lived in the house returned there and for many years credited providence for sparing them. But their very proud hound knew better. 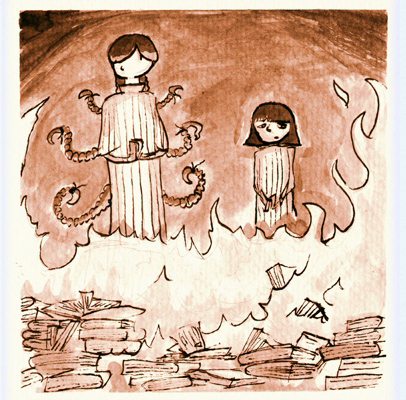 Not nearly as long ago as you might prefer, in a thatched-roof house found in the farthest town of the farthest land yet, there lived two thoughtful little sisters. The older sister, whose long braids were the envy of many, was thin and tall, mischievous and secretive, giggling at pranks and fibs all day. The younger sister, by contrast, had her hair cut short to match her stature, and she wiled away the hours with books as her quiet companion.

Little Sister loved stories about goblins and ghosts, or any monster who could give her a fright. Every story would end with something awful happening to the poor children, but she always reminded herself (after the giddy shivers had passed) that it was just pretend.

Big Sister, on the other hand, preferred her tricks to be real. She began by yelling insults at other girls from behind tall grass, but this lost its charm for her. So she began to insult girls to their faces. And then she began to hit. Eventually, Big Sister preferred that Little Sister watch her as she hit people, which Little Sister found uncomfortable but put up with so as not to get hit herself. She just read her stories and tried not to think about it.

One day, Big Sister swung a large stick she'd felt particularly excited about hitting someone with, but this time the girl did not get up afterward. Big Sister became very quiet as she realized the girl would not get up ever again. Little Sister began to cry.

"We're going to be in trouble!" Little Sister wailed, clutching her favorite book to her chest and sobbing. "You play too hard! This isn't fun like a story anymore!"

But Big Sister was not listening, she was thinking. She grabbed Little Sister's book from her and ran into the town square, yelling "Help! Help! A book made me and my sister hurt someone!" with crocodile tears flying.

The townsfolk came quickly to where Little Sister was still standing by the dead girl, dumbstruck. Big Sister pointed to the scary parts she remembered from the readings, fiends and ogres pulling tricks on people, and said "this made us bad! It's not our faults!" so convincingly that even Little Sister nodded mindlessly in agreement. The townsfolk thumbed through a few chapters, had a funeral, then started gathering all the books in a pyre.

As the book pile burned, Little Sister looked out at all the disappearing pages of adventures and pictures and lessons, and suddenly felt very sad. But Big Sister stared at the flames and grinned, thinking of all the other fun things she could try now.

"Aren't you glad I saved you?" Big Sister whispered.

The moral of the story is: There's no such thing as fictional monsters.