The Simpsons to Crossover with the Older, Better Simpsons 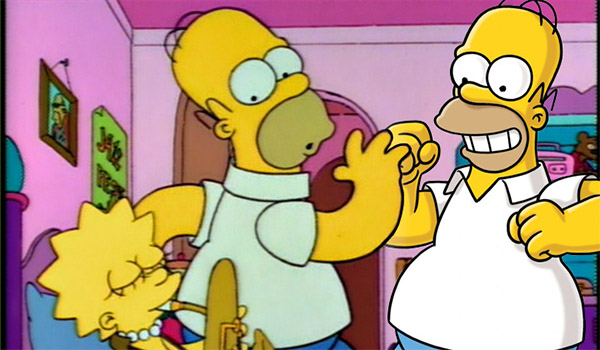 After nearly 25 years on the air, and recent pairings with Family Guy and Futurama, The Simpsons are getting ready to crossover with an unlikely group: themselves.

"It's a purely creative decision we think will boost our appeal with males ages 30-45," says Simpsons executive producer Al Jean. After working on the show's early years, Jean returned in 2001, and he's been at the helm ever since. But as he enters his fifteenth consecutive season of running The Simpsons, this veteran comedy writer is looking for some new challenges.

"Don't get me wrong," says Jean. " We still put in some pretty long hours. Just yesterday, we had to dial back our regular two-hour In-N-Out lunch to 90 minutes so we could put the finishing touches on a script. Have you ever wondered what would happen if Moe the bartender got Ebola? Well, market research tells us 63% of our audience is. We're hoping it'll still be relevant when the episode airs next October."

Though The Simpsons was widely regarded as one of the smartest shows on television, the past 16 years have been an uphill climb for this once-groundbreaking comedy. This upcoming crossover is engineered to bring back old fans of the show while giving current ones exactly what they crave. And to do this, Jean's team has made some serious changes to the well-oiled machine known as The Simpsons. He explains:

"For the current-day versions of the characters, it'll be business as usual. But when Homer, Bart, and the other ones travel back in time to 1994, those characters will be written the old-fashioned way. We'll be pulling all-nighters again, and at least half of the jokes won't be filtered through focus groups," says Jean, with a bit of trepidation in his voice. "And the same goes for our voice actors, too. We made it very clear to Julie Kavner that she won't be recording Marge's lines from her bathtub, which has been the case for the last five seasons of the show. Even Harry Shearer has cleaned up his act: At the table read for this episode, he only spat on two of us."

The upcoming episode, titled "Hot Dog Time Machine," will throw the Simpsons back twenty years to revisit what most fans view as the show's golden years. "We think up the names of episodes first and then start writing from there," says Jean. "It's the key to our success, really--'Do'hzen' and 'The Ranier Wolfcastle of Wall Street' have been our most creatively successful episodes of the past few years, and these ideas all came from billboards our writers saw while driving to work. This crossover episode will have The Simpsons order hot dogs with chili peppers so spicy, they actually go back in time! But is it really a hallucination? Only a coyote played by country legend Hank Williams Jr. knows for sure! In our 25 years' worth of episodes, it's rare to find an idea we've never tried."

Even though it seems nothing can stop The Simpsons, it's hard to ignore the practical issues that may affect the show's future. Notable cast member Harry Shearer entered his seventh decade last year, and other actors have surpassed their characters' actual ages by decades. But this isn't a concern for the future of The Simpsons, according to Jean.

"The latest contract negotiations with our actors will give us access to their vocal chords upon their death, and scientists working at Fox News Corp have assured us we will have the technology to reanimate these parts by the year 2024. Who knows: by the time season 35 airs, Mr. Burns might be played by wet pieces of throat flesh slapping together via currents of electricity. What adventures will he be having then?"

Even though this new episode poses some unique challenges to The Simpsons crew, they're not without help, as Jean explains. "We only really have to write ten minutes' worth of episode because we've got an epic, eight-minute couch gag for this episode from the folks at Universal--it's absolutely crawling with those Minion things. I don't know what they are, but our social media advisors practically guaranteed this thing would go viral. And isn't that what's really important?"